Doyle's first appearance was in The Butterfly Effect. 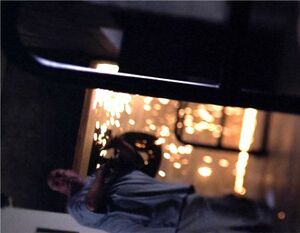 On the spolier for Heroes, it says that his power will be mind control. Should it be said now, or wait until the episode?

Seems to me like a good name would be physical manipulation...or Forced Mimicry...or just Puppeteering

When was he locked up in Level 5?

The graphic novel opens "two years ago" which would be 2005 based on the series' present being 2007, but then a couple pages later, October 2006 is identified as being "two years later" from that, which would imply that Doyle was locked up in 2004. My only idea is that they fudged the date knowingly figuring late October 2004 is close enough to 2005 that they could just round down to "two years." - Only3Penguins

The categories say that Eric has the mark, but his Assignment Tracker doesn't mention any marks or scars on him. Did I miss a scene where you could see it on his neck or something?--Piemanmoo 23:06, 11 December 2008 (EST)

Noah injected him with a pneumatic syringe after Claire took him out. I'm actually doubting this a bit; I don't think that was the same syringe that causes marks, but a mere tranquilizer. I'd have to rewatch the episode to be sure. Sincerely, Thrashmeister [ U | T | C ] 23:08, 11 December 2008 (EST)

I was really glad to see Doyle get one last really badass moment on this show, and how better to do that than have him control Sylar? Sent chills down my spine. --Ricard Desi 10:35, 16 December 2008 (EST)

IceGhost78 i like his nickname for claire. very nice

IceGhost78 this is very debatable my friend, how did sylar find Doyle after Claire helped him, and we didnt see Sylar that entire episode

Should we change Eric's picture? This one is kind of creepy, and recently Eric's been a good person, so shouldn't his picture resemble it instead of the creepy guy he used to be? A lot of people have previously gotten picture updates, so why not? But then again, this is a pretty good picture and he could change back to being creepy all over again. I don't know. It's just an idea.--Spexile 20:37, 24 April 2009 (EDT)

I just got done watching Nowhere Man Part 4 and at the end he shuts the door from across the room with his hand. So does he now have telekineses (sp)?--OutbackZack 21:10, 11 May 2009 (EDT)

2009 (EDT) It wont get hard to draw the line as long as the writers keep the story straight and not mess up like they did with shape shifting. Plus, I dont see anyway that these abilities are getting closer together: Doyle can only control joint movements and Sylar can move anything with his mind. Daevon21:31, 15 June 2009 (EDT)

There's no need to create an archive of a character's history if they've only appeared in one season. That's what this page is for. Otherwise we're sending people to another page, and summarizing on this page that which is on another page. Now if Doyle is to appear extensively in another season (say, for S&G, at least four episodes), then the archive page would make complete sense. Ditto if he has a detailed life outside of the episodes (like Rachel Mills). But until that happens, we can leave the history on this page. Likewise, if he appeared or was discussed extensively in previous seasons (like Arthur Petrelli), an archive might be warranted. -- RyanGibsonStewart (talk) 15:18, 19 August 2009 (EDT)

Someone went ahead and made a summary page because of Doyle's reappearance and potential new material (the upcoming istory and maybe even later episodes) so I went ahead and filled in the recap instead of leaving it as a stub. If this still seems unnecessary or premature, please feel free to change it back, no hard feelings. Thanks for your time. Shallon 21:05, 4 December 2009 (EST)

I'm very happy that Doyle is being given his own happy ending after all he's been through. Even though he was a villain I really wanted to see things work for him. Hopefully he'll be able to continue on with his sense of belonging after whatever goes down with Samuel. Though I don't agree with Samuel's motives I think that the carnival itself is a necessary and good place. I think more then anything his little screen time exemplifies the theme of this volume (Redemption) more then anything else we've seen so far. I just have one question though - did Samuel find Doyle after the events of Nowhere Man? Or did Nowhere Man happen before Doyle was gifted to Danko by Sylar? Thanks for your time. Shallon 13:03, 1 December 2009 (EST)

If Eric joined the carnival, and Lauren is nowhere to be seen, I'm afraid something bad happened. Maybe they broke up, or she could be even dead.

I think Eric was present at Joseph's funeral. In the very beginning, as "Volume Five: Redemption" fades, carnies can be seen from above (although not too clear), and there was a fat man who wore a hat. He wasn't shown after that. The odds are negligibly small, but Eric did join the carnival before Joseph's death...

There's a conversation above this to change Doyle's main image, but it's a little buried now. Doyle isn't the same creepy misogynistic rapist he once was, and his image should probably be changed to reflect this. I think that the image to the right is a potential candidate, it shows him at the carnival and he doesn't look as sketchy. He doesn't look very handsome I suppose, but, he's not a very handsome guy.--PJDEP - Need further explanation? 21:30, 1 January 2010 (EST) 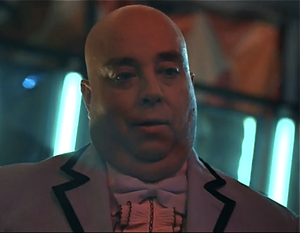 The whole scene with Doyle yelling at Claire for being in Samuel's trailer was a little out of character for him. Just last episode he was hugging Claire and talking gently with her and then one day later he's ready to kill her. I mean, yeah I can see him upset about his normal life being ruined, but I don't think he would get that emotional. -Vampirate68 | Talk | Contribs | 20:24, 5 January 2010 (EST)

Anyone else sick of this guy?

Where did Doyle's newfound confidence stem from when he fought Sylar? I mean, considering their track record (2-0), you'd think Doyle would be scared out of his mind, or at least refrain from making smart-ass remarks.--PJDEP - Need further explanation? 22:45, 8 February 2010 (EST)