Brave New World is a book that takes place one year after the fateful events of the Odessa Summit. The world is a very different place: it's no longer friendly for evos as they are held responsible for what happened on June 13, 2014. The book follows the same events as the episode Brave New World. The book is written by David Bishop, edited by Allan Guthrie, with cover art by Rubine. 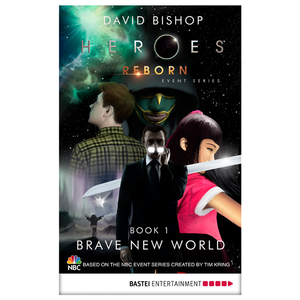 This is the original cover art for Brave New World, designed by Rubine.

The book very closely follows the the Heroes Reborn episode Brave New World, from the order of the events to the dialog the characters speak. In fact, author David Bishop said that every scene in the book, including those that he added, were originally scripted by Tim Kring. Bishop added details and described things in much more depth, but the main action was originally written by Kring. Some of the additional scenes and details in the book that aren't shown in the episode include a few new characters, a lot of the thoughts and motivations of existing characters, and various details that simply get cut in the limited time allotted to a filmed television show.

Each chapter begins with an excerpt from a different source, including extracts from Escalating Evolution, an article called The Odessa Files, and online messages about the game Evernow. Each scene is told from a different character's perspective. Sometimes the same scene might be told in sections, each from various perspectives. For instance, the scene in which Tommy meets Luke at Moe's is told alternately from the point of view of Emily, Tommy, Joanne, and Luke.

The book can be neatly summarized the same as the episode Brave New World. For additional scenes and information, see below.

The following characters are featured exclusively in the novel Brave New World.

Differences from the Episode

The book very closely follows the events as they occur in the Heroes Reborn episode Brave New World. Events happen in the same order, characters have the exact same lines, scenes are described as they appear onscreen. As with the format of most books, there are certain details that can be expounded on more in a book than in a filmed episode. For instance, the book has the following scenes, details, and information not found in the episode.

Most of the other differences between the book and the episode are very minor. Some of the differences include: