Ryan: Hi Josh, how are you doing! 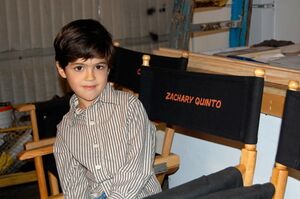 Josh: It's really good, actually. I like the games we play--there's a lot of games involved. A lot of mathematics games.

Ryan: Do you like reading? Are you a good reader?

Josh: Yes, I do. I'm actually at a fourth grade reading level.

Ryan: Oh, I just read Ramona and Her Father last November! Have you ever read Ramona Quimby, Age 8? It won an award for the best children's book the year it was written.

Josh: I haven't yet. But I read Ramona and Her Father. That one won an award, too. It's really good.

Ryan: Sounds like you really like Beverly Cleary. You know, she's my second favorite author. You know who my first is? Roald Dahl.

Josh: I love him! He's my second favorite! I've read Charlie and the Chocolate Factory, Charlie and the Great Glass Elevator. Let's see: I just finished reading James and the Giant Peach. Oh, and Danny, the Champion of the World. I also read Matilda--it's my record holder for [the book I read with the most amount of] pages. It's 261 pages!

Ryan: That's a long book! Josh, tell me why you wanted to become an actor.

Josh: Well, I got to see my mom's videos--she's a documentary producer. So I always watched her. After I watched her a lot of times, I wanted to become an actor.

Ryan: Have you ever had any training to be an actor? 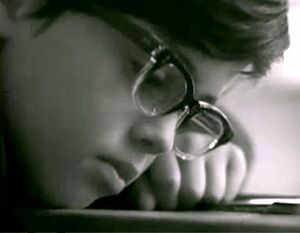 Ryan: What do they teach you?

Josh: They teach you how to do cold readings, how to share the stage, how to cry if you need to.

Ryan: How do you cry if you need to?

Josh: It's a few things. There's a few different techniques. There's a trigger. There's stare techniques. There's a few. What works for me is a combination of both. On Heroes, I had to cry all the way at the end when I saw my mom dead. What they did was they used a special effect called "tear" and they squirted it in my eye. All it is is salt water, but it makes it look like it's a tear running down my face.

Ryan: What were you thinking about during that scene?

Josh: I didn't know how to cry then. I was trying to make myself cry, but I couldn't. So finally, the special effects person came over and put the tear in my eye that made it look like I had a tear.

Ryan: How did you get the job for Heroes?

Josh: I auditioned and I got a callback. That means that the casting director likes me. So I went to the callback, and then I got the part. And now here I am, on TV!

Ryan: Was that cool to see yourself on TV?

Josh: Yeah, it really was! [laughs]

Ryan: But you've been on TV before, right?

Ryan: What was it like being on Private Practice compared with being on Heroes?

Josh: I shot on Private Practice for more days, and we were only in one location. And on Heroes, we went to two different locations. The first day I was on set. The second day I was on location. The inside scene was shot at the Heroes studio. It was really nice there--that was the diner. And then the second scene, on the outside where you see the Chevrolet truck, that was on location, sort of in the desert. There it was actually an abandoned restaurant. It was also a really good temperature that day.

Ryan: So tell me about the first part of the scene, when you were inside the diner. What were you thinking about? 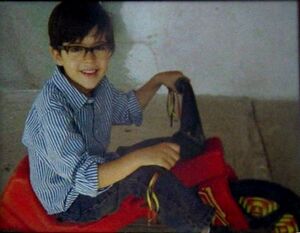 Josh: Well, I didn't really have that much to think about. The director just told me to walk in with my dad. I go over and my dad points to a table. I sit down at the table and wait for him. Then I'm playing with my car, and I start playing with it on the railing. I don't notice it and it just runs along and it falls. I'm pretty sure there's some sort of tube. And that tube leads down into a cabinet where later you see Sylar open that cabinet-like thing and he finds the car. [The director] did ask me to be sad. I think the outside part was the harder part.

Ryan: What do you remember about that part?

Josh: When you see my mom with that thing cut in her head--it was really creepy. I actually got to touch that. It was made of, like, wax. I also remember I had to say "Mommy". I can perform the line for you right now.

Ryan: I'd love that.

Josh: Well, the director told me what to do, just like in the other scene. He made me a few landmarks. First I'm starting on the sidewalk by the door of the restaurant. Then I walk to a place to where a few plants are. And from those plants, I go over to my mom. And the the director says, "BLOOD!" And then I'm supposed to react to a lot of blood flowing out. And then the camera turns over and sees his mom. And also I'm supposed to cry and say, "Mommeee? [softer] Mommy." And gradually get louder. I had to say, "[whispering] Mommeee. [slightly louder] Mommy? [even louder] Mo-ommy?" And then, "[very loud] MOMMY?!" And then I have to say it really loud and then it echoes and all that.

Ryan: You know, that was a really sad scene. When I was watching it, I was thinking about my son, who's about your age, and it made me cry. I'm going to guess that I wasn't the only one you made cry.

Ryan: Josh, what was the best part about working on Heroes?

Josh: It was all pretty great, really. But craft services is always my favorite part.

Ryan: Of course! What did you eat?

Josh: Man, that's hard to remember! [pause] A lot of cookies and pie and stuff like that. 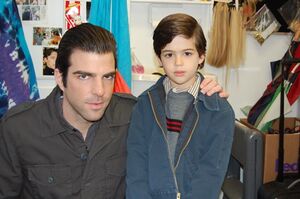 Ryan: Did you get to meet anybody?

Josh: Oh, you mean Zach. He was a very nice guy. We only saw him once in hair and makeup, so I didn't really develop a relationship with him. Do you remember when you saw Sylar, and then [the camera] whips around and you see me? Well Sylar was there, but I didn't notice him. Do you remember how on one side [the diner] was kind of old looking? On the other side, it's kind of newer looking. Sylar and the other guy were in the old part, and I was in the new part.

Ryan: You know, you had to play Sylar when he was younger. So do you think you're going to grow up to look like Zach Quinto?

Josh: My dad looks like him, so yeeeaah. He's doing his impression of him right now and I'm tingling.

Ryan: Is there anything else you want to say?

Josh: I really enjoyed being on Heroes. It was really fun.

Ryan: Well, I'd really like to see you back on Heroes.

Josh: I would really appreciate being back on set because the crew was really nice to me! It was fun playing Sylar.