In August 2015, Ryan Gibson Stewart interviewed the creative team behind the Dark Matters webisodes: director-producer Tanner Kling and producer Chris Hanada. For an interview with the writer of Dark Matters, see Interview:Zach Craley.

Ryan Stewart: How did the idea for Dark Matters come about?

Tanner Kling: It was a kind of a slow-burn. Since Heroes (the original), we've remained in touch with Tim [Kring] that a pre-launch "digital" component was part of the plan. It wasn't long before we were in touch with Carole Angelo at NBC Digital who was amazing in shepherding the project through, particularly during the early days where there were so many unknowns as to what the main series was going to be.

Chris Hanada: In terms of developing the storylines -- [script writer] Zach [Craley] could speak to that much more as he was in the room every step of the way.

Ryan: What were your biggest challenges in creating Dark Matters?

Tanner: I would say the coordination and tandem work that needed to go into it so that everything lined up. As with previous digital series we've done, we were ahead of main unit -- we essentially started working before there was even a production office set up for Heroes Reborn. So in the development stage there were still many unknowns and fluid aspects to the main series that we were trying to nail down not just for story purposes, but budgetarily and logistically. At that point we were still deciding whether to shoot the webseries here in LA, or move it up to Toronto as we weren't sure just how much connective tissue there would be between the two. 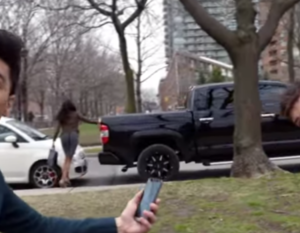 Ryan: There's about 45 minutes of content with Dark Matters. What scenes were the most difficult to direct or write? Why?

Tanner: The one-off found footage videos were difficult, and it seems many folks don't know that we produced four videos that seeded out prior to Dark Matters. That was a careful balancing act because we were looking to create videos that fit into popular YouTube genres (i.e. parkour videos, Dash Cam, etc.) and they needed to be both grounded (feel real) but have the extra special element that made people "look twice" right? Clearly some are more obvious than others. My favorite is the one where a woman pushes a car in the background -- that to me was the sweet spot, very subtle and feels real. However, you're trying to get people's attention, so subtly isn't really the name of the game. Really nailing those in terms of the scenarios and how we executed [them] were the most challenging in my opinion.

Chris: Uh Tanner, you're forgetting about our first day of shooting! We closed the road up by the Toronto Zoo for the traffic jam outside of Odessa. It was literally dumping rain and about 35 degrees though we were supposed to be doubling for a hot day in Texas. Zach hastily wrote some lines for the reporter just in case we needed them that said something to the effect of, "And the brutal heat and drought in Odessa has been given some relief by a cloud burst thanks to the work of an Evo." We managed to get most of the shots done in between storms but I pretty much wore out my phone battery constantly checking the weather updates.

Ryan: Where were the Dark Matters scenes shot?

Tanner: Production on Heroes Reborn episode 1 had started by the time we got going, so we shot the entire series in Toronto in order to be closer to main unit. Henry [Zebrowski] had started working so we had to work around his schedule in episode one.

Chris: We filmed the college scenes at the University of Toronto Scarborough campus and apparently they film there all the time. The Renautas scenes were at the Corus building. A lot of scenes were shot at the Marine Terminal that has standing sets to work for the dorm room and Quentin's apartment but also work as the Homeland Security Center and Hospital.

Ryan: We loved Dark Matters so much, and enjoyed that it debuted on the Heroes Reborn app. Will Dark Matters be made available outside of the app? Or in other countries than the USA?

Tanner: Yes. In fact by the time this interview goes live, [the series] will already be available VOD, OTT, and EST which includes international distribution. 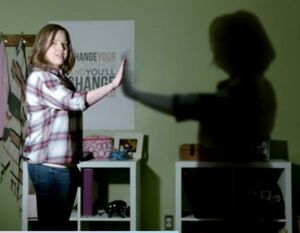 Ryan: Is there any chance that the "This is my nth attempt" video snippets from Part 1 will be released in their fullness, rather than the edited clips that Hero Truther showed?

Tanner: Not really, because essentially what you saw is what was written and shot. These videos don't really exist in full-form. So other than the young woman who floats in the air, and Rob Brewer, the guitar guy, you don't see what abilities the other people can display. That's due to budget constraints. I would have loved to produce complete "My attempt" videos that could live on their own!

Ryan: Dark Matters features the largest cast of characters and extras of any of the Heroes webisodes, the most displays of abilities, the most expansive story so far. Where do you go from here?

Tanner: Good question! Who knows what Tim Kring has in store next?

For an interview with the writer of Dark Matters, see Interview:Zach Craley.