Ryan Stewart: How did you go about sharing director responsibilities? What challenges did co-directing present?

Chris Hanada and Tanner Kling: Having worked together for the past five years and having been friends for over ten surely helped. But mostly, I think it was the fact that we had all the conversations about framing, coverage, and characters during pre-production, so we were never making any big decisions on the shoot days. It really helped to go in with a game plan.

We shot this whole series in two days, so our pace was very intense, especially on the first day where we had five or six different locations to shoot in one large office complex. We covered something like eight or nine pages that day, so the only way to get it done was to have a very precise plan and shotlist in place beforehand. Since we had already agreed upon everything, we were actually able to split up some of the duties to keep the production moving if multiple things were happening at once.

How did you juggle your Heroes work with other responsibilities, like running Retrofit, or making the Gossip Girl webisodes?

It was not easy! We essentially did it by neglecting every other aspect of our lives.

The two webseries were worked on nearly simultaneously. We were flying back and forth to New York to cast and prep Gossip Girl at the same time we were prepping Heroes in L.A. We shot the first interviews of Gossip Girl on one weekend then flew right back to prep and shoot Heroes two weeks later. We frantically worked with the editor to lock picture on Nowhere Man and then left for our big NYC shoot, literally, the next day. We had a great team helping us out both during production and post-production and we couldn't have done it without them. Many of them had worked on previous webisodes with us, so we had full faith in them.

All productions like these are collaborative. On Going Postal and The Recruit (which just won two Webby awards and a Telly award--yeah!) we were working not only in a producing capacity (finding and hiring crew, scouting locations, equipment, etc.) but also as advisors to the directors to help them get everything we needed in a very short amount of time. On Nowhere Man we passed a lot of the day-to-day producing duties over to Gunnar Clancey (who was our line-producer on all our other webisodes) so we could focus more exclusively on directing. Since we came in with a clear and unified vision, it worked out well. We also know Dennis Hammer, Timm Keppler, and Jim Martin well enough by this point that we were able to have a very open and earnest line of communication between us, and it really was a fun and productive team. 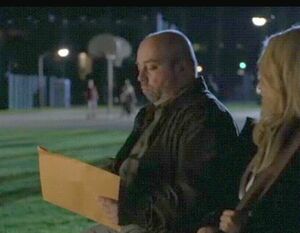 What kind of preparations did you make before filming Nowhere Man?

One of the most important preparations was the location scout--this was key as we needed to be very strategic with our use of locations. If you count, there are technically nine different locations (Jason's cubicle, Jason's apartment, office supply room, Dilman's office, hospital waiting room, hospital parking lot, Copy Kingdom parking lot, Costa Verde park, and the warehouse). For a two-day shoot, that's a lot!

We also had a table read which was very productive. The actors were very strong and great to work with so it was a thrill to see them bring the script to life.

In an article at Business Week, you discuss shooting the Nowhere Man webisodes with the "Red One", a low-cost HD camera. Did the savings enable you to add anything extra to the webseries? How did you creatively use your resources during filming?

Hmmmm. We had a smaller budget this time around, but honestly the choice to use the Red didn't come out of a cost-based decision as much as it was our desire to try it out. Being a relatively new piece of equipment, we had had trouble convincing the powers-that-be to let us use it on past webisodes.

They agreed to be part of the experiment this time around and everyone on all levels was amazed by the filmic quality it gave to the Nowhere Man series. Tim Kring and Dennis Hammer were both on set with us and they were very impressed by the look of the footage. 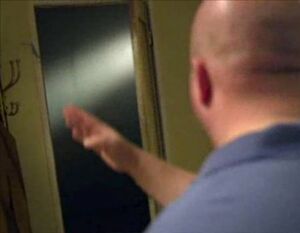 How long did the filming process take to complete? Can you tell us about some of the longer days of filming? What was the hardest scene in Nowhere Man to direct?

The series was shot in two days and they both felt very long, but we rarely went into OT (overtime) and, if we did, it was only an hour or so. We had a great AD (Assistant Director) in Kristin Mente, who made sure we stuck to our schedule.

It's funny, but I think the hardest scene to film was probably the scene in the supply room where Lauren meets Jason for the first time. The room we shot in was extremely small and the blocking was difficult to shoot in a small amount of time while getting the coverage we wanted.

We also had trouble with the final scene when Dilman runs from Jason's apartment. The floorboards of that set were so creaky that we couldn't use any of the takes where Jason backs Dilman up to the door. We decided they should run the scene without walking and have Dilman run out frantically. However, it looked weird for Dilman to take the time to close the door behind him while running out.

Always against the clock, we needed to figure out how to close the door behind Dilman and still have him keep a good clip. It was David Lawrence (the actor playing Jason) who remembered that his character could move and control objects as well as people. So the solution we all came up with was the one you see in the series: Dilman runs out and Jason closes the door with his power (aka fishing line pulled by our production designer Nick Plotquin).

How does one go about directing a piece about an ex-con (and a pretty nasty one at that) who continues to use his power for personal gain--yet is likable and is ultimately a redeemable character?

Good question! That was a challenge early on during the writing process--how do we go about making him sympathetic and prevent him from doing what he's always done?

There were a lot of discussions and meetings about this and we all decided that the way to do it was to keep the story small. It's almost a throwback to the early seasons of Heroes where we see individual characters dealing with the mundane facets of life we all face: bad bosses, dead-end jobs, struggling to make the right decisions, etc.

Once the story focused on the character's struggle to NOT use his power, then it became much easier to make him likable. It's really a testament, though, to David Lawrence's acting talent that he can create a character with such depth and range and make him believable and likable as both a villain...and a hero. 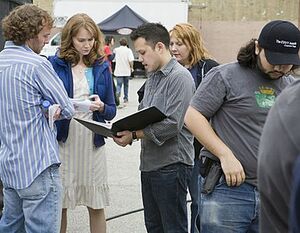 How involved were you in the casting process?

Obviously, we were already set with David Lawrence and early on it was decided we'd bring back Brian Kimmet, which was one of Dennis Hammer's brilliant ideas. One of the earlier drafts wasn't based at Copy Kingdom and had a more generic boss, but then Dennis said, "What if we brought back HRG's Copy Kingdom manager and set this at Copy Kingdom's Corporate Headquarters?" We all said, "BINGO!" Pretty much everyone remembers Brian's scenes with HRG, even if you were only a casual watcher of the show. He was so memorable in that role that you instantly despised him. Imagine our surprise when he turned out to be the nicest, friendliest guy ever!

We only needed to cast Amy Sloan. The casting directors from Heroes pulled four to five selects and we unanimously picked Amy. She's a solid actress and was great to work with. She's a strong woman, but the second you put a sweater on her she gives you this look that makes you say, "Awww...People just walk all over her, don't they? Poor thing." Which, of course, is exactly what we wanted.

Any fun stories from the set that you'd like to add?

For the amount of time pressure we were under and how quickly we had to work, we, perhaps surprisingly, had a lot of fun during the process.

Also, David Lawrence had some tips that he had learned on how to make people's mouths shut and make it look believable. Not only does he try to tap the actor (if he can) to give them a clue as to when he is going to make the motion with his hand, but he tells all the actors that it looks more believable if you fold your lips in under your teeth. If you notice, it's not just a shut mouth, but it's a shut mouth with no lips so that it feels more sealed. Who knew?!

Who is the actress who played Doyle's boss in the first episode of Nowhere Man?

The actress who played Doyle's boss is an actress friend of ours that we both knew from college, Mary O'Malley. She is dating Brian Kimmet in real life in one of those random "what a small world" coincidences. She did us a huge favor by coming in to play such a small part. Despite how short the scene is, we had a great time working with her. Wasn't she amazing?! I think we used her real name on the name tag. 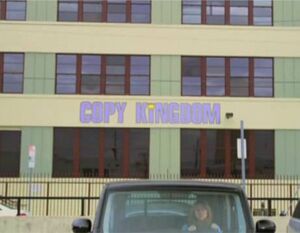 Is there anything about Nowhere Man that you'd like to add? Any interesting facts, trivial tidbits of information, or other miscellanea?

The "hospital" exterior is actually a funeral home. Our amazing VFX artist did a great comp[osite] of the "Emergency" sign onto the side of the building. It's also the same parking lot as the exterior of Copy Kingdom, but we faced a different direction so we saw a different building. We had to rush through that scene as fast as possible because there was a last minute funeral scheduled and the attendees needed to park where we were shooting.

The hospital interior, Dilman's office, Jason's cubicle, supply room, and warehouse were all shot in the same building. It's some sort of linen and textile distribution office up in North Hollywood, CA.

Some fun trivia: Jason's apartment is the same studio and apartment set that served as Emily's apartment in the webseries Conspiracy Theory which we produced and directed for the NBC show My Own Worst Enemy. Our art department (led by Nick Plotquin) did a great job making it look completely unique for Nowhere Man and one of our only regrets is that the series doesn't really convey the amount of detail that went into the dressing of that room.

Thanks so much, guys!

For an interview with the writers of Nowhere Man, see here.