On September 16, 2008, Ryan Gibson Stewart interviewed Timm Keppler and Jim Martin, the writers of the graphic novel series Into the Wild.

Let's start with the title of the novels. Why did you choose Into the Wild?

This set of novels was historic because it revealed who Evs Dropper was after an entire summer of waiting, and it ended a five-month-long story arc. When was Evs Dropper's identity decided? For instance, did Mark Sable know Connie's motives when he wrote Faces or Connie's assignment tracker profile?

Crazily enough, the answer is no. We pulled a little bit of a Lost on this one in that, we started the Evs Dropper adventure not knowing where it was going. As individual graphic novelists etched their own mark on the story, it did take a certain direction. But it really wasn't until May the two of us sat down and figured out how all these pieces fit together.

So when exactly were all the beats of the story mapped out? How closely was the plan followed, and what unexpected deviations (if any) did you take from your plan?

In late May, early June, based on the terrific Root and Branch series, we set up our entire ending. We stuck pretty closely to it, though we did make a few tweaks when the last two issues were changed to 12 pages each. That affected the pacing and where the cliffhangers landed.

Let's talk a bit about Connie. First, why did she and Penny keep Connie's maiden name rather than taking Julien's last name?

Connie's a strong character; the type of woman who, in our mind, would keep her maiden name. Julien died when Penny was very young and it seems Connie would want to protect her daughter from any questions arising from having the same last name as hundreds of clones.

That makes sense. What can you tell us about Connie that we don't know? Was there more back story that you cut?

You know, there really wasn't. We felt the heart of this character was her family. True love, a healthy daughter--she bought the cliché, and loved every minute of it. The "it" moment of her life was when that was destroyed and it informed everything she did after that. The darkness she refers to built and built over the years, until there was very little of her left.

Since we're talking about the timeline, I've got a good geeky question for you--and please forgive me for flying my nerd flag now...Okay, according to the assignment tracker map, Penny is 24 years old. However, Connie, who was born on June 22, 1963 (according to her assignment tracker profile), said she was 22 when Penny was born (according to Into the Wild, Part 2). This would place Penny's birth in 1985 or 1986, making Penny turn 24 in 2009...Am I missing something, or is there a mistake somewhere along the way?

Your math adds up. Ours however, did not. You are correct. Clearly we should stick to the writing, not the mathematics.

Well, to create a story arc this huge and only make one mistake in a character's age--that's pretty good! Going along with the timeline, when exactly does this story arc take place? When was the massacre at the bridge?

There's so much future, present, past in Heroes it's even hard for us to keep track of it all. Grant us a little creative license and we'll be your friends for life.

Having said that, it lines up pretty closely with the Season 3 premiere as you'll see the Company is even furthered weakened. Additionally, see our response to "The Bailey Case" question further down for another example of how close this story lies in terms of time to Season Three.

A little levity is granted. As I always say, "A wizard did it!" But it certainly is exciting to see how much overlap there is between the new episodes this season and the ongoing Heroes Evolutions content.

These novels briefly brought to life (and then killed) some of the agents who are featured on the interactive map and who post on Evs Dropper's blog. Can you tell me about the creation of these characters? Are there any future plans for those who remain alive?

The bulk of those characters were created by our transmedia producer (and Emmy winner) John O'Hara. He's always got lots of great ideas for online content and cross over between that world and our show. As for future plans...anything can happen. 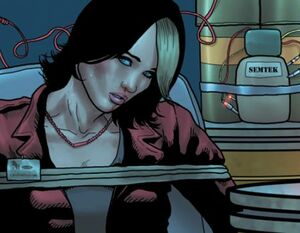 In the scene in Part 3 with the DOA agents, one of the five bodies appears to be translucent. Why?

Some specials have a power, which renders them translucent upon death.

Donna's feet were nailed to a board. Is this an allusion to Christ's crucifixion?

No, no it wasn't. We just thought it'd be a more interesting twist on the old "tied to the tracks" cliché.

What is the "Bailey Case" that Gael mentioned?

For those of you paying attention to Episode 303 on Monday, it's the last name of Bridget, the young woman Angela calls into Sylar's cell to "feed" him.

How did Gael know Sabine was pregnant?

The Company seems all-knowing with regards to their agents. In this case, they learned during a routine physical and blood test.

How can he be certain that her son will have an ability? (Other children of evolved human parents--namely Penny--didn't have abilities...)

Even if Sabine's son has no powers, he would still have clone DNA, which the Company may have plans for...

We sure hope so. We really loved this whole story arc and purposefully left the door open on it. In the world of Heroes, never say never!

Okay, time for some random questions! (As if the previous questions weren't all random!) Why was the name Eric chosen for Thompson, Jr.?

A nod to Eric Roberts who portrayed Thompson, Sr. on the show. 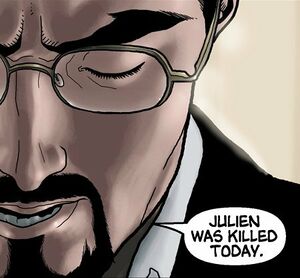 Ah, very nice! Well, if Thompson was a junior, does that mean his father was also named Eric? Or was "Junior" a nickname?

Evs Dropper's cabin is described as being "deep in the woods." Where exactly? Likewise, where exactly is that bridge Donna was tied to? (It looks somewhat familiar...)

The cabin and bridge are both approximately 20 miles from the bridge Sabine careens off before being "rescued" by Duplicate Julien and taken to see Connie.

(Our cryptic response is no accident) :)

Hrmph! ... How psyched are you about the next set up webisodes?

We're hugely excited. There's a lot of action, great characters, and a much stronger tie-in to the show than the last set. They're going to be awesome--we promise!

Is there anything else you would like to add?

We just want to thank everyone for sticking with us during the (long) break between Seasons Two and Three. This season gets even stronger and stronger as we go. Seems like people are loving it so far.

I know I am! And yes, you're right, 294 days is a long time to wait between seasons! But fans have really enjoyed the Heroes Evolutions content, the addition of the webisodes, and especially the graphic novels.

We had a great time writing graphic novels to keep you content during the summer and we're stoked to see all the positive feedback to the big finale.

A special thanks to Jason and Annette for creating such amazing artwork.

Fingers crossed for a great Webisode shoot and tune in for those online beginning on December 15!