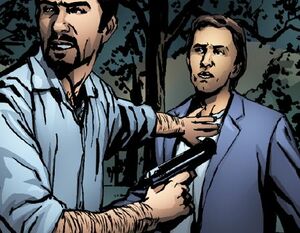 Ryan Stewart: How often do you co-write comics or collaborate your talents?

Duncan Rouleau: Steve and I worked together on the comic book Alpha Flight for over a year.

Steve Seagle: We actually had a great time working on those stories together--lots of fun, "inside" stuff we still laugh about years later--and this Heroes story was a nice chance to revisit that dynamic, by doing a story about partners.

DR: Our production company, Man of Action Studios, created the Cartoon Network show Ben 10 and Steve, Joe Kelly, Joe Casey, and I work together in different combinations for that show and others, too.

RS: How did you two coordinate your scripts with one another?

SS: We actually live right by each other so we were able to work pretty closely on the scripts.

DR: Although we still did most of it over the phone!

DR: We were given some early direction by the show guys and then just threw ideas out to each other.

SS: We went through a couple of iterations on the way to the finished Golden Handshake.

RS: Michael Gaydos penciled Parts 1, 3, and 4, while Tom Grummett penciled Part 2. Then, Chris Sotomayor colored all but Part 3, which was colored by Edgar Delgado. How did this work logistically? Did you have to coordinate with all these different artists?

SS: That was the thankless task of Chuck Kim who served as de facto editor of the online novels.

RS: Were you familiar with Heroes before writing this set of comics? How much research did you have to do, or how much was told to you?

DR: I'd seen the show, obviously, but we still had to do some digging because we were getting to play around with a back-story that was unknown.

SS: It's hard to be a comic book creator and miss a show called Heroes, I mean come on! Besides, our buddy Jeph Loeb works on it--

DR: So we had to see what he was cooking up.

SS: And then the story took place in some exotic locales, so we researched those. Most of our time was spent working out the back-story, though. Making sure it was interesting and that it had a sufficiently sinister end. 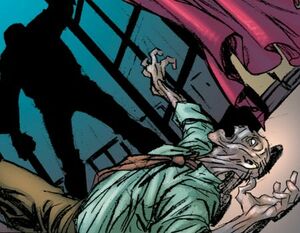 RS: How did you decide to do a story about Claude?

DR: Man of Action was given a list of characters/story threads we could address and Claude was just the guy Steve and I were most interested in of the bunch.

SS: That and Joe Kelly pushed us out of the way to get The Haitian first!

RS: If you could write another story for Heroes, which character would be the focus?

DR: For me? More Claude. Just love the idea of being invisible, what kind of person that power can make you.

SS: I'd like to do something about Sylar. My comics tend to run a bit dark, and I feel an affinity for the bad guys now and then.

RS: You created a few completely new characters, including Haram and Fusor's female friend. How do you go about fleshing out these characters?

SS: We wanted to do a lightly Hitchcockian take--mixed with those hip spy movies of the 60s. We started with the twist, that Haram thought he was chasing Fusor--

DR: But it turned out to be that Fusor was a Red Herring, that it was actually his paramour that was the real baddy. Also--we love Polanski and Cassavetes and that hardcore 70s feel!

SS: From there, we only had 22 pages, so we just picked dialogue that showed how rotten to the core they were. We actually spent most of our time on Haram--we felt sympathetic to a guy whose game is on the downslide--

RS: What part(s) of Golden Handshake are you most proud of?

SS: I'm really happy with what we were able to show in Claude--here's a guy that is willing to risk life and limb to not let his partner, who's clearly stumbling, fall.

SS: But Claude is shown to be a good guy through and through, he'll fudge reports, risk his own life, whatever it takes to help his partner. Golden Handshake is the title given to early retirement deals, but in our case--

DR: We felt like Claude's handshake, his word, was as good as gold to Haram.

SS: Too bad The Company wasn't so trustworthy... 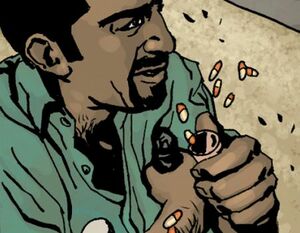 DR: It's the city of love, and we love to mess it up with super-powered throw-downs every chance we get.

RS: What's up with the medicine Haram was taking?

SS: That was just part of showing how utterly hopeless his future as an operative was. Not only did an old case come back to haunt him, but his nerves were so shot that he needed pills to stabilize his hands so he could shoot.

RS: This is officially the first Heroes graphic novel to refer to a ménage à trois. How does that make you feel?

DR: We couldn't be more proud.

RS: Speaking of firsts, Part 3 was the first novel to be presented in an animated movie format. What did you think of it?

SS: We actually wrote all the chapters for the animation, but getting the technology to synch up with our deadlines was tricky.

DR: Still, it was kind of cool--kind of retro, kind of now.

RS: I loved how the reader was tricked into thinking it was Rollo Fusor who had the power, then bam! he's dead. Great twist! How did that plot point evolve?

SS: We started with that. And actually, in Part One, it's foreshadowed by what looks to be a hostage actually turning out to be part of the trap.

DR: And then when Rollo is found dead in his apartment--it's one of those cool "you think you knew what was going on but had no idea" moments. 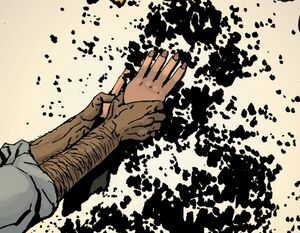 RS: So the mysterious dehydrating woman is killed by her own hand. I'm assuming she's never washed her face, then?

DR: She can touch herself, it's just that once she starts the siphon, it goes--

SS: So Haram turning her hand against her at that moment was key. She couldn't think fast enough to stop it. There is an inevitability to it that's almost...

SS: Not an enormous amount.

DR: Couple of weeks at most.

SS: The official partnership is made inside the office. This meeting was like seeing your teacher in the hall before the first day of class--she or he is still going to introduce themselves again when you get inside.

RS: So the report was fudged by Claude, sneaky devil. Is the novel a depiction of the falsified report, or is it what actually happened?

DR: It's got the falsified stuff.

RS: So Haram "retired". Euphemism for death, or is Haram off using his pension to play shuffleboard?

SS: I think Haram has shuffled off, but I don't think it's to Florida.

DR: He had a premature permanent retirement.

RS: You never revealed the woman's name. Okay, guys, it's time to spill the beans. :) 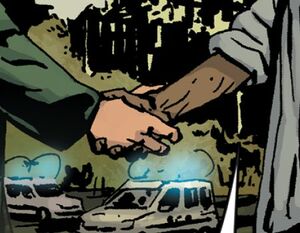 SS: Anya. I remember deciding not to name her in the dialogue, but I don't remember why.

DR: Something about the nature of that line of work. You don't even really know if you know your own partner's name.

SS: That's one of the reasons Claude is so desperate to hang onto Haram as a partner--he finally feels like he knows him. It's like a relationship--you don't want to see it go away.

DR: Because it's hard to know what your next one will be like.

RS: Thank you so much, gentlemen, for taking the time to answer some of your fans' questions. Good luck to you, and I hope we see you around again!