On May 28, 2008, RyanGibsonStewart conducted an interview via email with Jim Martin and Timm Keppler, the writers of the webisode series Nowhere Man. (For an interview with the directors of Nowhere Man, see here.) 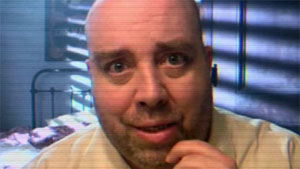 Ryan: First of all, congratulations on the two Webby awards you received for The Recruit! I hope the Nowhere Man is critically as successful as your previous webisode. It was really fun, and quite moving. Who came up with the idea of Doyle getting a "spin off"? Why Doyle?

Timm: It's a bit of a story actually. Both Jim and Dennis were big fans of the "puppy cam" phenomenon online last year. Not knowing where the puppies were, paying close attention to background noises and voices--the occasional foot or hand of an owner--it was very mysterious and engrossing. It got me thinking and I pitched the idea of having one or two of our characters trapped in a room and the audience having to figure out where they were and help them escape.

And from the outset, Jim and I wanted to use Doyle. Dennis loved the character as much as us and knew how easy it is to work with David Lawrence (important when you've got very little time to shoot), and told us to go for it.

Well after working on the story for a few stressful weeks, it became very clear it wasn't working, for a number of reasons. But we all loved the character just as much as ever, so Jim and I pitched the story of Doyle acclimating back into the "real world".

And it's funny--as soon as the story changed and became less high-concept and more heart, it just flowed--smooth sailing after that.

Jim: Timm (who I sometimes refer to as double M) is dead on. I will add just one thing: we thought it was super important to take the core of the show--the every day person dealing with the "extraordinary" circumstances--and focus on the heart, and the character rather than going the grandiose special effects route.

How do you go about writing a nasty character like Doyle, yet make him sympathetic and redeemable?

Timm: We approached the story from a place of--nasty person or not, he still has to figure out the basics of living--a job, roof over his head, maybe a friend, and some love. The fact that he's trying to overcome a tumultuous past makes it only the more dramatic and interesting. But I think everyone can relate to Doyle in this. His awkwardness around Lauren, lack of respect from Dilman--you don't have to be a puppet master to know what that feels like.

Jim: Personally, I subscribe very much to the belief that you become who you are, personality wise. You're not born a jerk, you become one. I mean--seriously--no one looks at a four-year-old kid and says, "That four-year-old is villainous!" That's something you acquire throughout your life through your experiences. Plus, all the interesting bad guys in movies were turned that way. Think about it--Darth Vader? Perfect example. Used to be a regular guy, corrupted by rage and revenge, redeemed at the end through love for his son. Well, Doyle kind of has that vibe--he wasn't always "the evil puppet master", but kind of became that because girls didn't like him, he didn't like himself, etc., then turned it around when he actually found something he cared about. That's relatable in some fashion to some people, right? 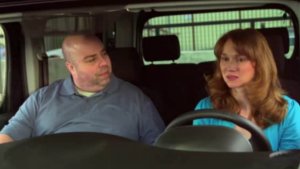 At what point does this series take place? Specifically, is this before or after Sylar "gift wrapped" Doyle and put him in Danko's apartment?

Timm: It is after Sylar delivers Doyle to Danko. Within the world of the graphic novels, Rachel helps him escape from Building 26, and after that, he's let loose into the real world.

Jim: How cool was that Sylar gift wrapping situation, by the way? Answer: VERY!

Speaking of which, how did Sylar find and capture Doyle?

When Claire meets Eric Doyle to give him a new identity, where do they meet?

Jim: You mean when they met in the park? That's a totally excellent park in Costa Verde, CA--pretty cool, right? (If you're wondering what the name of the park is, it's been changed to protect the innocent.)

Fans love it when minor characters like Noah's former Copy Kingdom manager are resurrected, given a name and story, and featured in new media. Of the hundreds of minor characters featured on Heroes over the years, how did you choose Kyle?

Timm: Well we'd written this character--a real asshole kind of boss--and told Natalie Hart (our casting director) we were after a "Brian Kimmet" type. To which she replied, "Why don't we just get Brian?" We loved the idea because, just like the fans, we love the interconnectivity of Heroes (isn't life the same?). We immediately made the necessary changes in the script.

Jim: Brian made it a really easy choice. He was in an episode from Season Two of Heroes, knocked it out of the park, and was available when we were going to be shooting these--it didn't make sense to go with anyone else.

How involved were you in the casting process?

Timm: Whereas with The Recruit where we needed to do extensive casting of new characters, with Nowhere Man, we only needed the character of Lauren. Natalie had worked with Amy before and thought she'd be a good fit and sent us over examples of her work to watch and we loved her right away. It was a very quick process and in our table read of the material it was clear everyone had the right chemistry--we were psyched.

Jim: So, I guess, like, FULLY involved, but also VERY lucky to have such a great talent pool so as to not have to spend days and weeks and months casting these roles. (I mean, we were kind of locked into DH Lawrence XVII, so that was 1/3 of the casting right there!) 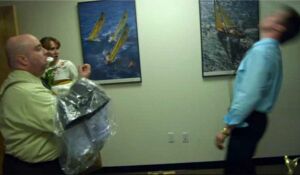 Why the decision to have Doyle shut the door using his power? Does that mean he can use his ability on more than just people?

Timm: I honestly don't remember when that came into play and how. It wasn't in the original script. I do remember David, being the expert on Doyle he is, telling us it was in line with the character overall. It's a common question we get from fans though.

Jim: In the scene where he's with Meredith, Sandra, and Claire, and he has the gun and he's going to play Russian roulette with them, he spins a gun on the table without touching it--just some really slick little puppeting. I think he can do some telekinetic control type things, but not all the time...It's kind of like hitting a three-point jump shot, though--he can't always do it. Wait...I have a better analogy! --

Timm: Well as the guy who wrote it, thank you. For me, this script was a real pleasure to write both because it's a very human story we can all relate to, and also because they were such distinct characters. It wasn't hard to switch between their voices as we worked.

Jim: My lines weren't as good, but I'm really proud of Double M. (Remember earlier when I said I called him that sometimes?) I'll take this part of the interview to mention that I didn't know people consistently breathed out of their nose until I was 12!

"Jason Tyminski" is a real person. In fact, he is a friend of Oliver Grigsby's. Does he have any idea what you have done with his name? :)

Timm: I wasn't sure, so I asked Oliver and he clarified--Jason is actually his brother-in-law and he definitely enjoyed having his name used. And in my opinion, it must feel good to have a dark character like Doyle only find redemption once he has your name. Just saying.

I will say [that] before we remembered Oliver had already given Doyle a new name, his name was Kevin Biegel who is a friend of mine and also a writer (new show coming this fall: Cougartown) and a huge fan of the show. I was bummed when we realized we couldn't give him a shout out in this way.

Jim -- I think the name Lauren Shapiro was based on someone as well right? ;-)

Jim: Actually it was indeed! My very good friend Lauren Shapiro. Funnily enough, as I'm responding to this question, she's sitting next to me typing an email! I'm going to tell her about this right now. (She laughed and said, "That's good." And also said, "I'm real and nothing like the character.") 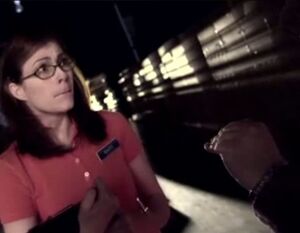 Is there anything about Nowhere Man that you'd like to add? Any interesting facts, trivial tidbits of information, or other miscellanea?

Timm: I'll just gush for a second and say how much I really loved this one. From the writing of it to the final delivery of the finished product, it went so smoothly and I'm very proud of it.

Miscellaneous info -- The series was shot in downtown Los Angeles over the course of two days. Hats off to Chris Hanada and Tanner Kling (as well as our whole crew) for moving through the material as quickly as we did. On Heroes we normally hit about 4-5 pages, but on this we completed 8-9.

Jim: Not to completely throw Timm's character into question here, BUT HE'S A LIAR! Not really. But one small amendment, we shot day one of the shoot in Panorama City, CA and day two were in downtown LA. Also, Panorama City has a really cool cowboy and western store near the offices we shot at.

Other misc info: It DOWNPOURED while we were scouting, and Dennis Hammer, Chris Hanada, Tanner Kling, and I were struck with hail when we went up to check out the Copy Kingdom offices during our prep. Hail!

You'll notice all the trophies in Dilman's office...I read a review somewhere that said it was stupid because it made his office look like a 5th grader's bedroom. That was kind of the point--we also made his tie super short, just to show that he was a total braggart who has no reason to be.

Everybody loves them some David H. Lawrence XVII. Any idea if he'll return for Season Four?

Timm: As we're apt to say at Heroes, you just never know. The character of Doyle is by far one of our favorite characters (as well as yours it would seem). And David Lawrence is a real pleasure to work with--professional and funny and engaging as a human being. Appreciative and generous. I'd personally love to see a lot more of him.

Jim: I hear that the webisodes are so famous now that he's going to launch his own series that Timm and I are going to show run. But I heard that from a floating pineapple in the fountain of youth, so I think it was in my dreams...But if that did happen, you'd see A LOT more DH Lawrence.

Thanks so much, guys!

Jim: Ryan, some day I'm going to refuse to give anyone an interview but you. It will be like you're the Matt Lauer to my Some Guy Matt Lauer Interviews.

For an interview with the directors of Nowhere Man, see here.