On October 24th, 2007, Jason Garrick held an interview via email with Diana Terranova, the actress who plays "Cindy the Cheerleader" on the popular Heroes parody, Zeroes.

Jason Garrick: Were you aware that Zeroes was an NBC creation, or did you think it was a fan video?

JG: Are there plans to do any more Zeroes sequels?

DT: Oh babay! Let me just say the birthday cake painter, Vladamier and I, have a very close relationship. You'll find out soon...lovers??? brother and sister...???... I kill him???...maybe we save the world??

JG: How did you audition for the part?

DT: They'd heard about me, I'm known for doing crazy stuff! At the audition I put my hand and foot in my mouth at the same time!!! DO NOT TRY IT AT HOME!!! I'm just a gifted girl, I kinda unhook my jaw like a snake. 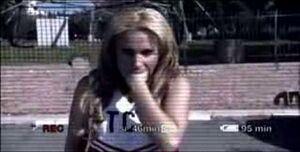 JG: Do you ever get recognized as Cindy?

JG: How the heck do you put your entire fist into your mouth?

DT: We, Heroes Zeroes excel in all that is geek, dork and loser. The question should be, "How could I NOT put my entire fist in my mouth?" I am compelled by a force beyond my understanding to do these heroic acts. When I pull my fist out, I can speak in a different language!! Really! I can also suck ramen noodles through my nose and pull them out my mouth.

JG: I see from your MySpace page that you've acted in a number of different shows. Are you looking for large recurring roles in a series as well? Do you have any roles coming up that we should watch for you in?

DT: Cindy and your favorite Heroes Zeroes will be back!! Oh and that girl, Diana Terranova, will be on Nip/Tuck, My Name is Earl, Room 401, Las Vegas. Also, I hope, at a sci-fi convention near you!

JG: Who would win in a magic battle? Harry or Hermione?

DT: Hermione of course. Harry only truly excels when faced with the dark magic, Voldemort or Dementors. Sure he can expecto-patronum and expelliarmus his way outta most situations. Hermione, is like Supreme Jedi of the Hogwarts students, she excels in everything from Herbology (uh, Devils Snare??) to Potions (Polyjuice anyone?). Don't forget, Hermione had street cred, she bitch slapped Malfoy!!

JG: Were you a cheerleader in high school?

DT: No, I didn't have money for cheer camp and the costly uniform. So I was the Mascot!!! Lucky me, I got to wear the stinky super old mascot costume. It had the funk of ten years of hyperactive mascot sweat! Every football game, people would chuck milkshakes and popcorn at my giant head. It'd crust over and the popcorn chucks would glue themselves to the outfit. I quit before basketball season.

JG: Will we possibly see your foot in your mouth or is that mainly your "signature line"?

DT: I challenge any of u out their to a you tube contest!!! Put your foot in your mouth, film it, post it. I bet I can beat you!!! I'll even use your foot if you live local!

JG: Do the other zeroes have names also or will you be Cindy and the Zeroes! Haha. Just kidding.

DT: Watch and see!!...but some may die before you even know their names…after all, they are losers, right?? Some may LIVE, MAYBE TO BE HELPED BY A FEW OF THE REAL HEROES!!