On July 16, 2008, Skywalkerrbf interviewed actress Sally Champlin by email. She played Lynette in the episodes Homecoming, Six Months Ago, and .07%.

Skywalkerrbf: Did you watch Heroes before you took the part? Do you still watch it now?

Sally Champlin: I saw the first episode and loved its cinematic look. The story concept was so fascinating - lots of story threads going on in the hands of compelling characters. I loved that it was shot on film. My film, Family Secrets, was shot on film - film is the best. The producers of Heroes are amazing, the directors the finest, and the writers brilliant. I'm very blessed to be part of their baby. 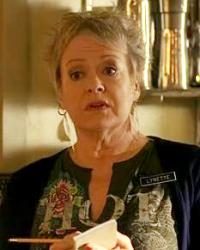 I've missed seeing more recent episodes because I've been working long hours on my website, sallychamplin.com, which is about two weeks away from launching the first episode of its podcast series, "Hollywood According to Sal", which we began shooting several months ago. By the way, folks are invited to subscribe to sallychamplin.com when they visit (they can sample and purchase some great music right now!). Anyway, after we launch HATS, new episodes will rotate in the home page window with new ones added regularly. I've also been producing some elegant music videos; great music videos are like little film jewels and I love filmmaking. Anyway, I'll plug back into Heroes in the fall. Can't miss it for long.

Do you have a favourite character or episode?

Lynette has to be my favorite character, of course. But Hiro's dilemma captivated me right away. My favourite episode is the first episode I appeared in - Homecoming. How about those origami birds? Puh-lease!

Sweetness is the first word that comes to mind. 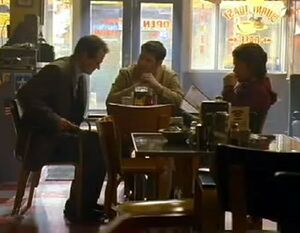 I've never seen anyone work harder or longer than this dedicated artist! His attention to detail is extraordinary.

Jack is one of the great veterans of our industry. It was an honor to have joked around with this man over a silly piece of pie and a mistakenly delivered paycheck.

Greg gives great hugs and his appetite for childish joy is a joy all by itself. Love him.

Gosh you've worked with a lot of the cast!

Hope to again too.

Do you have any stories from the set?

On one of the first days I worked the show, the numbers came out and we all knew we were the hit of the season. The attention and focus shifted subtly for everyone there that day; it certainly did for me. A hit show has its own unique flavor - ambrosia.

Did you have any lines which were cut from the final episode?

Did you enjoy working on Heroes? Was it different from any other jobs you have had?

The basics of this work don't change much from job to job. It's the people and the quality of the project that set shows like Heroes apart from the rest. It's an "A" project with the best people. As Lynette might say, "it don't get better than that, honey!"

If you could have any power, what would it be?

I would like Lynette to have the power of foresight with no way to change what she sees coming except physically, and when she does cause a change in the future, it's through how she affects another person who does the changing and not Lynette herself, who is helpless. She could be the ultimate catalyst/witness/mother-of-us-all. If Lynette carries the weight of the world around with her always, it's no wonder she walks slowly; and as she ages, she sees more clearly and the weight gets heavier. So, as she lives, it's all she can do to get from one place to another because the psychic load gets heavier by the second. Also, it's a bit like the Myth of Sisyphus - there's always another rock to roll up the hill. That might be an interesting struggle for a character like Lynette - simple woman, ever-growing burden. She might want to kill herself to escape the load. One never knows, do one?