Does anyone else find it obvious this is a formula to give people powers? Hence why everyone was screaming in the future, all the powers are being misused - plus Ando has one etc etc. --Rybo5000 12:25, September 25, 2008 (EDT)

Location of the other half

Hiro tracks Daphne to this location in Berlin, Germany: 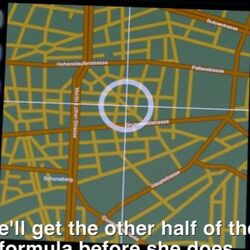 This is pretty much the same image, from Google maps: 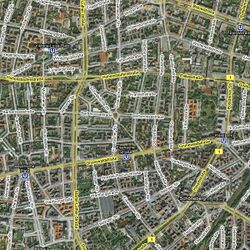 I would assume, then, that Daphne is heading toward Schwäbisch Str.: 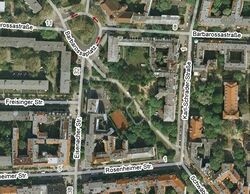 I think we should consider making this a disambig page. Formula is a pretty generic term, so this should probably be changed to something like "Kaito and Angela's formula" and Dr. Strauss's formula to alter bacterial DNA should be added to the disambig page.--MiamiVolts (talk) 01:29, 2 October 2008 (EDT)

Daphne was recruited to Pinehearst by Linderman, who was really Maury. Maury did this under Arthur's (telepathic) orders. When the "bad guys" gather after Arthur's recovery, Daphne is among them. Is it safe to say at this point that "Daphne's employer" can be listed as Arthur Petrelli? Or at the very least Pinehearst? --Johnnyd1980 08:31, 24 October 2008 (EDT)

Based on what we've seen in It's Coming, is it still safe to say that the negative aspects of Mohinder's ability (scales, oozing, etc) are still exclusive to his ability? Or is it a general side effect of the formula itself? My point is that "elephant man" had scales and physical mutations as well. So I'm not sure whether we should classify these as side effects of Mohinder's ability anymore, and instead classify them as side effects of the formula in general. Thoughts? Sincerely, Thrashmeister [ U | T | C ] 21:45, 18 November 2008 (EST)

Question on The Catalyst

Is it just me, or does anyone else think that "The Catalyst" should have its own page, seeing as how it seems to be a transferable gift, passed from Ishi to Claire Hiro, to Arthur, to the formula, then dissipates from Arthur's dead body.--Anthony Gooch 23:42, 8 December 2008 (EST)

Seeing as one of the 3 triplets that were first used had Super human strength,With the new formula, 1st super human, 2nd freezing?then Barbara's power, then flight and so on???? any body else think this? -fred1793 17:56, 10 December 2008

What the heck are you talking about? Are you saying that you think Niki, Tracy, Barbara and Nathan got their abilities in that order?--ERROR 20:56, 29 May 2009 (EDT)

I don't remember... In "Our Father," did Tracy (I believe?) state that they can now pick and choose to give a specific power? Or did she state that they are necessarily planning to research and develop that for the future (next, I presume), but can't yet? -- prander 01:47, 11 December 2008 (EST)

The latter I think, but what she was saying mainly is they can pick and choose who to give the formula too, like who is the most suited to it. Super-Hiro

Yeah it reminds me of an energy drink called Burn which is like a nicer version of Red Bull. It also reminds me of red aftershocks which aren't so nice. Bosco13 10:04, 5 May 2009 (EDT)

The Recruit, Part 1 seems to imply Mohinder's incorrect formula is still out there (perhaps that set of four doses seen at the start of the webisode?) --Ricard Desi 14:01, 18 December 2008 (EST)

Forgive me if this has been already mentioned...but was Rachel's ability definitely gained by the formula, as it says on the article? We don't actually see that, do we? Super-Hiro

So, it would appear that an incorrect version of the formula mutates the user into some kind of animal (see Mohinder and David, and even Ryan to a small degree). Rather than giving the user an ability that fits their psychology and genetics, they become an animal that fits their psychology and genetics. Should there be a new page (or alternatively, an edit to Mohinder's page) that refers to it as "The Mutation" or some such? --Ricard Desi (t,c) 21:32, 29 December 2008 (EST)

I Own the Formula!

Would you crap yourself for days if this were real?

IMO, if Nikki's power is physical and Tracy is elemental, it leaves maybe a mental power. --TrueBlueBrooklynite 23:13, 15 June 2009 (EDT)

Where did it come from? It was referred to simply as "the formula" in the show. And in GNs, if I remember it right.

How Mohinder was cured

See that wound, the same wound he had when Tracy picked him up? That's how the formula entered his body. Looks like it won't help if just spilt over somebody.