Graphic Novel:Stuck in the Middle 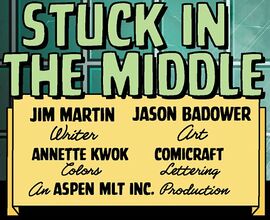 Ryan Hanover, one of the fifty two Marines selected by Tracy Strauss, writes a letter to his mother. He flashes back to one of his earlier assignments in the Middle East, and informs her that only those who came back alive were chosen. He states that he is going to save the world.

Ryan continues the letter, and tells his mom he will not come back home, as he would rather stay with the people that believe in him, unlike her. Suddenly, he hears a noise from the room next to him, and looking through a crack in the wall he spots Rachel Mills, a fellow Marine, showering. As he wonders about Rachel's personality, he overhears a conversation from another room.

Tracy and Nathan discuss their upcoming injection session, and mention the first test subject and his response to the formula. Nathan dismisses Tracy, who points out that the Marine soldiers don't know what they signed up for. Tracy claims that they're changing their DNA, while Nathan states they are making them better. Ryan climbs on a pile of boxes to hear the rest of the conversation, yet he falls, attracting reactions from both of the sides his is stuck between.

Ryan decides to flee, and encounters Rachel who just got out of the shower. She asks him if he hears a noise of someone falling, but Ryan dismisses her and claims he didn't hear anything. Back in the room, Nathan claims that no one will be surprised if any of the Marines die as a result of the test--after all, they're Marines.