Should we have a page for Molly's parents? They are certainly extremely minor characters, but there is a lot of theory that surrounds them and the reason they were killed. Necessary or not? Ryangibsonstewart 02:06, 27 November 2006 (EST)

Molly has the ability to locate anyone in the world. Remote Viewing would be the best choice for her ability as it defines; a remote viewer is expected to give information about an object that is hidden from physical view and separated at some distance. Also - i highly doubt that "Omniscience" would be an exception - as it means "All knowing" which is the ability to know all thoughts, feelings, life and the universe.

In an effort to clean up the discussion, I've extracted the name nominees from the thread:

I'd also recommend that we not develop an actual Power page for what she does until we know more about it. We're likely to learn more in the next episode. --Ted C 10:11, 8 May 2007 (EDT)

Cross-dimensional awareness Ability to detect actions and events in other dimensions. This is occasionally used in comics as an awareness of the fourth wall between the characters and the artist or audience. (wikipedia list of comicbook superpowers)

so i found echolocation which makes me lean to "geocentric psycholocation"

Echolocation Main article: Echolocation Ability to determine location of items in the environment by use of reflected sound waves, whether generated by the character or ambient sound, (Also known as Sonar Sense).

"Geocentric Psycholocation Ability to determine location of items in the WORLD by use of mental capacity, thought, or knowledge." (Hypothetical Definition)

This is like Caliban and Callisto in the Xmen universe --- only they can only track other superhumans.

I think an exercise in patience is the best method. There's no indication of her ability aside from what she said, which is "they tell me to find someone, and I can find them". If this is our only information, then I think something simple like psycholocation is fine. Personally, I don't see the need for complex phrases to describe something. Common terms like "telepathy" are fine for Heroes, even if in the "real" world, it describes the ability to hear thoughts and project them as well. The article explains the ability and its limits, not the name. Bennet calls it a tracking system, she says she can find where people are by thinking about them. Put the pieces together with word anatomy, and that's fine by me.--Bob 21:34, 8 May 2007 (EDT)

I agree it's very early here; speculating is fun. I suggest calling Molly's power findability, both as a respectful nod to the original term, and the fact it's a fun play on words: "find + ability". Sounds like she may be a human Google of sorts. :) --Torley 02:40, 9 May 2007 (EDT)

Remote viewing is the purported ability for a viewer to gather information on a remote target consisting of an object, place, or person, etc., that is hidden from the physical perception of the viewer and typically separated from the viewer at some distance.

Clairvoyance is the purported direct transference of information about an object, location or contemporary physical event

Protection from the Bogeyman

What's with the drawing of a yellow star that Molly gave Mohinder? The one where she says, "It'll project you... from the bogeyman." So is it a new aspect of her power? Or just the fantasy of a little girl? Being able to nullify powers by proxy would be an incredible useful power.--Havoc 09:57, 8 May 2007 (EDT)

Wouldn't she be more of a supporting character now, since she's obviously gonna play a very important part in the last 2 episodes? Heroe!(talk) (contribs) Random Page! 22:38, 8 May 2007 (EDT)

Haha, back when I was inventing my own characters, I came up with a character who could find other Heroes, but in a bit of a different sense. In the long run, I changed it to "Sense others with evolved abilities" (which adds on to her being blind.)

Only because I don't know how to-

Did anyone get a good Hi-Def screen-cap of this? Was there anything worthwhile in the reflection? When I looked at the individual non-HD frames, I couldn't get enough detail to really tell what was being reflected. --HiroDynoSlayer (talk) 10/19/2007 17:06 (EST)

He's a boy who goes to Molly's school in New York in the present. -- honoursociety

The Assignment Tracker Map lists Molly as now in India. This could be the "safe location" that Mohinder sent her to? Radicell 02:39, 2 November 2008 (EST)

The Shark is back with a question:

This is actually something that we can tell you is going to be on the DVD. There was a scene where Arthur found Molly and stole her ability, using it to find Hiro and Claire in the past. However, the scene just seemed overwhelmingly, what’s the word? Disturbing. - Mike the Man-child!

Does anyone actually remember Adair Tishler's Chinese intro (Previously on Heroes)? I think Milo may have been joking.

Does anyone think that the image included is a better one? I personally do. (also it shows her having a little bit of blond hair huh?) Post if you agree to the change! AJUTChronicles 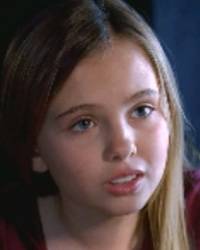