Sparrow Redhouse is an evolved human from Chandra's list with the ability to manipulate earth. After becoming a target of the government, she became a part of the Rebellion led by Micah Sanders.

By entering his sister Shanti's name as a password, Mohinder Suresh is able to unlock a list of evolved humans. Sparrow's name is included on that list.

Sparrow's name is listed in a list of contacts on Elle's cell phone.

A hooded Sparrow is among the prisoners to board Flight 195. She's in the same row as Hiro and Tracy at the far back of their row. During Peter's fight with the guards, her hood is never taken off her head and she is not disconnected from her drugs by Claire or Peter. When Peter Petrelli accidentally freezes a hole in the cargo plane in which Sparrow is held captive, the depressurization causes Sparrow, still strapped to her seat, to be sucked out of the plane.

Sparrow is mentioned in passing when Alex and West are joining up with Noah Bennet to avoid capture. West says, "What happened to Sparrow, Alex?" And Alex replies, "We sort-of got separated".

When Micah observes the list of captives on Flight 195, Sparrow is shown to be aboard the plane, and later is sucked out of it. 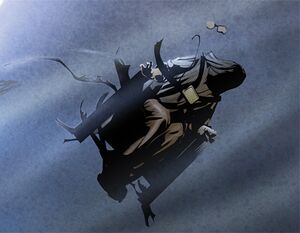 Sparrow is falling towards the earth.

The force of the fall from Flight 195 breaks Sparrow free of her seat and her drug restraints. She uses her power over earth to send dirt up to catch her and break her fall. She survives. Normally she has to be touching the ground for it to work, but she believes that the adrenaline from the fall allowed her to do that. Sparrow travels to a trailer park and steals clothes and there meets up with Micah Sanders who figured out where the plane crashed and used his powers to get a bus ticket there. They're both shocked that the plane has disappeared and Sparrow says she was captured in a city where her powers don't really work so well due to the asphalt. They're confronted by some of Danko's men, but Sparrow has Micah run, and she uses her power to flip over two Jeeps. The two are stopped by Flint Gordon, but instead of letting him help them, Danko's men shoot and kill him. Sparrow drops a massive mound of dirt of them and she and Micah escape again. She promises Micah that they will find his family and he decides to start gathering evolved humans to fight this new organization, beginning with contacting Claire.

In New York, Sparrow receives messages from Micah, telling her to help others like her. She takes a Nissan Cube to Micah's location and meets up with him and West. Micah informs them that Danko's team are after people all around the world and that a family in London is on their list. West and Sparrow go to London and Sparrow splits the ground apart in order to save Abigail. Abigail tells them about the other people upstairs and the trio rush to help. Upon arriving upstairs, Abigail spots Lee being attacked by an agent. Claude appears and stops Abigail from helping Lee. Sparrow and West take Abigail with them and West flies the girls back to Micah. Soon, Sparrow becomes part of Rebel.

Sparrow cuts the power within Building 26 and rushes off while the plan takes effect. Later, after West and Abigail rescue Nana and Damon, Sparrow arrives and takes the group away on a trail of dirt. They land safely on the ground and rush off to safety within the bushes.

Just as Eric Thompson is about to shoot Micah, Sparrow arrives at the scene with West and Abigail, and they proceed to use their abilities to thwart Thompson, Sparrow using hers to create a giant man-like structure from the ground, which punches Thompson through the floor. He eventually flees after Micah tells him he's on the country's top ten wanted lists.

Sparrow travels to India along with Micah, Abigail and West to find Molly. They all go to the Pittsburgh train station and Molly says that Monica, Lee and Claude are in a train that will take off in six minutes. They all run to the train only to find an agent is guarding the entrance. After West gets rid of him, Sparrow covers for the others so they can get to the train. This agent escorts Sparrow outside, who informs him he won't be hurt if he lets her go. He brushes it off, so Sparrow manipulates a mound of dirt to carry him away. Then, West picks up Sparrow, only to discover that the train is leaving. West flies the two of them after it, and they realize that something is wrong, otherwise Micah would've stopped the train by now. Sparrow tells West to drop her off in front off the train. She abruptly stops the train with her power.

Sparrow and West regroup with the others and Sparrow watches as Micah tries to find out where Monica is. When West points out the oncoming squad of government agents, Sparrow tells them not to worry. She raises her hands and creates a massive earthquake that stops the agents. She continues this process until all of the agents are defeated. After Claude leaves with Molly, West decides that he should make a few trips, in order to fly everyone to Monica. Sparrow says that it isn't necessary and creates a speeding path of earth that carries Micah, Abigail, Lee and herself, matching the speed of West's flight. They arrive in Washington and Micah begins to communicate with Sparrow from inside the hospital, giving her instructions to find Monica.

Sparrow leads the group and, under her leadership, they find Monica. A doctor is experimenting on her, so West knocks him out while Abigail frees Monica. Sparrow leads the team out of the hospital, where their mission to rescue Monica is finally completed.

In chapter 5 of Faction Zero, Sparrow and the rest of Rebel watch Micah as he uses his computer to locate Eric Thompson, Jr. with traffic cameras. When he finds him, they go to his location, only to find several vans, one of which is covered in blood. They decide that Thompson might have faked his death, and will keep an eye out for his return.

Sparrow Redhouse is an evolved human with the ability to manipulate earth. With this power, Sparrow has shown that she is able to split the earth, raise it and also manipulate it to create moving paths on which she can travel.

Please refer to Theory:Sparrow Redhouse for fan-created theories and other speculation.