From Heroes Wiki
(Redirected from The Caged Bird, Part 2)
Jump to navigation Jump to search 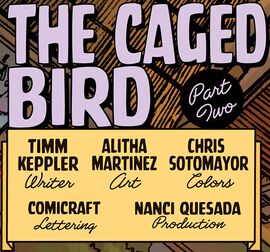 In the Millbrooks' home, Thompson tries to convince Daphne to come with him. However, his attempts are not working and things start to get heated. Mr. Millbrook, realizing that the situation is getting bad, tells Thompson that he would like to talk with his daughter alone and that he will see him in the morning. Once Thompson has left, Daphne and her father get into an argument, which end with Daphne telling her father that she wishes that he was the one that died. In the morning, Daphne leaves her home, with Mr. Millbrook is left standing on the porch.

During the three months that have passed since Daphne left home, she has been to many places. These places include Giza, Rome, the Taj Mahal, Peru, and the Great Wall of China. Daphne finally ends up in Paris, where she finds a hotel and calls her father. Her father asks her to come back, but she refuses.

When Daphne initially arrives at Paris, she has no money and no place to stay. Eventually Daphne ends up sleeping among the homeless. She tries to get a job with a florist, but was refused. Daphne soon resorts to stealing in order to eat.

Two weeks later, Daphne comes into contact with Samir Mellouk. After talking for awhile, Samir offers Daphne a job stealing for him and an apartment where she can stay. However, this does not last.