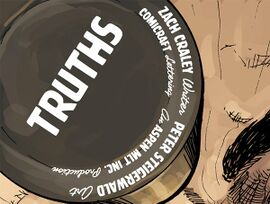 With a bullet inches from his head, Arthur Petrelli ponders that when you are about to die, your life does not flash before your eyes – instead your mind wanders for a moment, allowing you to repent, reflect or regret; and as Sylar stops the bullet and asks if Arthur is really his father, his moment has been extended.

Arthur muses that both times he has "died", the Haitian has been present. He recalls the major events and people in his life: his army service, his marriage to Angela, the birth of one of their sons, their dog Izzie, the soup Angela poisoned him with, and a hunting trip at Pinehearst with Nathan and Peter; and wonders where he went wrong and diverted from the path. Whenever that was, he thinks, everything he did was done for his family.

When they return home from the hunting trip, Angela asks Arthur how the trip went, and he replies that it went as could be expected. She tells him to have patience with Peter, and that he will be a great man when his powers manifest. Arthur is disappointed that the genetic markers for abilities are in the wrong son, and they discuss flying Dr. Zimmerman in to inject Nathan with the formula for synthetic abilities. Arthur recalls the events of the hunting trip which had disappointed him: Peter is holding a rifle with a deer in his sights. Arthur tells him to take the shot, but he begins to cry. Nathan grabs the gun, saying he'll do it, and shoots the deer as Peter cries out "No!".

Seeing himself in place of the deer, Arthur thinks that Peter has proven him wrong, and that he is now strong enough to shoot even his own father. Sylar releases the bullet, which hits Arthur square in the forehead. As he lies dying, his last thoughts are that of pride that both his sons are strong enough to do what must be done.