From Heroes Wiki
(Redirected from The Caged Bird, Part 1)
Jump to navigation Jump to search 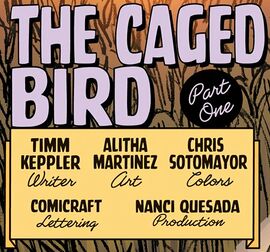 While Daphne is sitting outside her home, she reminisces on the events of her life, from when she was a child to the day of the first eclipse.

25 years ago, Daphne is walking in the cornfield with her mother, carrying the medal her mother won in high school. Daphne dreams of becoming a runner like her mother, but when she was three years old, she is struck by an illness and she becomes dependent on crutches to move around.

24 years later, Daphne's mother tries to, once again, convince her that there is still a chance that she can walk unassisted again; Daphne refuses to listen to her. Her mother eventually stops trying when she is told that she has cancer and that she only has a few weeks left to live.

During that time, Daphne did not make things easy for mother. On the day that her mother dies, Daphne gets into an argument with her, which ends with her father telling her to go to her room. Later on, her mother dies in her father's arms, while Daphne stands outside the doorway.

On October 1st, the funeral for Daphne's mother is held. While people are offering Daphne their condolences, the eclipse starts to happen. Daphne, frustrated by the people around her, gets up to leave. A guest tells her that her mother is now with the angels, and another guest tries to comfort her, but Daphne tells them that she is fine. Daphne's father sees what happening and tells her that "they were just trying to help". Daphne responses by saying, "I don't want help -- I wanna be left alone." She then walks off using her crutches. Her father tells her to come back but she doesn't listen. Meanwhile, the eclipse becomes fully engaged.

A few feet away from the house, Daphne falls to the ground. She recalls all the things that she wanted to do but isn't capable of due to her illness. Suddenly, she hears someone calling out her name. When she looks up, she is shocked to see her mother standing beside her. Her mother tells her that she needs to stop thinking that she won't amount to anything. Daphne tells her mother that she was crippled and she can never be what her mother was, but her mother contradicts her by saying that she is special. Daphne then responds by saying that she is not. Her mother goes on to tell her not to let the braces hold her back, and that she should stand up and leave this cage. Daphne listens to her mother and stands, only to realize that she doesn't need her crutches anymore. Once this realization sinks in, Daphne runs off. While Daphne is running, a man watches her from the window.

Four hours later, Daphne returns home. Her father asks her where she has been and states that he can't lose her too. Daphne tells him to turn around. When he does turn around to see her, he sees that his daughter is able to stand without the aid of her crutches and goes to hug her. Daphne asks if he is going to say anything and he responds by saying he wished her mother was around to see this. They are soon interrupted by a knock on the door, and her father goes to answer it. The man at the door tells Mr. Millbrook that he was at the funeral earlier and that he is sorry that Mrs. Millbrook died. He then goes on to tell Mr. Millbrook that his name is Thompson and that he wants to talk about Daphne.