From Heroes Wiki
(Redirected from Under the Bridge, Part 1)
Jump to navigation Jump to search 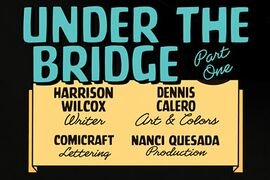 Outside Memphis, Tennessee, a prison transport bus carries Perrin Crocker, a man convicted of murdering his wife. During the trip, he is thinking about who actually murdered her, since there was no murder weapon found. Still, the blood was on his hands according to the jury. He meets Steve Gustavson, who angers him about his wife's murder. A raging Perrin then protrudes spikes from his body, killing everyone on the bus and causing it to crash, while realizing what killed his wife. The next day, Donald Essex, a guard on the transport bus (who was also wondering about his own life), is in the Memphis General Hospital, under observation without a scratch on him. Nathan Petrelli arrives, wanting to talk to him about his situation.