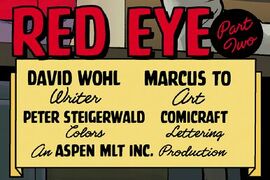 During the night in Ithaca, NY, Anna goes to the campus bookstore where she goes to school and purchases some textbooks. While paying, she tells the clerk that she is living in town now and will see him around. Upon exiting back onto the campus grounds, Anna recalls that she came here to stop running and begin a new life on her own, and that now she is a waitress at the Blue Dolphin Diner working the overnight shift. Anna walks by a Nissan Versa and continues walking thinking on how she has heard that Primatech is supposed to be gone, but she worries that Ricardo is likely still searching for her. Suddenly, Anna is startled when she runs into a girl that is asking directions to a lecture hall where the college is holding an open house. After calming herself down, Anna gives the girl the directions, and they introduce themselves to each other. Anna explains that she goes to school during the night. The girl says her name is Claire, and explains she is in town with her grandmother to look at colleges, but she isn't sure if she even wants to go.

Just then, Claire is forced to stop talking when a security guard grabs her around the neck with one arm and another guard shoots her three times in the stomach using a gun. In response, Anna uses her ability on the guards to stop their attack on Claire. Ricardo then approaches Anna and explains he had used his ability on the guards and was just trying to protect Anna since Claire was listed in the Primatech files he had seen. Anna shouts for help for Claire, but before someone else arrives, Claire regenerates her wounds and gets up. The guards also come to, having only their short-term memories erased, and leave once ascertaining that everything is okay. Ricardo asks Anna to accompany him somewhere so they can talk in private, but she says she wants nothing to do with him because of what he has done and forced her to do. However, Claire convinces Anna to hear Ricardo out by telling her that she knows how it is rare to find someone who will go to such lengths to protect you. Anna then invites them both to share dinner with her, and tells them that the dinner is on her.