He's back. He said so himself at Collectormania. Micah's back also, obviously. They have no idea what's gonna be in season three, though, since they haven't had the scripts. All they know is that they are back for the early episodes. Of which there are 24. --DocM 12:50, 8 March 2008 (EST)

Inside the writers' room 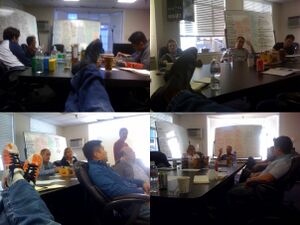 Here's a couple of pictures from inside the writers' room. It'd be interesting to know what's on those boards! -- RyanGibsonStewart (talk) 21:58, 9 March 2008 (EDT)

Would it be possible to move the theories on this page, so they have their own seperate page? --Thetobiasempire 20:17, 18 April 2008 (EDT)

Odd, but Jesse Alexander just updated his Facebook status with "Jesse Alexander is gonna still be breaking 7 tomorrow. PARKMAN!!!!!". Does this mean that Matt or Maury will be in episode seven? Only time will tell. --DocM 21:09, 6 May 2008 (EDT)

In the latest trailer for the preview of Heroes, we see a man in black coat and a cap leaving the Odessa Police Department. And it's future Peter. Chrisyu357 06:19, 15 May 2008 (EDT)

I think he just meant Claire being Angela's granddaughter as the third child. It's probably just the internet exploding into theories. Then again, being a Lost fan, I'm a freak for theories no matter how bad they sound, so maybe Adrian really did screw up and Hiro is the bastardization of her and Kaito's relationship or Matt is from her and Maury. Angela is the Heroes bicycle, it seems. :P --NellaBishop 19:53, 28 May 2008 (EDT)

Just got an email from heroestelevision.com with a bunch of new spoilers, but didn't know whether any had been added already... it says the last date spoilers were added is 28/5 so I'm guessing at least a few of them on the page are new... check them out here to see if there's any that haven't already been added. (Friskymuffin - (talk) 05:37, 2 June 2008 (EDT))

... if the second adopted character turns out to be Peter, just so that they can have him hook up with Claire, I will be very, very disappointed with the show. Let the speculation begin. (Guilty pleasure: glancing at spoilers.)--Riddler 23:03, 23 June 2008 (EDT)

More than meets the eye? "Scale" back? Anyone else remembering Chandra's Mohinder the lizard? Think he has dynamic camouflage? ---Action Figure 17:39, 8 July 2008 (EDT)

"6/10 — N'Tare Mwine has joined the cast as an Aboriginal story teller named Usutu. Usutu will appear in episodes 3 and 4. This will not be the first time he has worked with Heroes. N'Tare Mwine was originally to play the terrorist Joseph Al Amir in the unaired pilot."

"7/11 — Hollywood Reporter claims that Ntare Mwine (Blood Diamond) will play an African who is artistic and close to many of the original heroes. His special abilities will be developed throughout his nine-episode arc. According to IMDb.com, Mwine's character will be named "Usutu", and will first appear in the third episode."

If the consensus is the Comi-con spoilers have too much spoilage, maybe we should have a special page in the spoiler namespace for them (e.g. Spoiler:Comi-con)? I haven't checked them out yet, myself. I'm waiting to see tomorrow's webisode first, cause I know that webisode is one of the things comi-con viewers got to see. If you do make the page, please remember to put something generic and non-spoiler in the summary tag so those of us that check the recentchanges aren't spoiled by the content of the article.--MiamiVolts (talk) 13:12, 27 July 2008 (EDT)

Can someone who has been around longer than me explain to me the difference between these two spoiler page and why we need them both. I don't think I get it... Pierre 19:01, 31 July 2008 (EDT)

Pictures from the set and fresh spoiler video

From my bud Mr. ODI: Video of Peter falling off a building and BTS pics of Elle and Noah...and some dude. Somebody else can post this stuff on the main spoiler page, and/or upload images if they'd like. Thanks! -- RyanGibsonStewart (talk) 11:39, 9 August 2008 (EDT)

Um.. The second episode is apparently called "The Butterfly Effect".

Can anyone change it? I'll also add the blurb for that.

The last two "Fan Thoeries" are actually spoilers that were shown and told about in the first episode of Season 3 that was shown at Comic-Con. Can anyone tell me whether I should delete them.--Iceman 08:52, 14 August 2008 (EDT)

On that ODI site, the sound for the videos never works. Does anyone else have this problem? Watchmaker 11:41, 14 August 2008 (EDT)

Did anyone else notice what looked like Future Peter using Illusion to look like Present Peter? Obviously with knowing that Future Peter poses as Present Peter you would figure that he couldn't be walking around with the scar without people noticing it.--Iceman 09:39, 28 August 2008 (EDT)

Is there any evidence that the Untold Stories will, or will not, be in season 3? Some of them have already began to show up here as spoilers, they probably shouldn't, unless there is evidence that they are going to be used in season 3. -Lөvөl 17:06, 3 September 2008 (EDT)

When watching the video linked in that spoiler, all I see is a bald man smiling with blue flames, while looking at Peter.

From the Episode 3.02 description, we learn of the actors starring in that episode.

The first actor seems to resemble extremely well, the "I'm Peter Petrelli!" guy in Level 5, while Blake Shields is literally confirmed to be the pyro-guy.

So, unless there's a part of the video I missed where we see David H. Lawrence XVII, then I think the spoiler is wrongly "confirming" a good look at the villain pretending to be Peter, when it is clearly another villain using fire.

Ok I am coming clean, I've been starting early this year on the old interviews, and so far so good. Erik Betts, Jamie Hector and Robert Forster have all said yes! --Skywalkerrbf 13:24, 22 September 2008 (EDT)

Someone will be back

According to IMDB, Chad Faust will play a character named Scott in upcoming episodes, he should be added. Intuitive Empath - Talk - Contributions 10:03, 25 November 2008 (EST)

Yay, Monica's back!!! Double yay, Claude might be back!!!!! Death of character introduced in season two: Maya or West, and I don't think West's coming back. The "mother of all deaths"? Claire, Hiro, Peter or HRG, only this time permanent. Mohinder and Tracy trying to crack another formula?!?! WHY?!?! Intuitive Empath - Talk - Contributions 18:35, 29 December 2008 (EST)

FINALLY!!! Flashback on Company founder (at least one of them), and WOW, Angela has (or had) a younger sister??? I'm really excited about this episode. Intuitive Empath - Talk - Contributions 11:42, 16 January 2009 (EST)

Just check out this website it has some nice and interesting photo spoilers:http://www.heroesfanatic.com/ --Manwithnoname 12:30, 25 January 2009 (EST)

I saw somewhere on the site that baby Matt might be able to "activate powers", and it got me thinking. What if the Catalyst HAS to exist. When Arthur died, someone else had it transferred into them. Now, I don't want to argue specifics about how baby Matt ended up with it, but really, it does seem feasible. Angielynne - talk dirty to me... 12:58, 20 March 2009 (EDT)

I know it says that Mr. Kapoor will be in the episode 1961 but do we know that he will be playing a young Chandra? It definitely seems plausible but is it true or just speculative? --Peter 20:18, 23 March 2009 (EDT)

I think it's time we had a policy on what goes on this page. Many spoiler sites are using this to advertise their site rather than represent facts, which is the purpose of a wiki. I propose that we start by setting the following rules.

Feel free to add to this list, or debate the presence of some things already on it. I'd really like to see a proper format used in editing this page compared to what has been popping up as of late. Thankyou. -- Tristan0709 talk 06:56, 5 May 2009 (EDT)