Emma's ability is similar to Sound absorption (hearing impaired), but more like Echolocation with sight (Extrasensory perception?) -- Mike the Man-child!

If she was deaf she wouldn't be listen to music on a portable. 50000JH

Ability: Sound Visualization. Simple enough, eh? Short, sweet, defines it without missing anything. The colors can be noted on the page.

On a discussion note, my friend and I got chills when she began playing the cello(?). It was such a cool concept and it was executed beautifully. It'd be a shitty power if she had hearing though. Probably would be quite annoying.--Riddler 01:00, 29 September 2009 (EDT)

Under the episode description for Emma, shouldn't it mention that Peter witnesses her playing the cello, and that he followed her when she fled the scene?

She's not deaf, I've gathered that much from the scene with th doctor, but can't she also speak, didn't she shout at the doctor saying she didn't want to see their faces? Or does she use a hearing aid which is in the summary. Or is that just how she likes things? Quiet? --Fr0z3nB0nes 17:44, 29 September 2009 (EDT)

Mind if we use deaf?

Does anyone mind if we say she's deaf? Deafness is referred to as a hearing impairment by the hearing but people that are part of Deaf Culture like to use the terms deaf and hard of hearing. And clearly she is not hard of hearing. --Rudeboy37 23:42, 29 September 2009 (EDT)

Speculation about her deafness.

With a character like this, there is bound to be tons of unintentional speculation. As a note, we have no idea if she was born deaf or became deaf over time/due to some accident. She spoke clearly without the muffled sound you usually hear when deaf people speak, which could indicate that she became deaf later in time. That in itself is speculation, but it's good to keep it in mind. On her page, someone wrote "She followed the colors, which allowed her to play beautiful music, even though she never learned how." This is speculation for a few reasons that intertwine. If she wasn't born deaf, it's quite possible that she knew how to play an instrument before she went deaf, and put it down when she did become deaf because she couldn't hear it. When she started seeing the colors, it's also possible that she played how she remembered and used the colors as a guide, or was simply fascinated by the colors. Again, this is all speculation, but the opposite of this, thinking she's born deaf, didn't know what she was playing, or never learned how, is all speculation as well, even if unintended. I'm not sure if what I said makes any sense, but that's all I can think of right now.--Riddler 03:38, 30 September 2009 (EDT)

Synesthesia doesn't do that!

So she smashed a hole in the drywall. That's not synesthesia. Is it sound manipulation? Are we gonna have another Knox-level fight over whether this is an existing power or a new one? Please tell me somebody has a plan.--Uncanny474 21:12, 12 October 2009 (EDT)

Her enhanced sythesasia is obviously a real ability as Peter was able to replicate it.--WarGrowlmon18 13:58, 13 October 2009 (EDT) 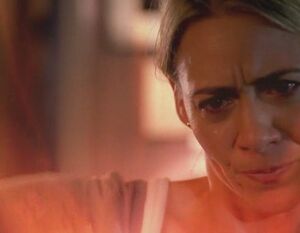 Did anyone else notice that the Cello was in a big blue box, VERY similar to the one Edgar was pushing away from the table at the carnie's breakfast? Methinks the Carnival is putting their fingers into many, many pies. PowerSink

Anyone knows what the song is Emma played twice in the series? -- (WaterRatj)

Is Emma a recurring character now? She has appeared in three episodes.

Is Emma The Pied Piper?

I've noticed in both episodes where she played an instrument, people gathered around her and appeared to be in a hazy state...almost like they're completely relaxed and drawn to the sound. This happens during her cello-playing session in the park and when she played the piano in the hospital. Maybe her ability to make beautiful music that attracts or lures people. --DangerJim 10:51, 20 October 2009 (EDT)

Hang on a second, Emma did graduate from medical school, we saw her degree, how come she says she dropped out? Was she lying? Intuitive Empath - Talk - Contributions 14:14, 10 November 2009 (EST)

I guess that Emma is the key character of this season. I feel that her ability is the one Samuel needs to reach the maximum power he could have, in order to achieve his twisted goals. Anyone had that feeling? --Egyptian 18:02, 1 December 2009 (EST)

So she expects Peter to believe that she drew him halfway across the city to her apartment by playing a damn cello, yet she refuses to believe that Peter dreamt a future where she caused serious trouble with the very same cello. Seems pretty one-sided to me.--PJDEP - Need further explanation? 22:44, 11 January 2010 (EST)

Let's just assume that there's going to be a next season for now. Where do we see Emma's story going? Is she going to become part of the main cast, or is she going to get relegated to GNs the way some people have been? I can't see them just dropping the character, she's too well-liked. And she's been tied into Peter's storyline really deeply, and I have a feeling they might take the opportunity to advance that relationship. --Clairesxtwin48 00:19, 15 February 2010 (EST)

Is there a reason that this is in the notes section and not the other relatives section of her infobox?--PJDEP - Talk - Polls and Opinions 23:59, 2 March 2010 (EST)

Do you think that Samuel has something to do with her denial. He could easily manipulate the ink on the page, and it seems the kind of thing he'd do to make her come to the carnival. --mc_hammark 16:08, 7 March 2010 (EST)