He didn't escape, though. Just prior to the grid's failure, Elle lets him out. Therequiembellishere 22:23, 5 October 2008 (EDT)

Is it really right to say that Danny Pine, Echo DeMille, and Noah Bennet are escapees? I mean they didn't really esacpe, they were let go. Not to mention Echo and Danny never technically escaped, they died while still at Primatech. Setlik0 3:04, 16 December 2008 (EDT)

Can we assume that everyone held at Level Five escaped? If so, can we assume Echo escaped as well? Therequiembellishere 22:29, 5 October 2008 (EDT)

I noticed some unfamiliar faces among the photos of the escapees that Sandra and Meredith looked through. At least three, two male and one female is visable. One of the male ones appears very clear, but other two is only quickly seen. Anyone got any ideas as to their identity? Pierre 16:48, 18 October 2008 (EDT) 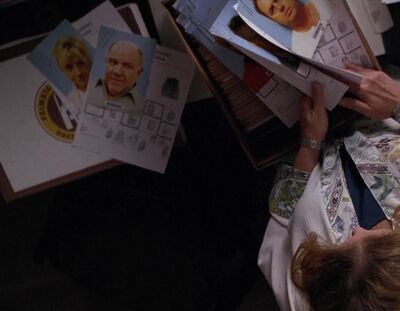 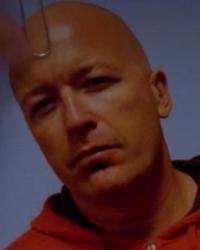 The best shot that there is on the woman is seen in the far right of the left pic above (partly covered by the photo of Maury).
There is supposed to be 12 escaped villains (right?).
7 have been confirmed and introduced to the show: Canfield, Doyle, Flint, The German, Jesse, Maury and Knox.
1 has been spoiled about
1 have been confirmed by the writers: Echo
That would leave 3 yet unknown - the three seen on the pics? Assuming Howard Grigsby is still alive and held, the guy in the white shirt as seen above could be him--Pierre 13:34, 19 October 2008 (EDT).

“In ‘Angels and Monsters,’ Sandra and Meredith were going through some of Noah's files that included Doyle, Maury, and other Level 5 escapees. However, there were three additional files of a bald man with a red hoodie, a heavy set man with a white shirt, and a blond woman that were never seen again this volume. Were these characters reintroduced to us in another episode/graphic novel/Heroes Evolution content? If not, is there any plans to reintroduce these characters in the future?”

There were plans to introduce them in heroes evolution content and webisodes, but that did not happen. So – you may yet meet these awesome characters that we’ve created with powers that will blow your mind. But not today.

Since the image on the page is a promotional image, and technically a spoiler, should we change the lead image? I'm thinking an image from the actual escape, like Knox telling "Jesse" that they have to leave. Similar to Image:Eric Doyle waddles away from Level 5.jpg, but with more people in the shot.--Riddler 15:37, 19 October 2008 (EDT)

First, is Noah really a 'known member' of the Level 5 escapees? Elle let him out to help with Sylar. Yes, he ran home after that to see his family, but then shortly afterwards returned to the Company on his own accord and rather than locking him back up, Angela returned him to active duty to help bring in the people that'd escaped. Secondly, I disagree with Grigsby and Echo being listed as 'known members'. We know no such thing. Yes, the last time we saw them they were being taken to Level 5. And as far as we know, everybody that'd been held in Level 5 escaped. But to me that would make them 'suspected' members, not known until we see them on the loose. Yes, I know an interview confirmed Echo as one of the escapees, so taking that (non-canon) reference into account he might have a stronger case. But I still haven't found a single reference to Grigsby being an escapee, so that seems to be a speculative theory, not a known fact. Remember, Grigsby was captured almost 5 years before the Level 5'ers escaped, so a lot could've happened in the interim that could mean he was no longer present at that time. --Maelwys 10:06, 4 November 2008 (EST)

We have a conflict.

Flint's assignment tracker explicitly says that there are twelve escapees. I originally took "a dozen" as non-literal, to emphasize that there are alot, but this AT changes things. We have 13 known escapees already, and one other from the promotional picture. Umm....yeah.--Riddler 15:08, 18 November 2008 (EST)

I guess we might have to redefine what we "know". Based on the show, we have 6 confirmed escapees (Stephen Canfield, Eric Doyle, Flint Gordon, The German, Jesse Murphy, Benjamin "Knox" Washington). Based on the graphic novels, we can add 4 more names to that (Dennis, Michael Fitzgerald, Danny Pine, Tina Ramierez), which puts us at 10. Of the remaining (Echo DeMille, Howard Grigsby, Maury Parkman, spoiler person), we've heard from the producers that Echo and Grigsby were probably escapees, but that's unconfirmed from within canon thus far. We can expect that the 'spoiler person' is one of the escapees, as there are several upcoming episodes dealing with him. Maury would seem to be likely one of them as well (we know he was locked up before the breakout, and that he isn't since), but it's been alluded that he might've actually escaped prior to that (Nathan was seeing Linderman before then). So counting the 10 'known' people, and the 1 spoiler person is 11 escapees. Discounting Maury as having escaped earlier than that, would leave one spot for either Echo or Grigsby. Or, one or more of the trio Sylar catches weren't Level 5 prisoners. --Maelwys 15:33, 18 November 2008 (EST)

At which point was Danny Pine put into Level 5? I don't recall it saying that in the graphic novel (which I just re-read) or in Villains. -- FlamingTomDude 2:13, 19 November 2008 (EST)

Did Ricardo Silva escape Level 5? I know he was kept there, but I didn't know he escaped. (I have a hard time keeping up with the iStory content.) If there's no mention of him escaping when Elle blew the grids, he should be removed from the page. -- RyanGibsonStewart (talk) 16:13, 23 November 2008 (EST)

THEY ARE ALL DEAD

Actually, I believe Sylar personifies death much more than the escapees, who are indeed all dead. Therequiembellishere 14:52, 16 December 2008 (EST)

Hey, Samedi, Grigsby, Michael, Tina aren't dead ( i guess where Michael and Tina were since they were recaptured ) and Canfield, Doyle and Flint are presumed deceased. User: Jethap

+And why didnt Tina Michael or Grigsby appear in Dual?

Echo as an escapee?

Have I missed something, or is Echo still unconfirmed as an escapee?

We know that he was captured, and presume that he was placed in Level 5. However, the next time we see him is in Dual when Bennett releases him from a cell. Since we never actually saw him either escape or be recaptured, it seems to be pure conjecture to refer to him as an 'escapee'. He was just a prisoner there, that for some reason never managed to escape (maybe he was still strapped into his funny chair at the time, so couldn't run away even with the doors open). --Maelwys 09:42, 17 December 2008 (EST)

Should we add Sylar to the group because he has escaped from level 5 on many occasions ?