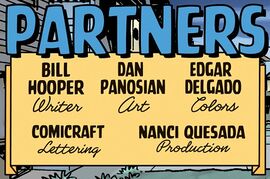 At the Company, Noah and Meredith watch as Mark Spatney is being hosed down after being freed from his cocoon. Noah notes that the Haitian will have to deal with them. Then, Noah's phone rings, and he tells Meredith that the two of them are going to visit an old friend.

They go to Mrs. Pine's home, where Danny Pine has appeared to visit his ex-wife and son. Noah tells Meredith to go in around the back, and Noah will enter from the front.

A few minutes later, Meredith enters, her hand lit up, and finds Noah holding Pine's son. Meredith tells Noah to leave William alone, but Noah brushes her off and tells Danny to turn himself in. Danny tells Noah about all the bad things the Company did to him, and Noah asks Meredith for some help. Meredith quickly fashions a Molotov cocktail out of a bottle of alcohol, a rag and her own flames, then throws it at Danny. Danny smashes it with his metallic hand, and smashes a water pipe, resulting in water going everywhere, including on Meredith.

With Danny holding her, Meredith asks Noah to let him and William go, and not to tear another family apart like he did to her. Noah is surprised that she wants to talk about Claire now, and Meredith asks him to think about what he did. Noah is adamant that he did the right thing. He shoots Danny's arm, and Danny lets Meredith go. While recapturing Danny, Noah tells Meredith that he gave Claire a stable home and a loving family.

As they are leaving, Meredith walks into the next room, shocked to find Mrs. Pine lying on the floor, dead. She asks Pine about it, and he said that he didn't mean to kill her, but she had stolen his money, cheated on him, and taken her son.

Noah tells Meredith that William is going to go to a good home, and have a caring family. Meredith admits that Noah did the right thing, but that Meredith should have been given the choice.

On the way back to the Company, Meredith tells Noah that she guesses their partnership is over, and he agrees.