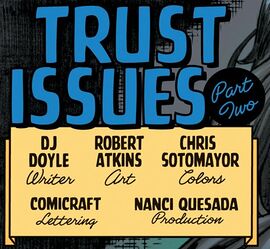 Thompson, Jr. takes Donna to see Noah Bennet and informs her Noah killed his father. Later, Evsdropr phones Donna and tries to keep her focused on taking down the Company, but Donna throws her cell phone away. Donna is assigned to internal affairs at the Company and investigates Leonard Cushing's murder. She finds her cell phone and a brown paper bag on her desk. The bag appears to be from Evsdropr and contains a bullet in a sealed plastic bag Donna thinks may be the missing bullet that killed Cushing. Donna has the bullet tested and finds out that it matches Cushing's blood and unique acid signature, and that it was shot by Thompson, Jr.'s gun. Donna confronts Thompson, Jr. with the evidence. Thompson, Jr. then pulls out his own bagged bullet and explains to Donna how Evsdropr tricked him and two other agents into murder, and he gets Donna placed back on active duty as his partner. Later, Donna calls Evsdropr and says that she's handling things her own way now.