First Lady Tracy Petrelli is a version of Exposed Future Tracy Strauss in The World Entire universe. She is a Special, a former political aide, and former First Lady of the United States of America. 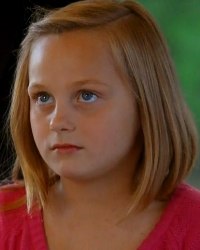 Tracy arrives at Primatech and is happy to see Noah Gray alive and well. Elle seems to find Tracy's reason of visiting faulty and Tracy admits that she is here for Peter Petrelli, stating that they already have the Peter of their time and that the other one is wanted for attempted murder. The Primatech agents are angry, stating that the Pinehearst agents are all killers. Elle throws some lightning at Tracy who calmly freezes the bolt. She then proceeds to freeze Gabriel but quickly apologizes and reveals that the end of the world is coming. She also reveals that she hopes to stop it in order for her children to grow up in a peaceful world.

Tracy then goes to visit Micah Sanders at MIT. She enjoys this visit and the two quickly catch up. Micah blurts out "Mom" when talking to Tracy, who understands and says that she "looks like her and sounds like her." Tracy then attempts to shut down Micah's admiration of vigilante St. Joan and says she has to leave. Tracy then gives Micah a hug and comments on how tall he is getting. Meanwhile, Tracy's sister, Barbara Zimmerman impersonates Tracy and attacks Peter. Mohinder Suresh then has Molly Walker locate the real Tracy, revealing that she is in fact in Annapolis, Maryland.

It is revealed that in 1982, Tracy was taken to the Company and injected with the Formula, giving her an ability.

In the Oval Office, Tracy comments on how Nathan is grouchy. He tells her that his father has assembled an army and may be planning to forcefully inject the remaining population with abilities. Tracy says that that will be hard seeing as there is only a few thousand evolution shots left. Marty then enters and tells both Nathan and Tracy that "Sylar" is back. Tracy then stands beside Nathan as he addresses the country on the recent ability caused catastrophes.

After the Ability Loss Epidemic, Tracy holds a frightened Andrew in her arms. Suddenly, Peter teleports into the room, freezes time and injects Tracy, Nathan, Andrew and Agent Landers with the formula, effectively restoring their abilities. Later, Tracy appoints herself liaison of the Company to the president. Nathan agrees to this.

Tracy remains at Nathan's side as he addresses several of The Company's directors. She later accompanies him to visit Peter's newborn daughter. While on the plane, Tracy, Andrew and Nathan witness Odessa, TX explode and the blast damages the plane. Nathan has Mohinder rip a hole out of the plane and Nathan immediately grabs Tracy and Andrew and flies them to safety. Tracy watches on as Nathan returns to the plane and subsequently dies in another explosion.

Tracy later calls Meredith Gordon and promotes her before informing Liam Samuels, Nathan's replacement, of the Company and its dealings.

Tracy has the ability to dramatically lower the temperature of objects, freezing them, called cryokinesis. She uses her ability to nullify an electrical attack by Elle and to freeze Gabriel solid in a moment of anger. She briefly lost her ability during the Ability Loss Epidemic, but Peter returned it, and she demonstrated again by freezing the wall.