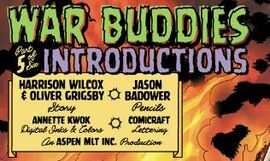 In the Pentagon, Hana Gitelman continues to read the Lonestar File.

As Austin kicks him to the ground, Dallas manages to shoot Au Co, carrying out their mission. Austin tries to reach her in time to heal her, but Dallas holds him back, and the girl dies.

At a base, Dallas and Austin file their report, but Austin refuses to corroborate Dallas's fantastic claims about Austin's and Au Co's special abilities. Frustrated, Dallas punches Austin.

Later, after being discharged from the military for his wild claims, Dallas sits at home with his wife and infant son. Austin arrives, and apologizes, saying that "great men are willing to make a sacrifice to save the world". The two men introduce themselves using their real names: Austin is "Linderman", and Dallas is "Petrelli".