Claire and Mr. Bennet's reunion is cut short by Peter who has reached a dangerous instability after absorbing Ted's ability. Peter tells Claire to be prepared for what she must do to stop him, but just as Claire draws the gun from her bag, Peter gains control over his new ability and prevents himself from exploding.

As a dejected Hiro mourns his own lack of conviction and his broken sword, Ando continues to try and restore Hiro's spirits. Ando searches the Yellow Pages for a repairman for the sword. Hiro teases Ando about who he expects to find to mend a centuries-old relic, but Ando chances upon a sword-smith advertising with the symbol. With new-found hope, the pair set off across the city to the shop of the mysterious sword-smith.

Back on the street, Mr. Bennet and Claire finally get a chance to catch up. Mr. Bennet is surprised to discover the relationship between Peter and Claire. As Peter convinces Ted that the two of them need to leave New York City before either causes the explosion, Mr. Bennet and Matt Parkman continue their search for the tracking system. Claire, believing that it may be her destiny, decides to accompany Peter and Ted. Around the corner, however, is an unexpected eavesdropper with superhuman hearing: Sylar, who learns of both Peter's plans to leave the city and Ted's status as a fugitive, and sees an opportunity to further his own agenda.

As Nathan worries about his trailing poll numbers, he also struggles with what he is being asked to do by Linderman. Linderman reveals to Nathan that Nathan's father was "one of us" who gave up. Linderman attempts to consolidate Nathan's conviction by imparting a surprising gift: he heals Heidi and cures her lower limb paralysis. 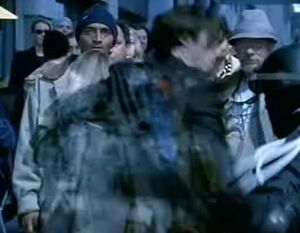 Peter and Claire run from the FBI.

As Peter, Ted and Claire walk the streets of New York on their way out of the city, Peter hears Sylar's thought, and realizes that that they are being tailed and that Sylar has learned of Ted's powers. But before they can formulate a plan on what to do, FBI agents, led by Audrey Hanson, arrive on the scene and arrest Ted. Peter grabs Claire and makes them both disappear. Audrey thanks Sylar, who poses as Isaac Mendez, for the tip about Ted.

As Hiro and Ando race across the city, Ando notices everyone is voting and Hiro sees Nathan leave a polling place. Hiro tells Nathan that in the future, Nathan is a villain. Hiro, convinced that the present Nathan is still a good man, tries to tell Nathan that he must help them try stop the bomb. Nathan disappoints Hiro by telling him that no one can stop the bomb. Hiro realizes that Nathan is already on his dark path.

Resilient, Hiro and Ando continue to Jittetsu Arms, the shop of the sword-smith. There they meet Mr. Claremont, who is amazed by Hiro's possession of the centuries-old Kensei sword. Hiro asks if the sword can be repaired, and the repairman replies that it depends on the decision of a third party who is also in the shop: Hiro's father, Kaito Nakamura, who steps out from the backroom of the shop. Kaito asks for a private word with his son, but Ando is wary that Kaito may be trying to convince Hiro to return home to Japan. Hiro tells Ando that he must hear what his father has to say out of respect, but Ando is unconvinced.

In the Company's Kirby Plaza facility, Candice still holds Micah prisoner. When Candice gives Micah some comics, including a scarce copy of Silver Surfer #1, he admits she seems like a nice person. Micah asks why Candice doesn't use her powers to become a hero, but a jaded Candice dismisses Micah's youthful innocence. Mr. Linderman arrives and asks for Micah's help. He tells Micah he will ensure that Micah's family will be able to live happily ever after if Micah will help him "talk to machines".

Back in the repair shop backroom, Hiro goes on to learn that his father had known of his powers all along, but had never been convinced that Hiro would have the right spirit to wield his abilities. Having observed Hiro's progress, Kaito is now convinced that Hiro is of true Nakamura descent. Hiro reveals to his father that he may be wrong about him, recounting his failure to kill Sylar when he had the opportunity. But Kaito is not so easily disappointed, and reveals himself to be a master swordsman. He tells Hiro that he will teach him the ways of the sword, and surprisingly turns Hiro into an able swordsman in only a short time. 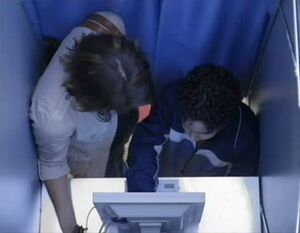 Back amidst the frenzy of election day, Candice takes Micah to a polling place. She disguises herself as a voter and introduces Micah to a poll worker as her son. In the voting booth, she asks Micah to alter the votes electronically to give Nathan Petrelli a landslide victory. Micah completes his tasks and, exhausted, asks if he can finally go home.

D.L. and Jessica track down Nathan in his office. Jessica confronts Nathan about not killing Linderman when he had the chance. The pair tells Nathan that Linderman will only seek to use Nathan as a puppet, and offer to kill Linderman when Nathan couldn't. Nathan eventually agrees to tell them where Linderman is, so long as they make sure that they finish the job.

Mohinder checks to see how Molly Walker is doing. She reveals that her power is now back. She uses it to detect that her other hero, Matt, is now in the building.

In the midst of their kendo training, Kaito reminds Hiro of the sacrifice Takezo Kensei made to be a hero. Hiro acknowledges that his father used to read him the story of "Kensei and the Dragon" every night before bed. Hiro realizes that he must have the inner strength to face evil head on and make the ultimate sacrifice to save his loved ones. His father encourages his progression further. 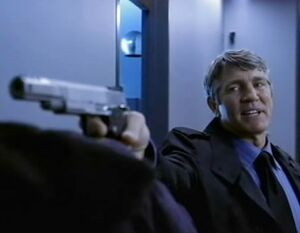 Mr. Bennet and Matt reach the level housing the tracking system, but unknown to them, they are being watched on the security monitors by Thompson, who waits to ambush them. Matt reads Thompson's mind and uncovers the ambush, saving Mr. Bennet's life. Mr. Bennet returns the favor by killing Thompson. Having taken care of Thompson, they proceed to the room housing the tracking device, and discover that it is Molly. Even having known all along that the tracking device was in fact a person, Mr. Bennet is surprised to learn that it is a mere child. Matt is livid, unable to comprehend that they are possibly needing to kill a child. In his state of surprise, he is knocked unconscious by Mohinder, who enters into a stalemate with Mr. Bennet: Mohinder's gun on Bennet, Bennet's gun on Molly.

As night settles, Ted is being escorted out of the city in an armed police van. Sylar awaits the van, flips it, and opens the doors to find an upside-down Ted held in position by his restraints. Ted screams that he is hurt, and Sylar offers to help him.

With renewed conviction of his abilities and of the steadfastness he must have as a true warrior, Kaito sends Hiro off to defeat Sylar, only to find that Ando had already left the shop. Ando, believing that Hiro would be unable to continue his mission to kill Sylar, bought a sword and left to hunt down Sylar himself. Kaito tells Hiro that should Ando try to face off with Sylar alone, Ando will die.

Audrey arrives on the crime scene of the flipped van, and finds that Ted's dead body is in it. The scene causes Peter and Claire to be stuck in traffic, so they get out of the car and walk up to police boundary of the scene. The three, separately, realize Sylar has struck again. Peter also realizes that the explosion can possibly be caused by Sylar, not himself, as they both now have the power. Claire tells Peter he has to stop Sylar, but Peter doubts his ability to do so due to their previous encounter.

At Linderman's office, D.L. and Jessica surprise the millionaire who is in the process of making arrangements for the Petrelli family to be helicoptered out of the city. After being slammed against the wall, Linderman reminds the two that he had arranged for D.L. and Niki's meeting since the beginning, and he is the one to thank for Micah. D.L. grapples with him and threatens him, but Linderman offers money to Jessica to kill D.L. instead and walk away for good. Jessica realizes that this is not what her other half wants, and returns consciousness to Niki who reunites with D.L. Fed up with the affectionate reunion and disappointed with Jessica's lack of ruthlessness, Linderman pulls a gun to kill Niki, but D.L. jumps and takes the bullet intended for his wife. As Linderman moves onwards to kill Niki, D.L. sneaks around and phases his fist inside Linderman's skull, killing Linderman. Niki collapses to her feet, holding a severely injured D.L. in her arms. 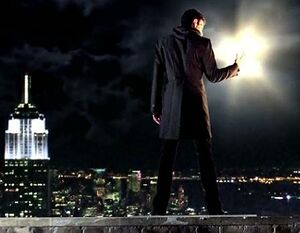 Nathan wins the election and in his official victory address, delivers a poignant speech; "they call it a landslide", he proudly announces. He also used Linderman's theme that the world was spinning out of control and in need of healing. He accepts his victory but also maintains that the world should have hope to change and help those in need. All while he is speaking, different heroes are facing their respective obstacles: Peter and Claire struggle to leave the city, Hiro pursues Ando who believes he must kill Sylar to save himself, Micah is trapped in Candice's custody, Agent Hanson endures another victim of Sylar, and Niki holds her dying husband in her arms.

The balloons drop and it seems as though everything will be all right for Nathan and his family. On a rooftop overlooking New York that very night, Sylar, testing his newly acquired ability, mutters to himself "Boom..."

"Destiny made a mistake."

"He is going to heal the world."

"The tracking system's on the 42nd floor. Get a read on someone."

"Yeah. You sure there isn't another way?"

"The reason I brought you here, Parkman, was so that you could get us to those elevators without raising a ruckus. Now, if you can't do that, you might as well give up on your wife and unborn child right now because no matter how far you run, they will find you."

"Didn't I throw you out a window?"

"What am I thinking now, Parkman?"