From Heroes Wiki
(Redirected from Berlin, Part 1)
Jump to navigation Jump to search 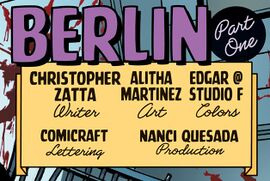 While Devin's partner, Bianca, explores a Wannsee lake, Devin argues with Gael about why Gael is really accompanying them on their mission to bag and tag the German. Devin suggests that Gael is there to interrogate his own fiancée, believing Bianca could be the mole the Company is searching for, but Gael denies it. However, Gael takes Bianca out to eat that night at a Berlin restaurant and tells her that Devin was right about why he was there. Bianca then decides to leave and join Devin, who is preparing a stakeout of the location they believe the German will show up to later that evening.

Meanwhile, the German has already arrived at his target, and taken care of the guards. While still inside the bank's vault, a mysterious informant arrives and tells the German he is there to help him. The informant warns the German that agents of the Company are after him, and claims to have fed them false data about the German's plans. The person also tells the German that killing will be necessary, and hands him pictures of Gael Cruz, Devin and another person. The German responds that killing will be no problem, claiming that he will take out the boss first, and the rest will tumble.