Episode talk:Turn and Face the Strange

I agree that this was a great episode, but I still think Cold Snap was better. I loved the story development taking place in this episode, but I consider Cold Snap to be the best because it was the first of this season to really be great. Dean 22:20, 7 April 2009 (EDT)

Okay I figured out that that was Sylar the whole damn time he was impersonating Sandra. The real Sandra was there as she met Sylar as Danko so she was there for at least some point. I'm not sure, but that may have been the real Sandra at the end. She acted more like the Sandra we know and I think that last thing with Noah was too much for her and frightened her too badly. Poor Danko though. Matt ruined his life in a way there. I don't like him, but I couldn't help but feel bad for him. I so saw the rescue by Hiro coming by the way. Now we know how Sylar survived Claire killing him: the Primatech fire melted the glass she put in his head. Noah said it while he was looking over Sylar's supposed body.--WarGrowlmon18 22:10, 6 April 2009 (EDT)

This title is absolutely true. This episode was definitely strange. And confusing. Shape-shifting is gonna become annoying fast... and strange. --Peter 22:36, 6 April 2009 (EDT)

I absolutely hated how matt just completely accepted that baby matt was his son... I mean, if someone said "this is you son with super powers," wouldn't you have some questions? Other than that, great episode :). Dean 01:52, 7 April 2009 (EDT)

I believe it sort of ties back with Season One's events, and the fact that the baby is named Matt Parkman. I loved the scene, and it gave me chills down my entire body in that good sort of way. --GSK 02:23, 7 April 2009 (EDT)

did anyone else thought that, the scene with Matt trying to shoot Alena was an illusion? I thought it was! And I thought he was going to shoot her (on the illusion). It could be cool.--Themd 16:21, 7 April 2009 (EDT)

Who Called How Sylar Survived Primatech?

This is the most reasonable theory I have heard and what I personally think on the matter. Sylar will be appearing on next season. Sylar live through both the fire and explosions due to Rapid celluar regeneration. The intense heat generated by either the fire or an explosion would melt the shard of glass. An explaination of why he wouldn't die from an explosion. Explosions did not kill Adam, claire, or peter due to Rapid celluar regeneration repair the flesh as its being destroyed. Thus they are never truly destroyed. Even if the fire did not melt the glass in sylar before an explosion he would survive. An explosion generates an intense burst of heat that would melt the glass before skin due to all the water that resides in the skin. And even if an explosion did occur near enough to sylar to kill him the glass would most likely be destroyed before the rest fo his body thus (as shown in other occurances) allowing instant regain of concussness and powers. —Default 22:27, 21 December 2008 (EST)

Turn and Face the StrangeR? 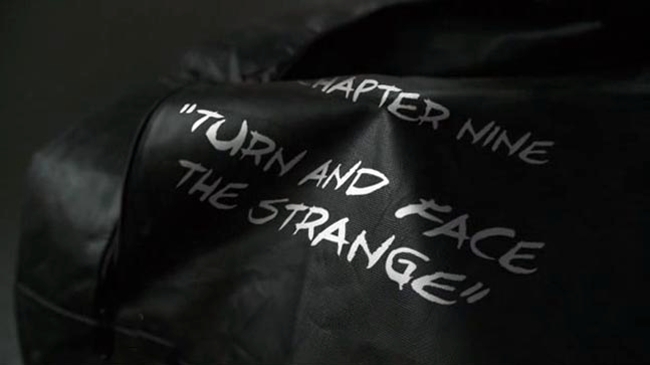 When Matt points a gun at Danko he almost grabs a gun on the table, Matt says "Dont you even think about it!" Lol, pretty rare quote for someone who is able to hear thoughts.-- Yoshi | Talk | Contributions 15:09, 15 January 2010 (EST)