On June 29, 2007, RyanGibsonStewart held an interview via email with It Takes a Village writer, Joe Kelly.

Joe Kelly: It's very simple--we talk to the producers about a few ideas, see which ones click, and then it's on to log lines. Once these short story ideas are approved, we flesh out a little more with an outline and finally to script. All along the way we get comments from the Heroes gang and NBC. I say "we" because all of the mans of Man of Action Studios are writing Heroes graphic novels this summer...not because I am royalty...; ) 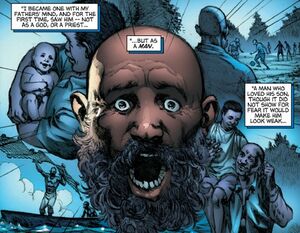 When writing a novel for Heroes, do you have to coordinate with the other writers to ensure all the information remains consistent between the episodes and the graphic novels? Do you write the script yourself or is it a collaborative process from the start?

How much creative control does NBC give you? What changes were made to your scripts? What notes were you given that were particularly enlightening?

First of all, they're not "our toys," so "creative control" is never a part of the equation. But that being said, it has been a fantastic experience working with these guys. Everyone is extremely cool and enthusiastic and excited to exchange ideas. The notes always make sense, and ultimately would reveal elements of character that I may have missed along the way.

Is there anything about the Haitian's story that you wish you could have put in the series but weren't able to for some reason?

Not really. We had a darker ending originally...waaaay darker, but that's where my tendencies lie. It wasn't really appropriate.

You worked with three different artists (Michael Gaydos, Staz Johnson, and Tom Grummett) on one story. What was that like?

Cool--They're a bunch of very talented guys who worked very hard on a short schedule. I thought the book looked great! Tom specifically pulled my fat out of the fire when I accidentally handed in a script [for It Takes a Village, Part 3 that was] one page too long. He compressed a scene perfectly so it would all fit! 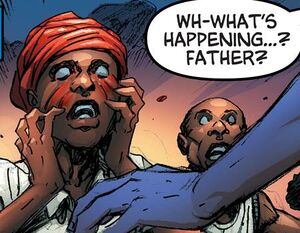 In Part 2, the Haitian manifests his power over his entire village, and from quite a considerable distance. This appears to be a bit different from other times he uses his power—-for instance, in Hiros, he wasn’t able to stop Nathan from flying, despite being at a close range. Can you explain the limits of the Haitian’s power?

Well, I'd have to leave the real details to the experts, but as far as this story goes, I figured that in his emotionally charged state, the Haitian's powers went "off the charts" because he knew nothing about control. Since it had such terrible results for him, I think he'd instinctively be much more about control after that discovery.

How much did you already know about Voodoo, and how much research did you have to do on the subject? Where did you find your research?

I did my research online. Found a lot of great stuff--the most interesting to me was how little of traditional Voodoo is "dark" as Hollywood likes to paint it.

In Part 2, Guillame says, “I lay with Samara and Delun.” I couldn’t find these names among any lists of Loa. Can you elaborate on who these two are?

What inspired the story about the serpent and the crane in Part 3? I've seen some references to it in martial arts, but I couldn't find anything about it from Voodoo or Haitian traditions. Was it your own creation?

Yes, I wanted to come up with a story that explained the Glyph in the terms of the Haitian's culture, and since the symbol looks a little like a snake with wings or feet, I started there.

I enjoyed the real-life references to the Duvaliers and the Tonton Macoutes. Can you tell us what year It Takes a Village takes place?

I wouldn't pin it down exactly, but about 20 years ago, give or take. 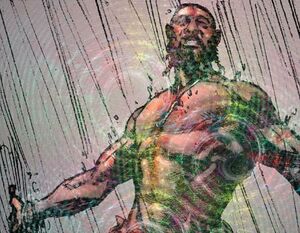 Does Guillame's power have a name? A lot of people have been debating on a name for the power. Is there one you have in mind, or is it simply "bliss and horror"?

No one would have named it in his village because they think of it as a spiritual power given by the Loa. However, I pitched it to the guys that he was a "walking drug." So essentially, he could send you on a "good trip" (as he does during the ceremonies) or a "bad trip" (as he does to the Tonton Macoutes.) Not sure if that helps to codify it, but that's my take.

I liked the idea of Guillame being a "walking drug"--great metaphor. People want to know exactly how the power occurs and where you came up with the idea of "bliss and horror".

To me, he messes with the endorphins of people around him--so when he wants people to be happy, their brains release more endorphins. When he wants them terrified, it's either an overload or some other brain chemical and they freak out. I also liked that it was related to the Haitian's power--brain system related.

Okay, I’m ready for a spoiler: What exactly is the Haitian’s name? :)