From Heroes Wiki
(Redirected from Our Lady of Blessed Acceleration, Part 2)
Jump to navigation Jump to search 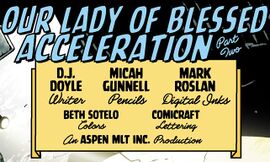 Daphne Millbrook races through a New York shipping yard and past a security guard unnoticed. She then breaks into a shipment container and steals a prototype. After hearing some noises, she leaves the yard as Peter Petrelli flees from the the Haitian, not far away.

Daphne then goes to Tokyo and meets with Yoji Hayata, a high ranking executive at Yamagato Industries, who has been stealing the company's secrets. Daphne offers the prototype that she stole in exchange for information on how to get into Kaito Nakamura's safe. Yoji, enraged, tells her that he wouldn't be able to get her in the safe even if he wanted to. He then calls for his men to capture Daphne but she quickly outsmarts them and then reaches Yoji, who tells her that only a Nakamura can enter the safe due to biometric locks. Daphne then flees Yoji's office to regroup, racing through the building to the roof, then leaping to the next building.

Two weeks later, Daphne overhears a newscast stating that Hiro Nakamura is now the new CEO of Yamagato Industries. Soon thereafter, Yoji sends Daphne a tip to a camera feed that shows Hiro and Ando talking. At Harajuko Station, she watches the feed and dashes off.