Shouldn't Kaito be a disambig instead of a redirect ? Here is a list of the kaito's page

Is Kaito's power accelerated movement/reflexes? He was way more nimble then he should have been with that sword. --Xmuskrat 17:04, 15 May 2007 (EDT)

I know it's been a matter of specutlation, but on this page of the Yamagato Fellowship site there is a picture of Takezo Kensei that shows rollover text of "Kaito Nakamura"...

When Kaito states that he's waited a long time for a Nakamura to ascend, is he referring to the ascension of humans to evolved humans? This would mean he doesn't have a power himself... did he mean something else? Puff0rx 09:00, 26 May 2007 (EDT)

When did we decide that Kaito died in Four Months Later? I know it seems very, VERY likely, but we don't strictly have confirmation as of yet... We saw his body lying in a pool of blood, but in this show, that doesn't necessarily mean the end. I think the introduction paragraph should be changed back from referring to Kaito in the past tense, to reflect that he may not be dead. Bohrok Awakener 14:34, 28 September 2007 (EDT)

What do you guys think about this comment concerning Kaito from CBR regarding the crime scene? --HiroDynoSlayer (talk) 10/4/2007 15:49 (EST) 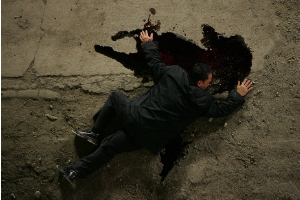 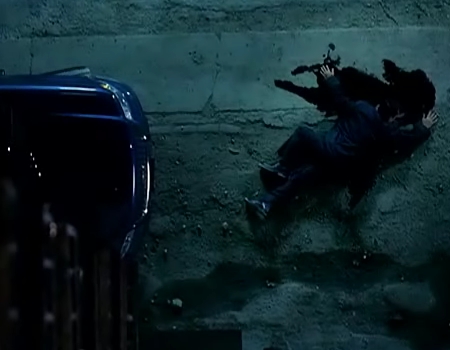 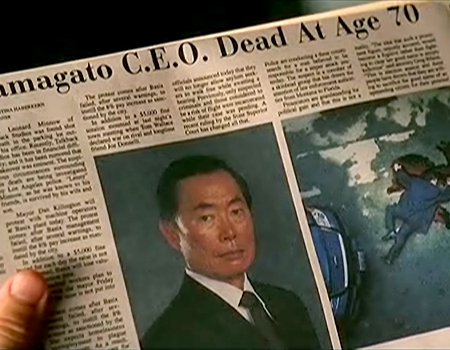 Well the picture is in the news paper as a crime scene photo. So who took the photo? the cops. and don't you think they would have checked the body at the crime scene to ensure he was in fact dead?.--Retractd 17:04, 22 November 2007 (EST)

I know this is a little late and I haven't seen any discussion about this so I'm going to throw this out there. From Landslide there was a brief shot of the reflection of Kaito's eyes in the sword. 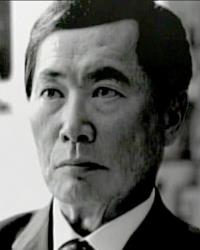 I'm sure I can't be the first one to say this, but I contend that these aren't Kaito's eyes at all. If you look at a closeup shot of Kaito like this one, I think they look totally different. I would say they look older? Maybe not older. Just different. The eye on the right (I guess his left eye) is totally different; the bottom of the eye in the top photograph makes this pronounced upward slope on the right side that is totally different from the bottom eye in the bottom photograph. Maybe I'm alone on this one. I dunno, but when I first saw this I had to watch it a few times because I was confused whose eyes these were supposed to be. I thought maybe there was another person in the room or something.

Anyways if this is true perhaps it might answer some questions (or raise some new ones) concerning Kaito's powers. Maybe he is much older than he looks. Or maybe he can manipulate appearances.Dadadave 11:57, 16 October 2007 (EDT)

I was thinking his power may be some kind of impact absorbtion. if you watch when Angela slaps him in Four Months Later, you can see he doesnt even flinch. This could also explain the theories of him getting up in the pictures after a 40 story fall.

In the Season 2 DVD box set's deleted scenes, Kaito reveals that he has the ability to see the variables of all outcomes, stating that that is how he has done so well in the stock market. Ynni 08:06, 29 July 2008 (EDT)

It is still listed as his known ability in the 'stats' box.

(CBR Link)
Question: “In response to last week's question about revealing Kaito's powers, I would like to ask if his revelation to Ando of what his power is in the deleted scene from the Season 2 DVD is considered official. Or should we assume that anything that happens in a deleted scene never did officially happen or what?”

Answer: Good question. Let the debate begin! What do you guys think? Official or unofficial? We will tell you this — when we break episodes, we do it not knowing what’s been cut from episodes because of the timing of writing, production and editing. So, weigh in Longshot, Dazzler, Mojo — What say you? --HiroDynoSlayer (talk) 10/14/2008 08:03 (EST)

What is the line Kaito says in the second half of the DVD? He tells Hiro what is needed if the formula is to fall in the wrong hands. Something about purity of blood, and "light"? I'd like to get the exact quote, because I want to try to determine what or who he was referring to. GabrielPetrelli 08:55, 23 October 2008 (EDT)

Events of "It's Coming

I think Arthur Petrelli's comments re: 'the catalyst' lend great credence to the theory that Kaito's power is as described in the deleted scenes (accelerated probability or the ability to take variables and establish outcomes). Kaito obviously has great foresight, even beyond death. --Dumpster juice 22:38, 17 November 2008 (EST)

Maybe he acccounts for Claire and Hiro teleporting in the past and helps Hiro, or copy the catalyst from present Claire and is how he got it in the first place :) - Discipol

He is already appear in 4 episodes so far :Second Coming , the eclipse pat 2 , Our father and Dual

Should Kaito's power be listed as Probability computation now, since the Heroes Reborn app is technically canon? Or is that app not considered canon? -Sincerely, Thrashmeister » talk- 17:47, 23 August 2015 (EDT)