Wouldnt this image, be a better lead image, Because:
+ It shows Sparrow invoking it
+ It's clear how the earth's moving the hummer
- the current lead image isn't very self-explanatory, doesn't portray action, and just looks like a picture of a stalagmite.--HiroDynoSlayer (talk) 05/12/2009 08:11 (EST)

I'm not sure I should be adding this section, but we ever rename this, just take earth and put geological. Same thing, classier name. Intuitive Empath - Talk - Contributions 21:01, 12 May 2009 (EDT)

Haha when I first realized the name of her power I thaught it was a reference to the teen titans character Tera. I get it now, but I wonder if anyone else thought the same thing. -Earl

With Rebellion Part 6, we now have more than nine images of the ability (one main image plus eight in examples gallery), this warrants an examples page and changing the examples section to selected examples right? Intuitive Empath - Talk - Contributions 14:30, 14 July 2009 (EDT) 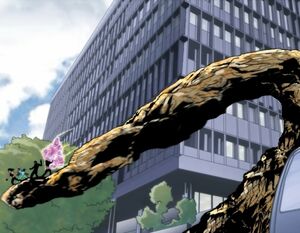 You have to be blind and deaf not to notice either an island with people flying across the sky or a pillar of earth rising from asphalt.

Did anyone get a picture of samuel absorbing the ink. And was he absorbing it into himself or onto his skin like a tattoo, I wasn't sure which. This should be listed as an example, shouldn't it? --mc_hammark 12:40, 29 September 2009 (EDT)

peter's partner, can't remember his name, said that william hooper was on the bus and that it was in his journal. Obviously samuel has put ink to paper, but since this is an assumption I don't think we can add this to the page. Can we? --mc_hammark 13:19, 2 October 2009 (EDT)

Oh, oh, I see what you mean now. I thought you meant when Samuel put an image of himself on Peter's newspaper. I guess I was just a little confused by the wording.--ERROR 14:00, 9 February 2010 (EST)

When Samuel brought down the police precinct, did he manipulate the building itself, or the ground underneath, the way he did when he (presumably) created the sinkhole. And can we say he actually created that sink hole? There are a lot of things I've said on here that have been shot down because it is just assuming that is what happened, well isn't the sinkhole thing the same? --mc_hammark 18:35, 27 October 2009 (EDT)

I think I may have figured something out. In Hysterical Blindness and Strange Attractors Samuel has made the carnival appear. I think he did this. Many people have speculated that someone teleported the carnival or created illusions. I, however, think that Samuel has moved the very earth, enabling him/the carnival/other people to travel extremely vast distances in the blink of an eye. It would explain why it was night when he and Tracy went to the carnival. A different time of the day for a different part of the country or whatever. Josh KorolenkoUTChronicles

I'm not a big fan of the current quote we have, the one about Samuel destroying cities and mountains. We don't know that Sparrow can magnify her power like Samuel does and having this quote insinuates that.--PJDEP 22:36, 17 December 2009 (EST)

If he thrives on other powers, in that future everyone has them so he could make earthquakes and lets not forget splitting the world in half.

So, by the most recent episode where Sylar is looking for ink and Samuel tells him he destroyed the last of it, and then Samuel is holding a pot with what seems to be dirt or something... It seems that Samuel is the one who uses his ability to make the ink! --Scorvi12 08:51, 9 January 2010 (EST)

Now, this is just a theory, but I think that terrakinetics cannot grow stronger with the presence of other terrakinetics. When Samuel became powerless in Brave New World, the only special nearby was Peter, who had just gotten his ability. Yes, there was Emma, Sylar, Eric, and Claire, but even with four people, he still should have been able to defend himself.--ERROR 14:11, 9 February 2010 (EST)

Regarding the number of specials around when Samuel couldn't use his powers: While there were initially 4 (Sylar, Peter, Emma, Doyle), when Samuel was being loaded into the police car, Hiro, Ando and Claire were there as well. It might, however, be speculative to include that since we didn't see him try to use his powers then (even if common sense would dictate he would probably try to, we can't really assume that).
On a similar note, did we ever figure out how the Carnival moves? When Samuel took Tracy there, we didn't see any other EH's around...as such, to say it was anything other than Samuel moving them would be speculation as well, right? Therefore, he was able to use some form of his power (to bring himself and Tracy to the Carnival) when only one other EH was present (similarly, he killed Mohinder and Joseph with less than 4 other EH's around, though that brings into question range and how much of his ability he can use). --Stevehim 15:28, 9 February 2010 (EST)

I think we should put about...

...the ability that The more people there are the powerful the ability becomes. The film about Samuel thought that he was special and powerful, not because of his ability but may be he was divine or somewhere, along those lines but reading A brave new world it is clear more people there are the powerful, although we not seen this with sparrow although she been with less people then what Samuel and Peter have been with.--50000JH 20:57, 20 March 2010 (EDT)

Metal comes from the earth. "Earthbenders" in Avatar: The Last Airbender could manipulate metal with concentration. Anyone?--Boycool42 08:25, 21 March 2010 (EDT)