Including Sylar and Mohinder

I think Sylar should be included on this page. He has shown feats that would require strength beyond a normal human's ability. Punching through the cab window and wielding the parking meter as a weapon (initially in one hand) would not be possible without some kind of power at work. We define it as 'the ability to exert greater than normal physical force,' which would apply even if he was using his telekinesis to supplement his strength (but we don't know that he was, and so all we truly know is that he was able to accomplish those feats, which would require greater than normal strength). --Stevehim 22:54, 13 December 2008 (EST)

Every person that has this power has had their own mechanics to it: Niki, Knox, Michael and Scott have all been given different aspects with the manifestation of this one power. Even Sylar ambiguously had way back in season 1. Mohinder's strength came as a result from his power of Enhanced Physicality or Mohinder's ability as it is called. What this is about is coming up with other suggestions to how this power may differ if another has it, so please come up with your own versions of Enhanced strength. Marcus

Ooh! How about drunken boxing from that one Chinese movie? Or perhaps that one adrenaline rush ability from the Fan powers article?

can we change the main image to... 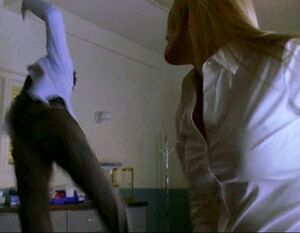 I think that this picture will look much better, then Niki (as Jessica) holding her Father up agaist a wall. It doesn't really show that the power is "super strength" alot of people could pin someone up agaist a wall. Anyone else agree or disagree? Samstorey 11:13, 1 January 2009

Why doesn't someone get a picture of Jessica when she holds Bob up against the wall because there's a shot there where you can see her holding him with only one hand and he is lifted several feet off the ground. Can't remember the episode though. Sometime in season 2. --Mc hammark 16:49, 30 April 2009 (EDT)

It seems that there are only two that naturally have this power, more so is it that they had differing versions of this power. Both Knox and Michael Fitzgerald had two separate and individual kinds of the ability, while Scott and Mohinder had the power without any extra needs or advantages. Niki was able to actuate her strength, only for it to cause a Jekyll and Hide affect on her mind and personality. Why I am saying this is because, Nikki, Mohinder and Scott were all Synthetics, in terms of the abilities' sources. In the changed future, many people seemed to have the/share the same or very similar powers, such as Flight. In this set future certain abilities were very common, possibly due to the fact that they could be - in terms of genetics - more like blood types. Some being common, others being rare, making it likely that if the Serum was given to a group of one thousand people, than a higher number of them would gain Flight, Super speed and, hopefully, Enhanced strength. And I wonder what other advantages natural borns would have along with the enhanced strength? -- Halfbreed1426

This is his power from Orientation. During his talk with Noah he specificly mentions the enhanced strength helping him, says "thank you Doctor Suresh" and says its a pretty useful power. Also, remember in A Clear in Present Danger when he said he wished he was stronger and faster??? Well it makes sense he took stronger as its very useful and plus until he encountered Edgar, the only known person with super-speed was dead.--WarGrowlmon18 19:11, 23 September 2009 (EDT)

I'm sorry if this has been stated before, but Niki, Mohinder and random soldier man all got enhanced strength from the genetic modification formula. I understand that this is supposedly a common ability for people to manifest once given the formula, but it just seems somewhat unprofessional for the writers to use the same power three times. --PJDEP 17:56, 11 November 2009 (EST)

I really think it's time to finally stop calling Knox's ability enhanced strength, i think we should make a vote. I think it's the same as calling levitation telekinesis, i mean it is similar but it isn't the same. Knox's ability is allowing him to feel someone's fear, if knox's didn't use the aspect that he was able to change fear into strength, we would't call it enhanced strength. I really think that this has gone to far and i also think that a lot of people agree with me. Should we make a concensus or something?-- Yoshi | Talk | Contributions 09:43, 22 December 2009 (EST)

ok, so I'm not sure if this has been suggested before for the same reasons. But i'd like to suggest a split into super-strength and enhanced strength. These names would back up the cannon names for the characters' abilities (Micah calling his mum "super-strong" and Knox's assignment tracker "Enhanced strength"). If you think about it, something has to have something too enhance it; in knox's case, it's fear. Niki's would be super-strong because she can be strong no matter what, so is always super-strong. Thoughts? Remember, this split would solve a few arguments. --mc_hammark 15:12, 20 January 2010 (EST)

I found several definitions for the words "super" and "enhanced" and felt that they should be listed here, for the sake of the argument. "Super" is described as;
• to a great or extreme degree : superabundant | supercool.
• extra large of its kind : supercontinent.
• having greater influence, capacity, etc., than another of its kind : superbike | superpower.
• of a higher kind (esp. in names of classificatory divisions) :

and "enhance" is described as;
• intensify, increase, or further improve the quality, value, or extent of : his refusal does nothing to enhance his reputation | computer techniques that enhance images.

Can we split this?

Was just curious where we're at with this. Ryan's comment on the freezing discussion would seem to indicate that we have to give Niki a separate power called super strength, at the very least, and it's pretty much unanimous (13-1 with the 1 person semi-conceding the point after discussion). Can we go ahead and do this split (or move into the phase of discussing exactly how we are going to split it...maybe people can make proposal pages or something)? --Stevehim 23:19, 11 February 2010 (EST)