We can leave Claude's name as "vagrant", but I think it's okay to call him Claude in general. Even though the name hasn't been revealed on screen, it has been released in other public media. Just my opinion, though. - RyanGibsonStewart (talk) 23:37, 22 January 2007 (EST)
I agree, I prefer Claude as well over vagrant. Revealing a name like this isn't spoilerish. Now if we were talking about Mr. Bennet's first name on the other hand... :) (Admin 09:35, 23 January 2007 (EST))
Does anybody else have an opinion this - I'd like to change "vagrant" back to "Claude". Afterall, Nobody ever calls Mr. Bennet by that name on the show as far as I can remember - he's always just "HRG" or "the man with the horn-rimmed glasses" or "Claire's dad". Plus, we include a lot of other little facts about places and people that are not revealed onscreen (Niki's age, for instance, was released in a press packet; we don't limit ourselves to only screenshots of Isaac's paintings - we also use promotional ones.) I say it's okay to call him Claude. - RyanGibsonStewart (talk) 15:22, 23 January 2007 (EST)

The AT said that with his power, Claude can "see what would otherwise be invisible to the average person". What does this mean exactly? Him seeing other invisible people is kind of an ability immunity example, but seeing things that are usually invisible? Borrowing a bit of physics from the Invisible Man series of 2000, when Claude becomes invisible, it would make him see things in a wider spectrum. And about the "why only some objects turn invisible", couldn't he choose what becomes invisible and what doesn't? Intuitive Empath 11:42, 1 November 2008 (EDT)

We need a trivia section -- why would an invisible man need money? Not exactly like he could walk up to a store clerk and buy something, and it's definitely not a morality thing, since he's just pulling it out of people's wallets.

Would explain where my keys got to though. :)

While Claude can presumably walk away with most of the necessities of life (food, drink, etc.), there are some needs and wants that you just can't carry. If he wants a service, for instance, he's going to have to reveal himself and pay for it. --Ted C 15:49, 26 January 2007 (EST)

I think he means services like health care, haircuts, counselling, etc, stuff in which a certain level of communication is required. --Reubs1 18:35, 26 January 2007 (EST)

Oddly enoguh, Aron Coleite and Joe Pokaski talk about this in this week's CBR Behind the Eclipse. They basically say Claude has full control over his invisibility, but chooses to remain invisible most of the time.--Hardvice (talk) 17:27, 19 February 2007 (EST)

Claude made it turn invisible. How can we add this into the definition? He can become invisible and make items vanish at his will. --Riddler 23:51, 19 February 2007 (EST)

Examples from Company Man have been entered at the top of the list, putting them effectively in chronological order, but I thought we were ordering such lists by airdate. Which is it? --Ted C 17:30, 27 February 2007 (EST)

Time for Examples of Invisibility?

What's our cut-off for an Examples article? Is it number of examples, or number of images? In either case, couldn't we merge the galleries and the examples on these like we did with The Symbol and Isaac's paintings?--Hardvice (talk) 04:20, 16 March 2007 (EDT)

Either would work pretty well. The first has a lot of the apartment in it, and Claude's face is kind of goofy looking, but it's a great shot of the power in action: you can see teh background rippling behind his mostly transparent bits, while his head is still pretty visible. The second one is a better shot as far as being mostly Claude and not having a goofy expression, but it's not as great an example, and it's black and white.--Hardvice (talk) 19:47, 16 March 2007 (EDT)

It is unclear whether the ability also hides sound — Claude covers Peter's mouth when they are hiding from Nathan and Mohinder to stop Peter from making noise (The Fix). However, despite making noise in the streets of New York, nobody seems to hear the two talking (Distractions).

Isn't it also worth pointing out that Sylar is (by all appearances) unable to use his superhearing ability to detect an invisible Peter in ".07"? (It's safe to say that this is the case, since he throws glass out in a very wide arc so as to catch Peter - if he could hear exactly where he was, why bother doing that?)

Maybe the ability to become "inaudiable" is the result of a more advanced use of the invisibility power. This could neatly explain why Claude would (at first) need to put his hand over Peter's mouth to avoid him making any noise whilst, later on, Peter is comfortable enough to hide every single sound he makes if he wishes. (Ulicus 15:07, 27 April 2007 (EDT))

The more simple explanation is that invisibility doesn't hide sound. As for walking through the streets of New York, it's so crowded and there are so many sounds that many people aren't going to even notice the voices. (Admin 15:31, 28 April 2007 (EDT))

I think there needs to be some distinction between the things specific to the power (like the comment about sound, clothes, infra red imaging, and the Haitian), and then specific to each person. (Peter grabbing Claire, the pretzel, the stealing). It makes sense in my head, but I feel like I'm not explaining it well. --Spellingbee 14:56, 21 November 2007 (EST)

The Haitian can maybe block power

Does anyone know the quote where Sylar and Peter are fighting in Mohinder's apartment and Peter goes invisible and Sylar says something along the lines of, "Interesting, i can't wait to try that one." If someone can find it I think we should put it up for obvious reasons.--BlueRavenBoy 23:22, 9 October 2008 (EDT)

On pages like Telepathy, under the ability holders, there's Confirmed users, and unconfirmed users. Maybe we could add one of those for this one, and list the "agent that tackled Flint in an alley" as unconfirmed? Radicell 07:53, 13 November 2008 (EST)

Hes mention in the notes and since some people thinks its Claude while others believe it is someone else with invisibility.Plus, it can also be someone else with another power.SPARTAN-077 18:27, 13 November 2008 (EST)

Seen by some, not by others

Do you think that it's possible for someone with invisibility to only hide themselves from some people? How was it that Noah, a skilled company agent, could not locate becky, yet Samuel shot the taser and hit her in one in a hugely open space? --mc_hammark 13:44, 13 November 2009 (EST)

Isn't it possible that the "invisible" person seen in a poster during Smoke & Mirrors is Becky? Just because she MAY wear male clothes during her act doesnt mean it can't be her :D AJUTChronicles

Becky remembers pushing Annie out of a window

Should this picture be there? I mean, yes, she was supposed to be invisible while doing it but you can clearly see her in the picture, she is not fading in our out. Is this really a good example?--PJDEP 23:26, 14 November 2009 (EST)

Re: Golden Handshake "Claude could only make his hand vanish"

Claude had full invisibility in this graphic novel. His had was just invisible in one panel because he was in the process of decloaking. If you've read the whole thing, you will see Claude can totally vanish when he wants to. User:Tarot 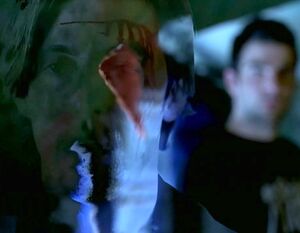 It looks like we can see the entire piece of glass, even though part of it is lodged in Peter's head. Am I looking at it wrong or is Peter actually transparent?--PJDEP 00:37, 6 December 2009 (EST)