Sylar, having his memories erased and replaced with Nathan Petrellis, must fill his new role as a Senator, Claire's father, Peter's brother, and Angela's son.

Angela manages to find Matt stepping off from a bus, who was intending to head to Building 26 to stop the agency. Angela convinces him to come with her, and they head to the room where Nathan was. Angela is thus horrified to find Nathan's body in the room. Noah then brings up the body of the unconscious Sylar, who explains that they intend to use Matt to alter Sylar's mind to believe he is Nathan, with Sylar's acquired ability of reading the history of objects enabling him to fully embody Nathan's personality and gain his memories. Matt initially doesn't want to, but Noah convinces him that Nathan would be the only person that could convince the President to shut down Building 26 or any such future agency. Matt finally agrees and does so, causing Sylar to forget everything about himself and become Nathan, and changes his appearance to look like Nathan. Noah, Angela, and Matt agree to keeps Nathan's death a secret. Volume Four ends with Claire, Noah, Angela, Peter, 'Nathan,' Mohinder, Matt, Ando, and a recovered Hiro all gathered around the burning corpse of Sylar, though actually the body of the morphed James Martin. The group then proceeds their separate ways, and Nathan confirms the President has indeed shut down Building 26, and the funds transferred so that Angela and Noah can start up their own company.

Six weeks later, Sylar, who now has memories of Nathan and none of himself, sits in his chair at his office and reads a newspaper article about the drowning "incidents". Angela walks in, and exclaims she hasn't heard from him in weeks and was starting to worry. Sylar says he hasn't felt like himself lately. Angela says that he needs to be happy and that this is "his" time. Sylar doesn't seem to pay attention. She asks if he heard a word she said, but Sylar just stares at a clock across the room, unknowingly studying how to fix it. He walks over to it, removes the lid, and turns the minute hand back slightly, stating that the clock is running a minute and a half fast. After the clock is fixed, Sylar appears to be a better mood. He then takes his jacket, and leaves the room asking Angela her choice of food for lunch. Angela stares at the clock, visibly shocked. 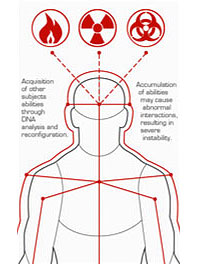 Sylar's innate ability is the power to determine exactly how things work. Sylar used this innate ability to discover how to take the abilities of other evolved humans. He determined that Chandra Suresh was correct that the abilities are based in the brain, and several of Sylar's victims have had their skulls opened and brains removed. By studying his victims' brains he is able to determine how their powers work and replicate those abilities himself.

Arthur revealed to Sylar that he can obtain the abilities of other people without killing them through empathy. Arthur left Sylar in a room with Elle, with whom he had a long talk, after which Sylar manifested her ability. It is unknown whether this manifestation was related to empathic mimicry or if it was purely empathy.

With this ability comes a 'hunger' for more knowledge and power. Sylar believes that it is this hunger that drives him to murder others and steal their powers. In one future, Sylar is able to control this 'hunger' and settle down to a normal life.

According to his assignment tracker file at primatechpaper.com, Sylar's control index is 76%. His data analysis shows his biological level at 40, cerebral at 85, elemental at 45, and temporal/spatial at 20.

During their conversation, Sylar and Noah confirmed that Sylar has multiple abilities (Fallout); however, apart from telekinesis, the Company was unable to identify what these powers were (Godsend). Based on Mohinder's statement to the authorities (Fallout) that at least six people from his father's list have been murdered by Sylar (prior to Zane Taylor), it's likely that Sylar had acquired at least ten abilities before he was infected with the Shanti virus in Kindred: the six Mohinder mentioned, plus four he acquired after Mohinder made his statement.

While he was infected, he attempted to take an ability from Candice Wilmer, but he was unable to use it. In an interview, the writers confirmed that Sylar was unable to acquire this ability while infected.

After he cured himself of the virus (Powerless) he was once again able to use his innate ability in addition to the ability he had acquired from Brian Davis, which he retained due to his guilt over killing Brian [1]. He was not, however, able to use the other abilities he acquired before his infection (confirmed here).

He has acquired several new abilities since curing himself of the virus and continues to acquire more, although he now seems to pursue them less obsessively..

He inherited intuitive aptitude from his father, Samson Gray.

With Sylar's ability enabling him to take the abilities of others, he has acquired many abilities.

Before he was infected with the Shanti virus (Kindred), he had acquired the following abilities (in chronological order):

Sylar originally stole enhanced memory from Charlie Andrews (Seven Minutes to Midnight). However, in Once Upon a Time in Texas, Hiro Nakamura went back in time, preventing the event from having happened. Thus, in the current timeline, Sylar never acquired the ability.

When he was infected, his intuitive aptitude and telekinesis were suppressed, and his other abilities were permanently lost.

He has since recovered from the virus (using a cure in Powerless), and subsequently demonstrated his original ability and telekinesis. Since that time, he has acquired the following additional powers:

Sylar killed Echo DeMille, severed Danny Pine's metallic arm, and knocked out Eric Doyle (Dual), but he apparently did not take their abilities; Doyle is still alive; Echo's body showed no signs of brain removal; and Danny's body was missing. Echo's ability is the same as Jesse Murphy's, which Sylar had taken previously.

Telekinesis is Sylar's most commonly observed acquired ability. Before his infection, he frequently used freezing as a secondary offensive ability and the passive enhanced hearing as well. Since recovering from the virus and acquiring the abilities, he often uses the passive abilities of lie detection and rapid cell regeneration, and he also seems to favor electric manipulation and shape shifting. He has demonstrated the ability to use at least two of his acquired abilities at the same time (The Hard Part).

Possibly because of his intuitive aptitude, Sylar's control over an acquired ability is often superior to that of the person from whom he obtained it.

Because his memories have been replaced with those of Nathan Petrelli, he is only actively aware of his power of flight. While he is unaware of his other abilities, elements of his intuitive aptitude are still apparent.

- Sylar, convinced that he is Nathan.