The Chicago National Bank is the bank that Pyro robbed for his second-to-last test.

Lord Noh and his apprentice are on top of the bank. They discuss Pyro’s final test – to rob the bank without being caught.

Chandler goes to the bank to open a safety deposit box. He small-talks with an employee. Before he can say what he wants to do, Pyro walks in and scares everyone to the ground. He goes to rob the safe, but Chandler runs up to arrest him. Pyro lights Chandler on fire.

Chandler burns to death. Pyro grabs the money in the safe and throws it in a bag he brought with him. As he is about to leave, he sees Elizabeth dialing 911. He holds out his hand to burn her. Chandler regenerates and knocks Pyro unconscious with the fire extinguisher. 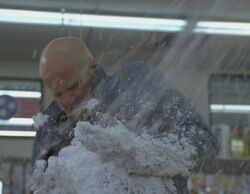 Lord Noh walks in. He fights with Chandler and shatters the windows.

Meanwhile, Elizabeth dials 911 and tells the police the emergency. She sneaks out the back door and flees in her car. Chandler knocks Noh unconscious and the hostages run. Chandler gets in his car and starts to drive to the police station.