Two weeks ago, Lieutenant Caine enters a CPD interrogation room. He sits down opposite Pyro and says, "Xander, what have you gotten yourself into now?"

Pyro says, "I met a man who promised me unlimited power as long as I replaced him as a leader. The next guy would have done the same thing. Well now I know Noh was a liar and a killer."

"Xander, Xander, Xander...We have so much evidence against you! You could go to jail. Wait, you say you're done with Noh? Done being his apprentice?!"

Eleven days ago, following threats from Lord Noh, Caine prepares to transport Chandler, Matthew, Elizabeth, and Pyro. Matthew is being transported to jail, while Chandler and Elizabeth are being taken to a secure location where they will be released. Pyro, who is in flame retardant gloves, is being taken to a state Witness Protection facility in Illinois. This is the first time all five of them have been in the same location.

Before they are loaded onto their different buses, Pyro whispers to the others, "Did you tell him anything?" to which they answer, "No." He then asks Chandler, "You remember what we talked about?" and Chandler answers that he does. Pyro waits until they are separated. He burns fire from his whole body to escape his binds, melting his handcuffs. When Chandler sees this, he breaks his hancuffs, and then Elizabeth's and Matthew's. As the bare Pyro fights off the police, the rest scatter. Elizabeth and Matthew escape because Chandler acts as a distraction for Caine. Caine shoots and arrests Chandler. Pyro returns into the police department and enters the evidence room, where he burns everything relating to himself and the other prisoners. He drives away.

36 hours ago, Chandler meets with Lieutenant Caine in the correctional facility where he is being held. Caine asks Chandler what he wanted. Chandler says, "I will tell you everything I know about the 'Congregation' -- names, locations, crimes." Caine asks, "What's the catch?" Chandler answers, "I want full immunity for Elizabeth Castle and Matthew Smithson," and Caine says that can be done. He then says, "Okay, spill it." Chandler spends a few hours telling Caine everything he knows about the "Congregation", gathered from his father, his video conference with Pyro, and his own experiences with Noh. Chandler says, "Noh said they tracked me because of my phone calls, and then Pyro somehow appeared on every screen in my dad's house. Check for every known technopath within 100 miles of Chicago. Caine calls his analyst on the phone and has him do a search. When Caine tells Chandler that there are 4 technopaths in that area, Chandler says, "If he was friends with Pyro and those guys, he was probably under 30." Caine walks away for about a half-hour. After he narrows it down to one man, he comes back to Chandler, saying, "You're in my custody again." 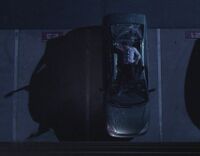 Caine, Chandler, and police officers approach Laug Wolfe's apartment. Chandler is released from his handcuffs and given a Kevlar vest like everyone else. Caine tells him not to try anything stupid. Then they enter the complex. The lights turn off, and all their phones and radios shut down. An officer asks if they should wait for backup, but Caine says that their guns and their minds still work, and that's all they need. When they raid the apartment, no one is there. The television is on and playing a live video feed from the security cameras in the hallway. There are dozens of computers, each screen saying "Hahaha!" All of the sudden, the TV shuts down and says, "Goodbye," triggering an explosion in all the other computers. Caine yells for everyone to move, but only a few escape the explosion. Chandler doesn't escape it, but manages to heal. He uses the explosion as a diversion, jumps out the window, heals, and runs away.

Two hours ago, Lord Noh is in Elizabeth's house, tying her up in a closet. He tells Pyro, who has rejoined him, "I'll alert Smithson, and he'll come to save her. But I won't be here; I'll be waiting for him. And when he comes, I'll kill him once and for all." When Noh dials Chandler's phone, Pyro asks to do it. Chandler is in a motel room when he gets the call from Pyro. He answers it, and Pyro says, "Chandler, it's the apprentice. If you want to save your girl, you better hurry."

Chandler drops the phone and runs on towards approaching storm clouds.