Amid Zahir is an Egyptian man who has the ability to manipulate sand. After his "family" tried to kill him, Amid went on a murderous rampage through Cairo.

While walking home from work one day, Amid comes across a jewellery store selling a strange necklace. He asks the clerk what it means and she informs him that it is the Japanese symbol for Godsend. Amid continues home and calls out to his wife Zara. He hears a noise in the house and rushes to see if Zara is hurt. Instead, he finds her passionately embracing another man. Shocked and hurt by her betrayal, Amid calls her a cheating liar and leaves.

He meets with Zara's father, who tells him that since he is no longer involved with his daughter, he no longer has a place in his company. Amid, broken and defeaten, goes back to the jewellery shop and finds Zara and Mike shopping for rings. Mike buys Zara the symbol necklace and Amid attempts to kill them both. He is shot and while he is recovering in hospital, Mike and Mr Vahava set his floor on fire. After he survives the fire, Vahava flies Amid's severely burned body into the middle of the desert and leaves him there. Hours away from death, Amid lets out a heavy sigh and his entire body decomposes into sand. He reforms himself into a sand form and finds that he is somehow holding the necklace.

Seeking revenge for his attempted murder, Amid conjures up a sandstorm that pursues Mike through the desert. When Mike's plane nearly avoids his reach, Amid makes a face stretch from the sand, enveloping the plane and Mike. When the sandstorm clears, Amid stands alone, clearly pleased with his revenge.

Amid gets into Vahava's office and materializes. Vahava, afraid, tries to shoot him but Amid's gunshot wound simply leaks sand. Smiling, Amid raises his hand and the sand from his wound shoots towards Vahava. The force of the sand is enough to shatter the window but Vahava manages to duck for cover. Much to Amid's surprise, Vahava throws a fireball that ignites Amid's body. He decomposes but quickly rises into a might sandstorm that fills the room. Scared, Vahava tries to call for help but Amid charges into him and pushes him out the window.

Now a deadly sandstorm, Amid charges through Cairo, heading for his last target: Zara.

Angry, Amid uses his power to send a massive sandstorm through Zara’s house. Tina tries to stop him but he is able to easily protect himself from her punches by deforming and reforming himself. When Ryland tries to kill Amid, he sends the full force of his storm upon the agent, killing him.

After Tina and Zara escape, Amid locates them at a diner and uses his power to rip apart the diner. He and Tina have another fight, with him once again becoming invulnerable to her power. When Zara screams that she didn’t want to hurt Amid, he stops the fight. He sends Tina, Zara and all the other people flying into the walls and disappears. He reappears at his bunker and holds a photo of himself and Zara after their wedding. He remembers the night of his accident, during which Mr Vahava told him he was special. Believing that Zara intended for him to die at her father’s hands, Amid says that she must pay.

When Tina and Zara try to leave Cairo, Amid generates another storm that pushes them back into the desert. The storm increases in velocity and begins to attack the city. Knowing that it is the only way, Zara leaps from the plane and down towards the desert floor. Amid makes the sand reach up and grab her, dragging her back to an unknown place. Sometime later, at Amid’s bunker, the ripped photo of Amid and Zara is pushed back together by a tuft of sand.

Growing up in a middle class Egyptian family, Amid developed a sense of longing for success. His prayers were answered when, on his seventeenth birthday, he met one Zara Zahir, who introduced him to the high life. Records show that Amid and Zara fell in love but that Mr Vahava, Zara's father and a close associate to The Company, did not approve. Amid and Zara eloped and returned to Cairo with Zara pregnant. She miscarried and Vahava finally took pity on Amid, giving him a job as his assistant.

Amid spent the remainder of his life aiming to please his wife and father-in-law. Climbing his way up the corporate ladder, Amid became Vice President and became a work a holic, which possible drove his wife into the arms of another man. Vahava, fed up with Amid, attempted to kill him but manifestation of Amid's ability saved him. Going on a murderous rampage, Amid was finally stopped by agent Tina Bui.

Amid suffered severe psychological trauma after his murder attempt and went into shock. Months later, his fear and pain had turned to a schitzophrenic belief that everyone was out to "get him". His lust for vengeance and the belief that Vahava, Morgan and Zara should pay drove Amid over the edge and into an uncontrollable rampage. 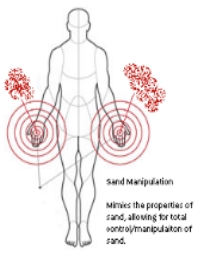 After suffering fatal burns and emotional anguish, Amid forfeited his life while in the desert and completely decomposed into sand. Seconds later, he reformed into a sand being and was able to move with great ease. Since then, he has learned to manipulate his sandy form. He is able to control sand to such an extent that he can create vicious sandstorms.

According to his Assignment Tracker, Amid's control index is 65%. His biological is 74, his cerebral is 32, his elemental is 79 and his temporal/spatial is 19.