Hachiro Otomo created a construct of himself to guide Miko and Ren through both Evernow and the real world. This construct normally appears in red samurai armor.

Miko makes her way through Yamagato Tower in Evernow, the place she saw him being taken. Ren notices that in chasing the construct, Miko has reached a new level due to the different view outside of the tower's windows. Finally, Miko locates him in the upper levels of the tower facing a window, but the construct tells her that he is not her father but rather a creation of Hachiro's meant to guide her on her next mission. The Hachiro construct points to the Eternal Fortress off in the distance and tells Miko that she must rescue the prisoner inside, explaining that the Eternal Fortress is the only prison that can hold "the Master of Time and Space." After the Eternal Fortress is cloaked by Richard Schwenkman, the construct disappears, telling Miko that she has to finish this mission alone. 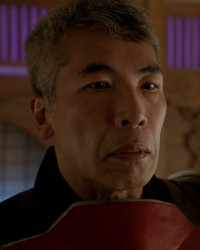 As Ren Shimosawa searches message boards for information on Miko, a samurai in red armor appears and stares down at Ren before leaving the café. Ren questions whether or not any of the other patrons saw the samurai too, but no one responds and Ren follows him. Ren later spots the samurai across the street and follows him to a dojo.

Inside the dojo, Ren is approached by the samurai who, to his surprise, looks like Hachiro Otomo. The samurai explains that he's not really Hachiro but is just really construct of his while the real Hachiro Otomo is trapped in the future. Ren tells the construct that there are easier ways to send him messages and is told that he has a new quest: to save Miko who is in the future and dying. Ren asks how he'll get to the future and is told to find a time traveler. The construct tells Ren that there is a bridge between the present and the future that he can use at Gateway in Odessa, Texas and he must find a way to "be sent with the others." The construct gives Ren a necklace and tells him that he will need that as a key. The construct then leaves as a confused Ren calls after him. Moments after the construct disappears, so do all the other fighters in the dojo, confusing Ren even more.

Later, Ren sits at a bus stop studying the necklace the Hachiro construct gave him and trying to understand his directions. Ren spots a bus to Odessa with an advertisement for the Gateway community built by Renautas. Ren realizes that this is what the construct meant and boards the bus to take up the quest he was given.

While making his way through Gateway with Emily Duval, Ren finds an elevator that he realizes leads to the core of the facility where Tommy Clark is. The two are unable to access the elevator, but Ren notices a knob with an indent of the symbol and places inside it the necklace Hachiro gave him. The necklace activates the elevator and Ren comments in Japanese "very clever Hachiro-san."

Ren discovers that the necklace the construct gave him releases the evos trapped in stasis pods in the future, including the real Hachiro Otomo and the real Miko Otomo. Hachiro shows knowledge of his construct's actions, stating he chose Ren as Ren is the best gamer he knows and has the heart of a warrior.