Adam Monroe is probably the white-haired guy, but there's no way to be sure. Since there's no way to tell, I don't know why we have a page about him. At most, there should be a note on group of twelve that Heroes: The Mobile Game lists one of the founders as Adam Monroe. Until we can match a face with a name, I don't see any point in having this article. Having both pictures is not a good idea because Adam is one or the other, not both. -- RyanGibsonStewart (talk) 12:33, 18 October 2007 (EDT)

Lots of interest in this article 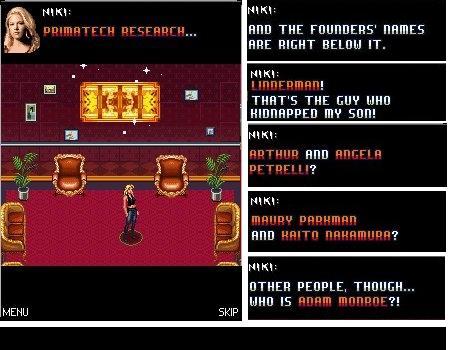 i think that Adam monroe is actually kensei, because of his powers he is immortal. he is the person who had been killing the members of the company.

The entire reason I dug up and posted the file-picture of Adam yesterday, was so that it could be used for his charbox's image instead of the 'image not available' filler, until a real picture of him becomes available. This isn't a new precedence. We do this on a lot of pages. All of the following people have a infobox picture that simply lists their name, if that is all we have of them. Felipe Acerra, Abu Aswan, Byron Bevington, Penkala Burton, Tracy Chobham, Harry Fletcher, Pam Green, Michelle Valcek. (You could also site all of Chandra's Journal personnel too, which use their journal page as their charbox image.) I am going to move the pic back. We should let it stay there until we get a real pic of Adam, which will probably be pretty soon anyway. Also, the 'need more pictures banner' is unnecessary too, because we have a lot of pages that only have one single image, and don't have that splash banner. --HiroDynoSlayer (talk) 10/31/2007 07:14 (EST)

So should we operate under the assumption that Adam will be his main name for the series until told otherwise? I've noticed Kensei's page has been changed to reflect that the name's more of a cover identity than a true one. --PeterDawson 00:43, 6 November 2007 (EST)

GN 66 implies that Adam Monroe is not his birth name, it is just another alias he used like Takezo Kensei & Richard Sanders (as revealed in GN 66). Since he is credited as Adam Monroe that is what the page should be called, similar to how the DL Hawkins page is called that even though we know what the initials stand for now.--Snow Leapord 09:24, 1 January 2008 (EST)

I guess he's a very good bet concerning the candidates for Kaitos murderer. To me it's clear that it couldn't have been Maury, his body doesn't fit with the appearance of the guy in the trenchcoat. This would also explain why Ando didn't see the killer. He just regenerated after he fell down the building together with Hiro's father and then just bailed. And since he's been locked up till (around) the day Kaito and Angela received their death threats it's clear why Nakamura said something like "Of all of them, I never expected it would be you...". I'd go "all in" on this ;) --BloodyFox

Ok I may seem dmb but how did both Peter AND Adam manage to get out of the cell? We know Peter phased, but surely even by touchng Peter Adam wouldn't hsve been able to get through the cell wall right? he was have had to take in Peter's ability? or am i completely way off the mark here?--   peterforpresident   talk  contribs  my rpg

People seem to keep forgetting that empaths can't absorb abilities from each other. I'm just saying this because that was your guess, not to be mean or anything.--ERROR 12:48, 22 June 2009 (EDT)

We know that Adam has lived in both England and Japan, but are there any other places? He stayed in the Company's little prison in Hartsdale, NY, which is in the United States, for thirty long years. Is that considered a home? Also, Adam owns a Montreal warehouse, which seems to be a home to him. Would that be considered a home?--Ice Vision 09:30, 23 November 2007 (EST)

In 1671 Adam/Kensei is clearly late 20s - late 30s, If he was born in 1584 he would be 87 years old (surely he would've figured out something weird is happeneing as he looks so youthful) making him 422, thsi can't be right. However he is said to be "about 400" in the character page. He would have to have been born around 1600 for this to be right, which is clearly wrong. Shouldn't age be set at "Unknown" until it is revealed by a canon source? MrLore|talk|Contributions 10:32, 29 November 2007 (EST)

HIRO: (subtitled) We found it! (He’s looking at an ancient Japanese warrior’s outfit for TAKEZO KENSEI (1584), complete with matching samurai sword. On the sword’s hilt is the SYMBOL.)

Since it appears that the opinion in question is that it was a visual reference, and your link goes to a picture, I think they can safely follow it without the sky coming down or whatever it is you're afraid of.--Hardvice (talk) 01:22, 9 December 2007 (EST)

I'm not sure what you are saying here, with the whole "opinion in question" statement. I was simply providing evidence that the 1584 date doesn't come from the script, and the image seems to imply it's a birth year (what with the "-"). I'm not quite sure where Buddhist folktales come in.--Tim Thomason 20:26, 9 December 2007 (EST)

I think they really fumbled the age thing. Even ignoring the 1584 bit, he states he's over 400 years old, which puts his latest birthdate at 1606-7. But the way we have it listed, he realizes he doesn't age in 1692 when he's 42, putting his birthdate at 1650. This means he hasn't lived for over 400 years. Even if we assume he meant that he realized it prior to 1692 (eg - it was just awkwardly phrased), he was surprised to discover his healing ability in 1671. So either he was ok with not aging but flipped out about being able to heal (to the point of thinking he'd been cursed), or he wasn't yet 42 in 1671, which means his earliest birthdate would be 1630, still missing the 400 years by a good amount. Stevehim 23:55, 11 October 2008 (EDT)
Rethinking this a little bit, it is possible that the following happened.

What else was Adam after in the Vault

The Trial of the Black Bear info

Should this be here or not? It's obviously a legendary tale involving Kensei that may or may not happened. For all we know, Yaeko wrote it as a way to directly honor Hiro.--Tim Thomason 19:40, 8 December 2007 (EST)

When Adam says he has his "newest bride out there", I read that as either a symbolic representation, or a hope for a future wife. It's certainly very possible that he got married since 1977, especially in recent days. However, until we have confirmation of this, I kinda think we should leave this "newest bride" off the infobox. -- RyanGibsonStewart (talk) 20:23, 1 January 2008 (EST)

Ok, can we use "unnamed woman" to fill the SO box? He is referring to someone else in this novel. Whether or not she's married to him we are not certain, but Adam is certain that she is out there and she will find him. That seems pretty specific to me that he has already met and is involved with this newest lady.--MiamiVolts (talk) 21:04, 1 January 2008 (EST)