Adam Monroe was an evolved human with the ability of rapid cell regeneration. His powers were so advanced that he was unable to age or die, making him near-immortal. He originally discovered this while living over 400 years ago in feudal Japan (as Takezo Kensei, one of his many aliases). Adam, with time, saw the world to be corrupt and in need of a massive cleansing of humanity. To aid him in his plans, Adam brought the Company's founders together, but in the end was betrayed, forcing Adam to rely upon himself to save the world. After the failure of his plans to "cleanse" the world, Adam was killed by Arthur Petrelli, who stole Adam's ability, rendering him mortal as he aged 400 years in a few seconds. 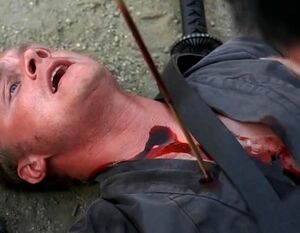 Kensei learns he can heal.

After Hiro stops time to save a fake Kensei, the real Kensei emerges and argues with Hiro. The legendary swordsmith's daughter from Otsu takes Kensei's sword, stating that her father made the sword and blaming Kensei for allowing Otsu to burn. After Hiro disguises himself as Kensei in the Battle of Twelve Swords, Whitebeard and his men take revenge upon Kensei and shoot him with arrows. However, Hiro is shocked to see Kensei's wound heal right before his eyes. Kensei then ponders upon the possibilities of his new found powers and that it will make him "richer than the Pope". Hiro, still wanting Kensei to follow the stories that were read to him as a child, teleports them both to Whitebeard's Hidden Fortress, insisting he fights past the ninety angry ronin and claim the fire scroll. From there, Hiro pushes Kensei along the path of the legends told to him years ago, which includes Kensei's love for Yaeko. The three come upon Whitebeard's camp to save Yaeko's father, and find that Whitebeard is making guns. The four of them leave the tent and proceed away from Whitebeard's camp. On their leave, Yaeko gets shot at but Hiro teleports them away so she avoids getting hurt. Kensei goes to look for them, and finds them alone, kissing. Kensei betrays Hiro and Yaeko by helping Whitebeard. Hiro escapes and tries to destroy Whitebeard's arsenal, but Kensei finds him and tries to defeat him. Gunpowder kegs catch on fire, and Hiro escapes, leaving Kensei for dead.

In the present, Kaito Nakamura stays on the rooftop of the Deveaux Building after receiving a death threat. A mysterious hooded figure appears. The figure tackles Kaito and pushes him off the building, then disappears. When Hiro returns from the past, he teleports himself to the rooftop on the night of his father's death, and finds that the hooded figure is Kensei, who survived the hundreds of years.

Peter and Caitlin find a note (signed "Adam") in Montreal addressed to Peter, warning him about the Company. After Peter returns from the future, Adam greets Peter. Peter, having forgotten Adam, remembers what happened to him over the last four months, and his time spent with Adam. They go find Victoria Pratt, where Adam kills her. They find out the Shanti virus is held in Primatech Paper, and travel there. Hiro freezes time to kill Adam, but Peter stops him. The two travel to the vault, where Peter rips the door off. Peter and Adam are confronted by Hiro again, but Adam gets into the vault as Peter is distracted by Matt and Nathan. Inside the vault, Hiro tries to stop Adam, who has the vial containing the virus hidden behind his back. Adam tells him that God had the right idea in flooding the world, wiping out humanity and letting the few remaining people have a new start. Hiro grabs Adam's shoulder and the two teleport away, with Adam letting go of the vial with the virus. Later, Adam is seen screaming hysterically in an unmarked grave in the Aoyama Cemetery, where he has been buried alive.

Hiro and Ando dig up a coffin and open it to find Adam Monroe sleeping inside. Hiro leans in as Adam suddenly awakens, calls Hiro's name and grabs him by the neck.

Hiro asks for Adam's help, but he refuses. Hiro teleports Adam back into the closed coffin, out, and in again. Hiro tells Adam that if he agrees to help them, he will give Adam a more spacious cell. Adam eventually agrees. Hiro explains the theft of the formula to Adam, who suggests Angela Petrelli as the culprit. When Hiro tells him that she was the one who sent them to find the formula, he claims to have a plan, and takes Hiro and Ando to "specials for hire" bar. The bartender, recognizing Adam as the man who previously had an affair with his wife, attacks him. Adam flees the bar, and evades Hiro and Ando only to be captured by Knox. 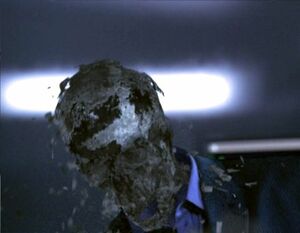 Knox brings Adam to meet his boss at Pinehearst while explaining to Adam about his own ability. When Adam discovers that Knox's boss is in fact the bed-ridden Arthur Petrelli, he becomes visibly frightened and tries to escape. Knox forces him back, and Adam begins screaming that he could be of use to Arthur before his hand is forced atop Arthur's. Arthur then uses his ability to steal Adam's. With his ability gone, Adam ages rapidly and withers to dust.

Adam is depicted in a painting by Isaac Mendez in a 9th Wonders! comic book having a sword fight with Hiro in Feudal Japan, reminiscent of their fight that led to his original apparent death.

Arnold time travels to Coyote Sands in 1961, before its construction was finished. Adam whacks him on the head with a shotgun, knocking him out. He says that he hasn't seen that "trick" in a long time.

Adam wakes Arnold up, commenting that he had a nasty fall. He asks Arnold what his name is and Arnold says that he cannot remember. Later, after Arnold has a new job and a new life, he and Adam have apparently become friends. Adam visits Arnold, or "Ernie", one day and tells him that he will be leaving. He wishes him the best and leaves.

As Hiro is dying, he has a delusion where he is in the Burnt Toast Diner where Adam is dressed in a suit and sitting at a desk. Hiro wonders if he is dead and Adam announces it is for the judge to decide. He then says that the case is The World vs. Hiro. Adam acts as the prosecutor and accuses Hiro of violating the laws of space and time for his own personal gain with no regard for the consequences of his actions. Adam calls his first witnesses to the stand in the form of a young Kimiko Nakamura and Ando Masahashi.

Adam questions his witnesses over the slushy incident but is objected by a present-day Ando, who is acting as Hiro's lawyer. Ando claims it helped two people fall in love and Adam asks Hiro if he believes meddling in the past is okay as long as no one gets hurt. Hiro agrees and Adam calls his next witness: Sylar. Adam has Sylar recite his victims to the jury, reminding them that it was possible because Hiro let him go after saving Charlene Andrews. Adam asks Charlie to come to the stand but reminds everybody that she cannot, as she is lost in time. He then has Hiro explain how Charlie was taken.

After Hiro confesses his "guilt", he is led into a white hall, but his late mother turns him away. However, Adam is waiting for him, armed with a katana. Hiro and Adam sword fight and Adam continuously attempts to force Hiro into the light behind him. Hiro fights back, eventually overpowering and defeating Adam.

Adam's name appears on a file held by Mindy Sprague two months after his incarceration.

Angela is reviewing Mindy Sprague's file for the Company. She mentions Adam and him showing his true intentions that Mindy was the one.

One of the Primatech files that Quentin Frady sees on the Renautas root directory is titled "Monroe".

Mindy Sprague's Assignment Tracker 2.0 file states that the Company had originally placed Adam as a safeguard at Three Mile Island, but they changed their mind and replaced him with Mindy instead.

In Hiro's seventh blog post, "Mindy Goes TMI", Hiro uncovers that Mindy was holding a file on Adam and Hiro wonders what Adam has to do with this since Hiro's father locked him up there year before this incident.

In Hiro's eighth blog post, "More Strange Video", Hiro reports that Ando has convinced him to stay at Yamagato Industries and search the Danger Room for any material on Adam.

After receiving news of Claire's apparent death, Angela thinks back to when the Company's founders found each other. She remembers that Adam was always saying that if they worked quietly behind the scenes, they would do right by the world. She thinks that he was arrogant.

Adam possessed the ability of rapid cell regeneration. Like Claire, Adam was sometimes unable to regenerate if an object was inside of his body until that object is removed (Lizards). Adam initially appeared in 1671 as a man in his late twenties to early thirties, and was able to survive for hundreds of years without apparent aging, as he had a similar appearance while active in 2007.

According to Angela Petrelli, after a certain amount of regeneration, a person with this ability stops physically aging (Cautionary Tales).

The burns Adam received from a lightning bolt at the end of Out of Time healed much faster than any other example of rapid cell regeneration in the series, indicating that Adam's regenerative ability may have improved over time. Adam's incredible resilience was also demonstrated in Revolutionary War, Part 2, where he appeared unfazed despite being stabbed repeatedly in the chest and heart by multiple opponents. He also manages to survive without oxygen in a coffin he is buried in by Hiro as seen in I Am Become Death.

In Four Months Ago..., Adam revealed that introducing his blood into a wounded person's body will cause rapid healing of the injuries.

Without his powers, his body ages to dust as his powers apparently keep his advanced age back.

Prior to Heroes Reborn starting, the Heroes Reborn app was released with a video summary of Adam's history. The summary included:

"First you show me that I can be harmed by no weapon, and then you cut me deeper than any blade possibly could."

"As long as I have breath, anything you love I will lay to waste. I swear... You will suffer."

"Only gods have lived as I do!"

"In defeat the truth raged at me. I was alone... while gods should have disciples."

"I believe this is mine, Carp."

- Adam (to Hiro) (Angels and Monsters)

"Objection your honor, he's reciting the opening to Quantum Leap."

Please refer to Theory:Adam Monroe for fan-created theories and other speculation.