Okay so i just did my best to show HOW someone could possibly get the symbol out of this one---- and this was my best shot --- this is rediculous --- who in the right mind would see this -- but then again --- i see the symbol places as well --- the onlly thing that would lead me to believe that this is the symbol -- is the fact that they had to set it up like that in that crazy mess. 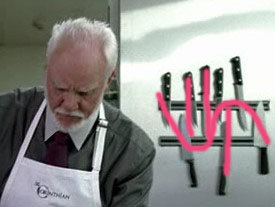 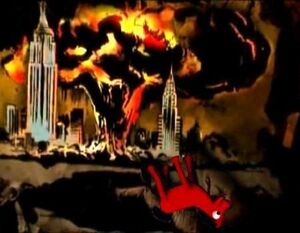 Did Claire's geometry book really appear in One Giant Leap? Without going back and looking, I'm pretty sure it was in Don't Look Back. — RyanGibsonStewart (talk) 10:06, 14 April 2007 (EDT) I took Ando's explanation and put it under the heading "Possible Explanations", along with Guillame's story about the serpent and the crane. I'm not sure "Possible Explanations" is the best heading title because it sounds like the section is speculative, which it's not. However, I can't think of a better alternative. "References to the Symbol" doesn't really work since it's too broad, and "Characters Talking about the Symbol" is too clunky, obviously. :) Any suggestions? -- RyanGibsonStewart (talk) 09:18, 13 June 2007 (EDT)

I notice that the symbol image gallery includes the sword hilt twice. But all of the other places it is found are only included once. Is there a reason for including the sword twice? I assume that the gallery is not intended to be so exhaustive as to include repeat appearances--that would be impractical IMHO. But it might be good to have one image for each place the image appears with a caption saying from where that particular image was taken along with a list of other episodes and GNs where the same version of the image appears. I notice that the image on Guillaume's necklace appears at the end of It Takes a Village, Part 3, in addition to the listed appearance from Part 1. It might be good to list that without adding a separate image. Naturally, there are other places, like Jessica's shoulder where the appearances would comprise a significant list of episodes and GNs.--E rowe 11:27, 13 June 2007 (EDT)

Just to throw it out there, but perhaps there is no meaning to the helix other than a running joke by the set dressers? It would be similar to finding "Hidden Mickeys" at Disney Parks. Disney42 02:03, 22 June 2007 (EDT)

Okay, according to message boards and Wikipedia, the Symbol appeared on the Primatech Paper lgo in Six Months Ago. Any screencaps of this? --Hero!(talk)(contribs) 16:43, 22 June 2007 (EDT)

I think I've got it

The obvious and recurring ones ( the sword hilt, tattoo, jewelery, etc) are integral to the show. The others ( the knives, diamonds, blood stain, Primatech logo, etc) are jokes by the lighting, costume, set, etc designers, like those of the Hidden Mickeys.

The ripped photo of Kaito and Angela had a symbol in red over each of their faces. That much is clear. But I also think the picture was torn along a curve that looks like the symbol. Perhaps an upload of the two parts when they hold them together will verify or falsify that.--E rowe 18:26, 25 September 2007 (EDT) Can anyone imagine that the HEROES Helix Symbol (slight plug...) is seen in the water "mark" a little to the right of Matt Parkman on the ledge, probably around where Kaito and the hooded guy left the building to test the effects of gravity (here is a screenshot or thumbnail to the right)?

If you tilt your head a little to the left and imagine the Symbol with the one roughly horizontal line going to the right and the two other horizontals at the bottom left, then it could be one of the "stealthy" hidden Symbols. What do you think? 'ROESian Under this interpretation, there are no "joke" insertions of it. The symbol's presence is either someone intentionally putting it there because they've been inundated with it, or the mark of the villain's influence- pretty much always in association with those who have powers or are very very close to those who do.

I'm not sure. I never gave it a second thought with Niki and Jessica, but Peter's mark made me think... I'm not sure it's a tattoo on either of them. I don't have something better to call it, but I don't think someone took ink to their arm or back to put in the mark. Something is up. Hopefully they'll explain it more.--Riddler 11:15, 14 October 2007 (EDT)

Symbol in Out of Time

Something that I do not get...

Tim Kring and Greg Beeman both state in the TV Guide interview that Niki just has a Split personality, and that her only ability is enhanced strength and has nothing to do with Jessica. But this would not explain the change in appearance. anyone else agree? Random guy 16:11, 11 November 2007 (EST)

Possible appearance in Four Months Ago...

Possible spotting of the helix?

I know this might sound a bit over seen, but im pretty sure the spots on clair's nose in the beach scene with west create the helix. heres a pic Click here for picture--Ofer1992 15:59, 2 December 2007 (EST)

i was on the images section for The Fix and saw two users had put a picture apparently with the symbol. so i was wondering if you agree it should be put here or just disregarded: tbh i can see where they are coming from but it just looks like car pipes :D

I'd need to see a high-res picture to be sure, but it looks like this new prophetic painting of the earth being split in two as seen in The Second Coming and The Butterfly Effect might have the symbol in it. The main crack is oddly curved and some of the other, more minor cracks seem to form rungs. Does anyone else see this? Sincerely, Thrashmeister [ U | T | C ] 22:00, 23 September 2008 (EDT)

Aw... it's the symbol, never implied it was a reference to Heroes, I just put it as a trivia because it's the same symbol appearing before the series Heroes even existed. It IS interesting, don't you think? --Heffeque 21:06, 3 October 2008 (EDT) I am sure this has been discussed before, but I couldn't find the discussion anywhere. I believe I saw a slightly Symbol resembling curve shape on Sylar's bloodied-up shirt during the last two Heroes episodes in Villians. I don't have proper technology to pause or screen cap what I saw, and I believe there weren't any rungs. Can anyone confirm/deny this? I don't want to start seeing things that aren't there. --(P)uerto (R)ican (K)nock(O)ut

No no later. Try when he was in the elevator. It is smaller. That blood stain is only vaguely even kind of curved. There are other, more symbol-like blood stains. And I must agree; I only see Gumby in that pic.--(P)uerto (R)ican (K)nock(O)ut

Yeah that was the scene I was talking about. No symbol, just Gumby. I figured, I DID watch that episode seven minutes before midnight. --(P)uerto (R)ican (K)nock(O)ut

I didn' see anything for the mobile epesodes, has anyone checked them yet? Or is Evolutions both a interactive plot and a mobile series? P.S. has anyone seen it in nowhere man yet?--Hawkeye 09:58, 14 May 2009 (EDT)

I was rewatching Homecoming and saw this. As a side note, in Hachiro's study, The Symbol is only partially visible on the window if you glance between Miko's legs in Brave New World when she enters the study. However, it is definitely not there earlier in time (June 13th, Part Two). The main reason I know about it is from three promotional images that show The Symbol in the window with Miko in the study.--MiamiVolts (talk) 01:15, 8 November 2015 (EST)