Comic-Con International: San Diego is a convention held each year in San Diego. It is for comic-book fans in particular, and, each year, Heroes hosts a cast panel, where members of the cast answer fan questions.

Comic-Con is a yearly convention held in San Diego, California. It is a multi-genre event which at first covered only comic-books, television and film, but has now expanded into other areas, such as manga, animation and toys. It is traditionally a four-day event, spanning from Thursday to Sunday, although there is often a preview event on the Wednesday for pre-registered guests. The event is the largest of his kind in the world. 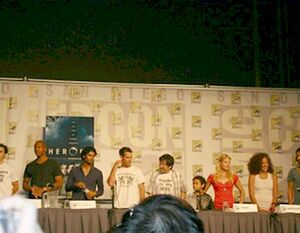 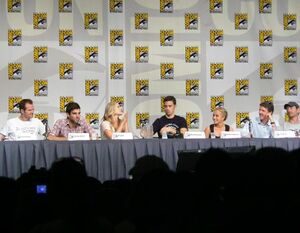 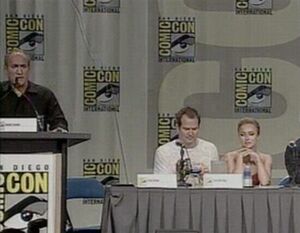 An NBC hosted video of the Heroes panel can be seen here.

The panel was introduced by Jeph Loeb and included cast members Greg Grunberg, Ali Larter, Zachary Quinto, Milo Ventimiglia, Adrian Pasdar, Dania Ramírez, Hayden Panettiere, James Kyson Lee, Sendhil Ramamurthy, Jack Coleman, Masi Oka, and artist Tim Sale. Creator Tim Kring was welcomed on stage with a briefcase handcuffed to his wrist, which included a DVD of episode 301 which was screened for the audience. The panel then answered several questions from the audience. Not very much new information was presented, but it is revealed that Cristine Rose has been upgraded to a series regular, and the Season Two DVD will include lost episodes that didn't air due to the writer's strike. 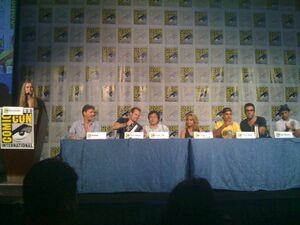 A few things about the 2009 convention were unlike previous years. First off, Nissan Cubes, stylized with Heroes-themed art were driven by the Nissan Street team in San Diego to promote the 2009 Heroes Comic-Con events. The art was painted on the cars by Peter Steigerwald and features scenes from Rebellion graphic novels that were drawn and colored by Jason Badower. One such Cube was given away by drawing each day at the 2009 convention (four in total). Visitors of the Heroes Nissan booth (#4029) could enter the drawing by having a Heroes cheerleader that worked at the booth scan their badge. They could also pick up a limited-edition print version of the Rebellion, Part 3 comic, for which four different covers could be collected.

Next, the panel for Season Four was presented in the Indigo Ballroom of the San Diego Gaslamp Hilton, and not in the convention building itself. Following the Volume 5 trailer, introductions were made by Attack of the Show's Blair Butler. Creator Tim Kring and cast members Jack Coleman, Masi Oka, Adrian Pasdar, Hayden Panettiere, Zachary Quinto, and Milo Ventimiglia, along with guest stars Robert Knepper, Dawn Olivieri, Ray Park, and Madeline Zima, were in attendance for the Q&A session. The trailer, and Q&A session (Part 1, Part 2) are viewable on YouTube and at NBC.com.

Finally, a free carnival, sponsored by Sprint, was held outside the Gaslamp Hilton with Heroes-related activities from the Friday through Sunday concurrent with the convention. Called the "Sullivan Bros. Carnival", it included free games, food, and a bungee trampoline, along with exclusive footage and photos from the new season. Cast members Robert Knepper, Dawn Olivieri, and Ray Park appeared for a signing from 1-2pm on Saturday before the panel. Raffle drawings were held at the carnival for signed scripts, T-shirts, and other collectibles. Comedian Robert Baxt was emcee for the carnival's raffles and cast signing. 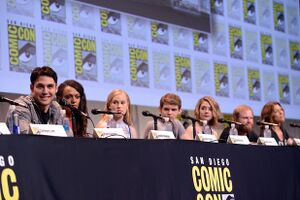 The Heroes Reborn Panel in 2015