Daniel Lawrence "D.L." Hawkins was an unemployed construction worker and part-time associate of Mr. Linderman of the Linderman Group. He lived with his wife and son in Las Vegas and became a fireman. He was an evolved human with the ability of phasing.

D.L. is very devoted to his family. After initially deciding to participate in the plan to rob Linderman of the $2 million in order to better provide for Niki and Micah, he backs out of the plan out of fear that Linderman will seek retribution against them. Even after he discovers Jessica set him up, he remains very much in love with his wife, and ultimately succumbs to Micah's pleas to return and help Niki overcome her alter ego.

Unlike some of the others, D.L. seems to actually enjoy using his powers (possibly because they pose no real threat to others) and has made no effort to conceal them from those close to him.

For an episode-by-episode summary, see D.L. Hawkins: Season One History. 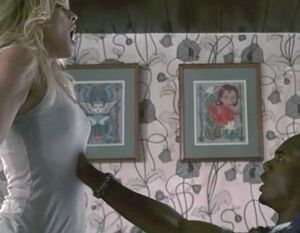 D.L. protects himself from Jessica.

The estranged father and husband of Micah and Niki Sanders, respectively, D.L. Hawkins is said to have escaped from prison somehow and is on the run from the law. According to Niki, he robbed Linderman of two million dollars and murdered his own crew. He is a high-priority fugitive, and thus the Las Vegas Police Department offer to protect Niki and Micah when D.L. is spotted at a nearby convenience store. This protection fails, however, as D.L. manages to sneak into Niki's house and meets her. D.L. tries to convince Niki that he was framed for his crimes, and he wants to be a part of her family again in order to raise Micah. The couple reconcile and D.L. reunites with his son.

The next morning, D.L. explains to Niki that he knows someone who has some information on the person who framed him. They go to meet these people only to find them ripped apart. Later DL catches Niki listening to Jessica and getting the money from the rafters. They fight, and DL leaves with the money and Micah. They are then on the run. Micah gets angry at his dad and wants to go home, but they keep running. At one point, they stop at a car crash, and DL uses his powers along with Hiro to save the people inside. He and Micah leave again when he learns that Ando has called the police. When they stop another time, Jessica tries to snipe him, and only one bullet hits, the other, he phases through. They then find a cabin in the forest and rest there. 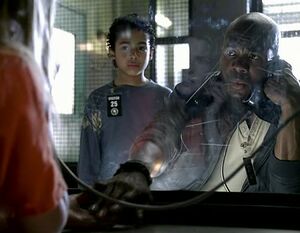 D.L. tries to comfort his wife.

Later, Jessica finds the cabin and they start to fight. Micah tries to break it up, but Jessica pushes him out of the way, slamming him into a rock. DL and a now in control Niki, comfort him, before Niki decides to turn herself in for Jessica's crimes. Over the next few episodes, DL is struggling to be a good parent to Micah until Niki comes back. After she comes back, he becomes suspicious and uncovers Jessica's work as an assassin. Jessica finally comes to terms with DL, and they go to New York to rescue Micah. At the Kirby Plaza building, they temporarily team up with Matt and Noah. They locate Linderman in his office, and Niki resurfaces as DL takes a bullet for her. He then phases his hand into Linderman's head, killing him. An injured DL phases out of the room with Niki as the guards rush in. DL is left in the hallway as Niki goes to find Micah. Later, Mohinder and Molly find him just as Niki and Micah return, and Micah gets them out by telling the elevator to open. When outside, all DL can do is watch the fight and explosion. 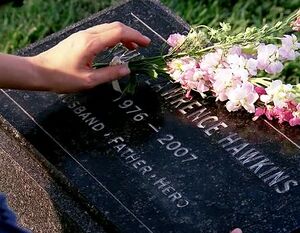 D.L. appears in Niki's nightmare when Maury gets into her head. D.L. persuades her to try to kill the others, then is shot by Bob, another illusion created by Maury.

D.L. is known to survive the attack on Mr. Linderman. He heals and goes home with Niki and Micah. However, when Niki does not take her pills, she becomes someone else again and goes to Los Angeles. Meanwhile, D.L. uses his phasing ability to rescue a girl from a burning house as a firefighter. D.L. discovers a message in the mirror and immediately heads for L.A. When he arrives, he shows a man at a club a picture of her and the family and is directed to her dancing with another man. He gets her away, and the man punches him in the head, only to find that it phases through. D.L. subdues the man and takes Niki with him. Minutes later, as Niki and D.L. are about to leave the club, the man approaches D.L. and shoots him point-blank in the chest, killing him.

D.L. trains to become a firefighter. For his test, he is paired up with Captain Burke, a firefighter who constantly puts him down. When inside a burning home, the fire causes part of the building to collapse, trapping the firemen. As the firefighters try to escape, D.L. phases into the basement. There, he thinks of Micah and how he would be proud to see his father using his ability to help others. D.L. turns a valve, saving the other firefighters. When he exits the building, Burke welcomes him to the department, and tells him to go home and tell his family that he is a hero.

Pictures of D.L. are included in a shrine at Niki's funeral in the Dawsons' home.

When Micah's computer searches for information, some of the files are D.L.'s, including his inmate record card from Clark County Prison and an article about his sentencing.

Mohinder remembers D.L. being at the battle against Sylar in Kirby Plaza.

In order to get Molly Walker to help the Rebellion, Micah tries to sympathize with her by saying that he knows what it's like to be all alone because your parents are dead.

D.L. had the ability to phase some or all of his body through solid objects. He had used his ability to walk through walls, pass his arm through a window, open locked doors, and injure other people by phasing through their bodies.

Please refer to Theory:D.L. Hawkins for fan-created theories and other speculation.