I noticed that on an earlier talk page someone mentioned that this season is mirroring things that already happened...just thought I'd point out Sylar in this episode and Peter in season 2, both of which had:

Carnival Scene at the begining

Considering that hysterical blindness is really a conversion disorder where people are seeing things (or not seeing things), I think Claire's storyline would be a good one to use as the lead image. A few choices: when Gretchen kisses her, when she looks out the window with Becky standing right there, or when Becky purposely knocks over the books and Claire is in the background. Any thoughts? -- RyanGibsonStewart (talk) 00:03, 13 October 2009 (EDT)

In the interest of sparking a friendly debate, why did Sylar (as Nathan) revert to his original form after being "killed" (shot to the chest) and burried; yet the original shape-shifter, James Martin, kept the form of Sylar when he was killed? My only explanation is it boils down to Sylar's powers instinctively restarting/taking over, but I don't know why that would force him to change his form. It seems kinda deus ex machina to me.--Halfxwitted 01:05, 13 October 2009 (EDT)

The Carnival Can Teleport Away?

I noticed that at the end of this episode, Sylar ran into the carnival and then when the police followed him it was gone. Does that mean there is an illusion over it that renders the carnival un-seen or it was teleported away by Arnold.. Or did the police just go a different way then Sylar, and the writers are trying to trick us? 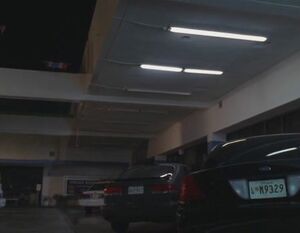 Wow. That was a really good episode, and Tracy wasnt even in it! Also, the trivia bit says Greg Grunberg was credited for saying the 'previously', but i did not see a credit. I changed it slightly...if anyone can repute that he was credited then fine, i may have missed it but i could have sworn Masi Oka was the first to be credited. TracyStraussFan 09:35, 13 October 2009 (EDT)

I really liked the scene where the kids were singing a song at the hospital. Peter sees the colour, and then sees Emma seeing the colours. There was no conversation but you can tell what they were exchanging and thinking. Wonderful. --JLYK

I really like the last scenes, starting with Emma finding the cello. It's different from what the show has used in the past, it's very ellegant, the transition between Emma playing the cello to the other scenes, but keeping the cello as the background music. The crescendo when the scene changes back to Emma and her apartment starts to shake because of the cello, and the slice in the end, I'd like to think that Emma's character will grow, just like that scene. Intuitive Empath - Talk - Contributions 10:20, 18 October 2009 (EDT)

What are we doing with her power? Heating? Induced Radioactivity? Microwave Emission? Or are we just gonna call it Camise's ability, the ability to have one's hand shine brightly and cook waffles? Josh KorolenkoUTChronicles

Temperature manipulation! Or even better - Wafflekinesis...

Perhaps she has an ability similar to Matt Parkman Jr. in the fact that she can make objects work without being plugged in?--Halfxwitted 15:11, 13 October 2009 (EDT)

Temperature manipulation actualy sounds like a good idea since we already have it listed. We dont know if she can also reduce temperatures, but I'd rather avoid another one of the power debates again. Let's just hope Ryan can get a clear answer from the writers into what power we saw with the waffle-iron lady. And if they say "I DUNNO WAFFLECOOKINGKINESIS LOL", I will probably develop Ted's power and detonate myself.--Piemanmoo 02:58, 14 October 2009 (EDT)

The closed captioning spells the name "Comey", and Samuel refers to her as such. It sounds like "Comise" because he's saying "Mrs. Comey's waffles." "Comey's" = "Comise", soundalike-wise. I've edited the character appearances accordingly for now. --CourtesyofTVRage.com 10:50, 13 October 2009 (EDT)

I see someone renamed the character as "Camise Comey." Her first name isn't mentioned on-screen, so was there a source for it? --CourtesyofTVRage.com 04:26, 14 October 2009 (EDT)

Sylar has reverted to his real shape, so... Nathan is gone for good?

Waffle Cook has an ability?

The elderly woman cooking the waffles at the carnival has an ability right? She was heating the waffle cooker with her hands touching it (her hand turned red when she wanted to heat them). Any ideas what this ability might be?--Catalyst · Talk · HL 18:47, 13 October 2009 (EDT)

Theory about what happened to Sylar

My theory is that when he regenerated, it caused him to turn back into his normal form. Also, my theory is his regeneration being reactivated caused the damage to his brain caused by Matt's telepathy to be healed (remember Linderman said using telepathy like that left scars which he was able to heal and Peter was able to use regeneration to heal what the Haitian did to him) and erased the Nathan persona, but since the Sylar persona is stuck in Matt's head, there's nothing there unless Matt returns Sylar to his own body which should fix things.--WarGrowlmon18 12:28, 14 October 2009 (EDT)

Maybe include a small blurb about Milo's mini-short film thing that involved Masi; the one at the start of a commercial break? I'd assume it would go on the Trivia section...but perhaps maybe it is just suitable on the Heroes Wiki Main Page.--Halfxwitted 12:33, 15 October 2009 (EDT)

Peter is a horrible person!!!

There is no way he has got any type of empathy back yet. When he couldn't run fast he was so angry that he kicked a trash can and it rolled a distance away. He was so inconsiderate of whose trash can it was. That person now has to walk a distance to pick up a dirty trash can just because Peter had a tantrum. Well "boo hoo". What a beep! --mc_hammark 18:36, 15 October 2009 (EDT)

Clips can be found at http://heroes.wrgn.org (Current ones are on main page)

Even though it appeared only twice, and they were two different cellos, I think we should consider making an article about the instrument. It appears the cello might be a recurring object for Emma, and we have already seen a cello in Bob's office a couple times. Intuitive Empath - Talk - Contributions 15:47, 19 October 2009 (EDT)

In the summary for this episode, it says Becky arrives with the other sorrorities to welcome in Gretchen and Claire, when I watched it again Becky wasn't there...! Is this just me or does anyone else notice it? Sorry if this seems a stupid question to ask --Ellexoxo 16:41, 25 October 2009 (EDT)