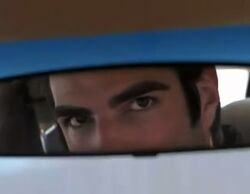 What an amazing line, sort of like when Sylar shouts "CAKE?" when he murders Sue Landers. After writing for like an hour of summary I have to admit that ending was really awesome, Noah just passes out and Peter has such a cute smile as he goes "We'll get him somewhere safe" but it's just so hilarious how they just literally appear and take him off like ninjas. --Arkillion 08:15, 17 February 2009 (EST)

I think that Ando is finally going to have a proper role in this section for he is going to be the one to power Peter so that he can take more than one power at a time.

Nice theory. But I think that Peter's power is going to evolve by itself. But maybe, if there will be a confrontation, Ando could help Peter that way.--Alen76 09:48, 17 February 2009 (EST)

It would make more sense if Claude reappears and teaches Peter again. He's still alive somewhere. Or maybe someone else, or maybe Peter will have to learn by himself. Ando can only amplify; with his power Peter could pick up on a bigger range. (see: when Ando amplifies Parkman, it boosts his range, not his strenght on minds nor his "level" (seeing images for example).)

The NBC website says that Dania Ramirez will star in this episode. Is this true, or are our sources wrong yet once again about Maya? (Dania was said to be in several episodes that she wasn’t in, in the last volume.) However, her being in the last graphic novel suggests that we haven't seen the last of her character after all. Any thoughts?--Mohinder613 (my talk page) 14:28, 10 February 2009 (EST)

I loved this episode. The scene with Tracy's escape was wonderful; I was glad to see her victim wobble a little instead of simply stiffening. Sylar and Luke are great. Also, from a show that rarely plays contemporary music, I was overjoyed to have Sylar serenaded by one of my favorite songs, Psycho Killer by Talking Heads. Great one altogether. Kortu 22:12, 16 February 2009 (EST)

Who is being hunted?

Nathan had a nice little bulletin board with a lot of pictures. Can anyone get a screenshot or two of the board so we can start identifying people? If you have a 10th wonder account, post it on this thread, please: http://www.starkvilleforums.com/showthread.php?t=1974 Timebender13 22:41, 16 February 2009 (EST)

Okay, Building 26 currently redirects to the actual building. This is somewhat problematic, especially since the link on the front page even redirects there. What can be done? --Crazylicious 23:26, 16 February 2009 (EST)

It's the agents that are going to be the biggest killer. I didn't include them in Template:AppearancesBuilding 26 because I'm not sure which is which. It doesn't help that the names aren't very descriptive, and that we're missing images for one of them. I'll have to go back and really study the episode to figure out which is which. If somebody else would like to do that, it would sure save me a lot of time! Thanks... -- RyanGibsonStewart (talk) 00:53, 17 February 2009 (EST)

The diner where Sylar and Luke stop

According to the sign on the window, the diner where Sylar and Luke stop is called Olympic Coffee Shop and Diner. I think the sign outside the building said Olympic Coffee Shop and Restaurant. One should link to the other. I'd go with "Diner" as the main article, and "Restaurant" as the redirect. According to the writing on the police cars, the building is in Illinois. Oh, and don't forget to include the ZZ Top guy! -- RyanGibsonStewart (talk) 00:59, 17 February 2009 (EST)

Christophek has added an out-of-world, third person synopsis so I took the liberty of removing it and mentioning it at his talk page. Is that okay with all in question? -- Tristan0709 talk 03:59, 17 February 2009 (EST)

After Sylar breaks the windows, he and Luke jump outside. From some angles, the windows are still there. Intuitive Empath - Talk - Contributions 10:54, 17 February 2009 (EST)

Don't forget that there could be others doing what Clarie's doing. Going around and warning people. And besides they're only focusing on the big players, and not really characters like Alex. Also I don't think much time has passed. --Dman dustin 14:08, 17 February 2009 (EST)

Did anyone else catch the vibe of the bar scene? It seemed like Matt was very much getting revenge on HRG, as the last thing he remembered before his life turned crazy was seeing HRG's face across the bar. I thought it was a nice touch, something subtle I'm not used to seeing from this show. Compared to the "Gabe, I am your brother" schtick, it was a breath of fresh air. :) Product Placement 16:19, 17 February 2009 (EST)

I was going to edit the Songs article and throw in Born To Be Wild by Steppenwolf and Psycho Killer by Talking Heads, but I rewatched the last scene a few minutes ago and realized there was a song playing in the bar scene. Does anyone know what it was?

-I know my Steppenwolf and im almost certain that was a cover by some other band, i have no idea who, but thats no Steppenwolf. --HandsOffMyPeter 19:05, 17 February 2009 (EST)

I also think they'd drag Lyle out aswell because if ever Sandra and Noah would want a divorce, theyd want to divide their kids, and obviously Claire will end up with Noah while Lyle with Sandra. Then bye-bye Sandra and Lyle...forever! =D --NiveKJ13 (talk2me) 05:53, 18 February 2009 (EST)

I doubt they're getting cut out. Claire still lives there.--

How did they get to India?

Erm, really, how? Did Hiro suddenly get his power back, or were they able to hitch a ride somehow to India, even though they're on every government checklist imaginable, can't use credit cards, can't use cellphones, and there's no fliers/teleporters/speedsters?

So watching this episode I noticed some great stuff with Bennet family. Firstly, the return of Lyle and Mr. Muggles. Secondly, The parts toward the end with Claire confessing to her mother, and Sandra laying down the law with HRG. Also, I loved the part with Noah telling Claire hes moving out, it was touching. It was nice to see Claire react like a normal teenage girl, especially after all that Catalyst, over confident, defensive player of the year, crap she pulled this season. Sometimes I feel like the story develops so much that the characters stray too far away form who they were to start with, its nice to have moments like these to remind us who they really are. Overall, it was nice to see some real human drama in the episode. The past two volumes have been really action packed, sometimes too much so; lets hope that there are more moments like these to come.--Cairoi 14:19, 20 February 2009 (EST)

I'm just watching this again, and Nathan notes to Abby that "eagle rock prison" will not hold the specials as he'd wanted. Is there such a place? I looked it up on google, but all I got was a music company Eagle Rock that sold some sort of dvd of Johnny Cash singing from "within the prison walls" or something like that. Does anyone know anything about it? --mc_hammark 19:10, 5 March 2010 (EST)