From Heroes Wiki
< NYPD
Jump to navigation Jump to search

This article archives the history of NYPD during Season One.

For more about NYPD, see the main article.

While Peter and Nathan Petrelli are talking at Nathan's campaign headquarters, Nathan gets a call and finds that their mother Angela has been arrested for shoplifting.

Peter and Nathan meet their mom at a NYC police station where they find out the prosecutors have dropped the charges and that it's no big deal. Nathan berates her for getting arrested when he's trying to get elected to Congress. He blames her behavior on her husband's death six months prior and tells her to get over it. Peter manages to convince Nathan to leave and then tends to his mother. His mother says Nathan is like his dad, unlike Peter.

Hiro arrives at Isaac's studio and finds the door unlocked. He enters, and finds several paintings of the symbol and an unfinished page from 9th Wonders!. He notices a trail of blood on the floor and follows it to a gun, which he picks up, and finally to Isaac's body. 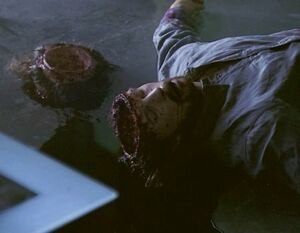 The top of Isaac's head has been sawed off and his brain removed. Just then, police storm into the studio with guns drawn, and Hiro faints.

When Hiro comes to, a detective questions him using another detective, Detective Furakowa, to serve as an interpreter. The detective notes that Hiro has no passport, no I.D., and no American money. Hiro tells them that he teleported himself from Tokyo, "like Star Trek", and tells them that if he can call Ando, he'll be able to straighten everything out. Ando tells the Furakowa that Hiro has been missing for five weeks. Hiro insists it's only October 2nd, but the other detective shows him a newspaper dated November 8th, with the headline "Petrelli Wins in Landslide". Just then, Hiro hears an explosion and turns to see an atomic blast over Manhattan. He focuses hard and finds himself back on the subway in Tokyo.

From Isaac's apartment, the detectives watch the explosion with Hiro. Hiro escapes by teleporting back to Japan.

Two NYPD officers go to Sylar's apartment with Mohinder and Eden--they are all surprised to find it empty.

Peter tells Nathan that Isaac Mendez shot Simone Deveaux and Nathan asks Peter if he called the police. When Peter tells him he didn't, Nathan offers to make an anonymous phone call to the police.

At Isaac's apartment, the police knock at the door. Isaac answers the door and the police, led by detective Jeff Tracy, show him a picture of Simone and ask if he's seen her lately. Isaac explains that they broke up recently and the police tell him that they received an anonymous call that she may be injured. They ask to look around, but then Simone shows up at the door and asks what's happening. Seeing Simone the police apologize for taking up Isaac's time and leave. Isaac marvels that Simone is alive. Mr. Bennet enters the apartment and upon seeing Simone remarks that she's quite useful. Candice drops her illusion, revealing she's not really Simone, while Simone's dead body reappears on Isaac's bed.

At the crime scene of the flipped van, a fat cop and a skinny cop find Ted's dead body inside the vehicle. The fat cop mentions that the top of Ted's head came off and asks how it happened. FBI Agent Audrey Hanson offhandedly says that he doesn't want to know.