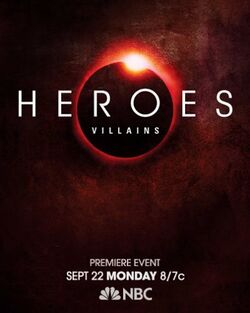 The third season of Heroes began airing Monday, September 22, 2008, beginning with Volume Three: Villains and concluding with Volume Four: Fugitives, ending on April 27, 2009. Volume Three begins with the assassination attempt on Nathan, and the consequences it has in the future. In addition, several villains escape from the confines of Level 5, and the Company attempts to recapture them. Volume Four starts with Nathan telling the President about the existence of evolved humans and the hunt for said humans ensues.

The fourth volume of Heroes, titled Fugitives, starts with episode fourteen and span over the last twelve episodes of Season Three.