From Heroes Wiki
(Redirected from Interview:IStory follow-up)
Jump to navigation Jump to search 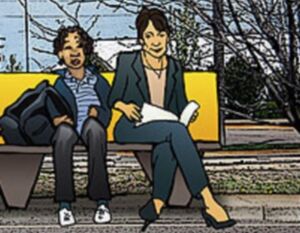 On May 23, 2009, Ryan Gibson Stewart conducted an email interview with Tom Inkel, the digital writer for Heroes. This interview was conducted as a follow up to a previous interview related to the iStory.

Ryan: Tom, thank you so much for answering some follow up questions from your previous interview. It means a lot to the fans to not only have their questions answered and get some clarification, but also just to know that the writers listen to them. Thank you. Okay, on to the questions!

Who portrays Brian from the Linderman election videos?

Tom: I'm afraid I don't recall, and I've tossed the call sheets. How about this factoid instead? Brian's nickname, brianundaunted, was a play on his full name, Brian Dante.

Doug is mentioned once in chapter 9, when Barbara calls out to him, to let him know a kid (Anna) was in the tent. Is he the same person as Bobby, the ringmaster/magician? If not, what is his ability? What kind of relationship do Doug and Barbara have besides working in the circus together?

I see a lot of circus questions, so a couple general notes about that: The circus and the many faces that have passed through it actually featured far more heavily in the original iStory arc. However, after the summer graphic novel arc was approved, we decided to cut back on Ellen/LAWR stories to avoid confusion with Rebel's team. The circus stories took the brunt of the cuts, many of them last minute. But I opted to go ahead and introduce as many as possible of the circus' residents anyway, in case we could touch on more of them in the future. There is a lot of story left to tell in Doug's little troupe!

Yes, Doug and Bobby are the same person. Bobby's name snuck in from a character cut in an earlier draft. Doug is his real name. Doug doesn't have a (known) ability. Barbara, the water-creating fake mermaid, is just one of the people who works for him.

Linda/Leona pointed a thumb towards the man and woman who are pretend-Siamese twins for the circus and appear to have some kind of phasing ability that lets them walk though each other. Then, she introduced Victor and Valerie. Are they the same people? If so, why did Anna say that they never talked to her, when the pretend-Siamese woman was the person to calm her down in the previous chapter?

Correct, the "pretend-Siamese" twins are Victor and Valerie. The reference in the iStory to them "never speaking" just meant that they were being silent while hiding in the old cellar. As seen in the other chapters, Valerie is usually talkative, while Victor only speaks to Valerie and close allies (or in Rachel's case, someone who reminds him of a close ally).

Also, what did Leona/Linda mean when she told Anna that they couldn't leave the circus until the twin was safe?

Leona was afraid that Valerie and/or Victor would be caught if they tried to escape while the agents were there.

Is Victor's and Valerie's ability related to their being twins? 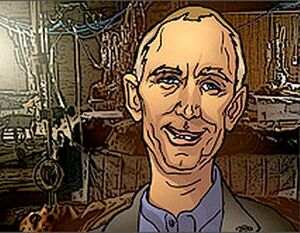 Victor is sort of Valerie's parasitic twin ... taken up a couple levels. Being "phased-together" might even be considered their natural state. Another way to consider it: they can act as one person in terms of their interaction with the physical world. Their phasing ability and item-swapping ability are really the same thing.

Were they in Bobby's circus when Rebel discovered them?

No, Rebel found them somewhere else. But after that, one or both of the twins were always at the circus, because the circus offered great cover for the stream of fugitives flowing through the underground railroad.

What can you tell us about the origins/history of Bobby's circus and how evolved humans began working there? Did Rebel help Bobby to create the circus?

The circus started as just another Ellen hideout. It was Doug's idea to start hiding some specials in plain sight. I'm actually going to hold off on giving more details about the circus, because we might be able to revisit Doug's little troupe someday soon.

The symbol for "Ellen", the underground railroad, was described as a hammer surrounded by four stars. However, an image of it was never shown. What is the correct placement of the stars (horizontal and at 90 degrees, or at 45 degree diagonals)? Any chance the image is already designed somewhere? :)

A vertical hammer with stars at diagonals is the correct layout. It looks a bit like the Shoofly or Bear's Claw patterns that people used to put on quilts to signal slaves using the Underground Railroad during the Civil War.

Ironically, this is a question that under other circumstances I might have been asking you. The project from which iStory was taken last fall had many tasks for fans such as "upload an artist's rendering" of a detail mentioned in the story. Then the best art would have appeared in future chapters. This Ellen symbol would have been a classic example of one of those fan tasks. 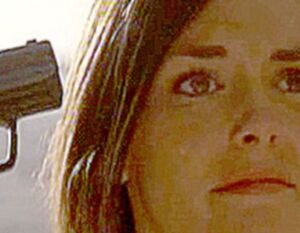 In the story, who came up with the idea for this "Ellen" symbol? Is there actually an "other team" Rebel started that Leona tells Anna about, or did she make that up? If it actually exists, do we know the people already on it?

The fugitives came up with the Ellen/LAWR symbol. The fugitives' eagerness to put names/signs to everything caused Rebel/LAWR/Ellen a number of headaches, particular when Howie gave away the fact that LAWR and Ellen even existed.

There definitely are other teams that Rebel works with, one in particular. You know some details about it already, but you will learn much more soon.

Is Barbara in the iStory same person as Barbara, the triplet of Tracy Strauss to whom Dr. Zimmerman referred? If not, was she originally meant to be? When Barbara almost drowned Rachel and Janey, did she become water herself or did she just generate water from her hands?

The "mermaid" Barbara can turn air into water, even at a (short) distance. She doesn't have any control over it once created.

No offense meant on this question...but is Crazy Tom named after you? Does this character actually transform what a person is wearing, or is he creating an illusion? Can he transform things that are not worn?

Crazy Tom was a special person in Linda/Leona's life, and we ended up not being able to talk about that much in the iStory. Maybe he got my name as a consolation prize!

Crazy Tom can create short-term illusions over whatever he is touching. This was clearer before the circus cuts: e.g., in one cut scene, Crazy Tom teases no-nonsense Rachel (Rachel was originally in the agent war at the circus) by claiming that he's not wearing anything under his illusion. They went back-and-forth like that for most of the battle.

Will we find out why Leona chose the name Linda Niles? Did Leona know of Linda Tavara? Does Leona transfer life force to and from herself like the Wraith? Or is something else going on with her ability?

"Linda Niles" is just a name Leona picked that sounded enough like hers to remember but not so much as to catch attention. Leona doesn't know about Linda Tavara.

Leona's power is to transfer aging (in either direction). So it's a bit like a vampiric version of The Russian's ability in the Comrades graphic novels (although she can't become younger than the age at which she manifested, and she ages quickly if she doesn't compensate with her ability. She has a pretty brutal manifestation story, actually). Leona can't heal herself or absorb abilities or anything like that.

Mary Krause's blood appeared to be acidic, and we have been told that was due to her ability. Can you tell us anything about the drug/gas that was applied through the fugitives' noses to keep Mary and the rest of the fugitives unconscious?

If there's a detailed explanation of how the coma drugs work, I have not seen it, unfortunately. 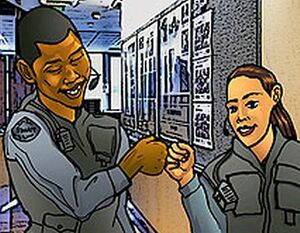 Is "Eric" from the iStory actually Thompson, Jr. from last summer's graphic novels?

Yes! Thompson Jr. has had his own journey over the last few months, and I wanted to keep his name alive on the fan side.

At the end of chapter 12 of The Agent, the story says that "Janey hasn't been seen again. Yet." Will the iStory continue throughout the summer? Did Anna eat her Wheaties? :)

The iStory is on hiatus while we work on a special project for the summer. When that launches, you'll see a few familiar faces return in a brand-new story arc that feeds into next Volume. That's all I can say right now! In meantime, keep an eye on the graphic novels for the rest of the story about Micah's "other team"...

Thanks so much, Tom! We look forward to the great stories you and the Heroes writing team create and present to us. Keep up the great work!

For the original interview with Tom, see Interview:iStory.